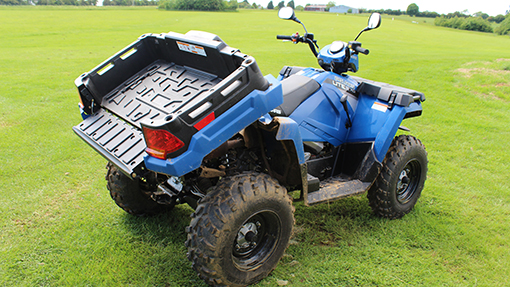 Polaris has launched a new version of its Sportsman 570 ATV that’s been specced specifically for hill farmers.

Called the 570 UTE, it’s been given a 180kg tipping rear load box, hill descent control and power steering as well as a full set of lights and indicators. Rated towing capacity is also pretty good for an ATV of this size at 556kg.

The hill descent system is likely to be one of the bigger draws for hill farmers. As soon as the bike starts pointing downhill brakes kick in on all four wheels and take it down in a controlled manner. This should put an end to those hair-raising runaway moments some people had with early CVT bikes and buggies.

Electric power steering and a narrower seat should also make life more comfortable when you’re clocking up the hours.

Strip back the extras and the new model is pretty similar to the standard Sportsman 570. In the power department there’s a single-cylinder 570cc petrol engine that pumps out 44hp – 22% more than the maker’s old 500cc block.

This is fuel injected and drives through a two-speed CVT transmission, which is controlled via a yankable gearstick on the right-hand side. It’s also got an automatic four-wheel drive system that kicks in and out depending on the amount of wheel slip.