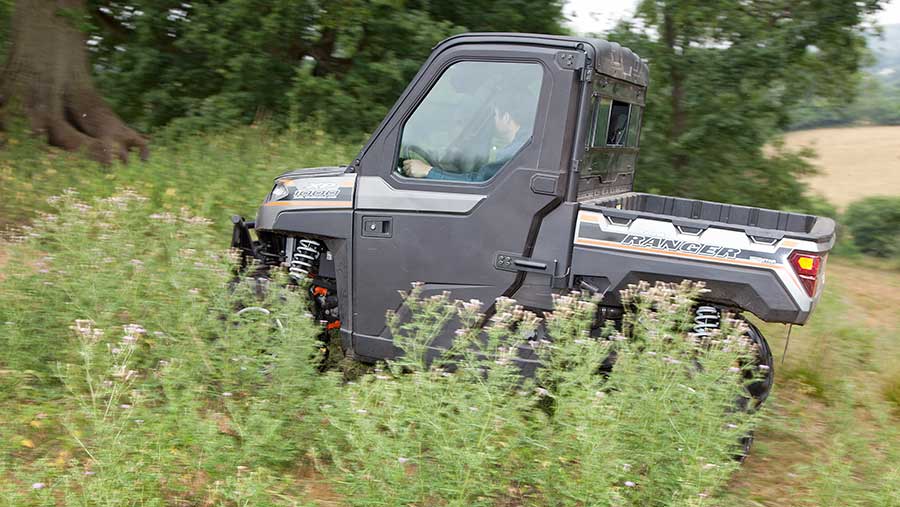 Up next was the Polaris Ranger XP1000. This high-powered machine is a complete animal, which makes it good fun to drive, but pretty dangerous in the wrong hands.

The high-powered XP1000 brings top-drawer ground clearance, long-travel suspension and car-like spec levels in the cab, but the build quality is a little disappointing and it has a worrying habit of sliding out of control on downhill slopes. We’d opt for the tamer version.

The XP1000 packs a mighty 82hp and 83Nm of torque from its 999cc twin-cylinder engine and has the sort of pants-soiling power to rival older pickups and small cars.

One look at the dash dials tells you all you need to know about its performance – the speedo has readings up to 140kph and the rev gauge tops out at 10,000rpm. It has the testosterone of a rodeo bull, which is good fun if you like driving like a nutter, but gets a little tiresome during work.

It often feels on the edge of being out of control at high speeds and, with very little to protect the driver in a crash, needs to be driven safely and well below its limits to avoid accidents.

In reality, the steady-as-you-like nature of the Gator is far less stressful for sheep-feeding duties.

The perk of the power is that it doesn’t flinch when hooked up to a trailer and it clocked a similar time to the equally fast (but more stable) Can-Am and the farm’s Toyota Hilux pickup on our mile-long uphill road route.

It came out marginally slower on the steep grass bank climb, but it was a question of traction – rather than power – that limited its

Top-spec Rangers come with a car-like cab that brings previously unseen UTV luxuries such as electric windows, a radio (that tends to get drowned out by engine noise), a proper indicator stalk, air vents all round and various charging ports.

At first glance, it promises a lot and all the fancy extras naturally make it more appealing than the likes of the crudely mechanical Honda. However, there’s far more to go wrong, too.

The build quality lags a long way behind the Can-Am, and the cab plastics feel fairly cheap and tacky. We also had reliability problems, including glitchy electronics that caused the dash screen to flicker on and off, and intermittent power steering.

The cab is shallower than some of its rivals too, but there’s plenty of room for three, access is good and the passenger bench folds up to reveal extra storage space. There are lots of cubbies dotted around the dash, but most are small and not particularly useful. 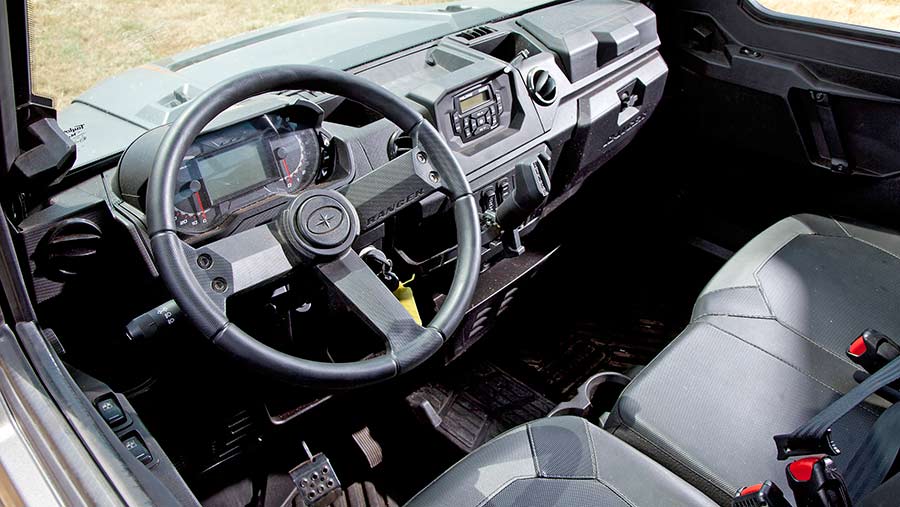 Many of the XP1000’s racing-grade characteristics are useful in work.

For a start, the nutty power means it’ll pull a trailer with ease – it’s rated to 907kg, which is seriously impressive by UTV standards.

Suspension travel totalling 28cm allows it to bounce and bumble its way across pretty much any terrain and it has the best ground clearance, so deep ruts are no problem either.

However, that height and bounce make it fairly wallowy around corners and also means the load bed sits much higher than the likes of the Gator and Traxter.

The bed is tough and can be tipped from both sides, but the rear light clusters look vulnerable and the lash-down points are poor. 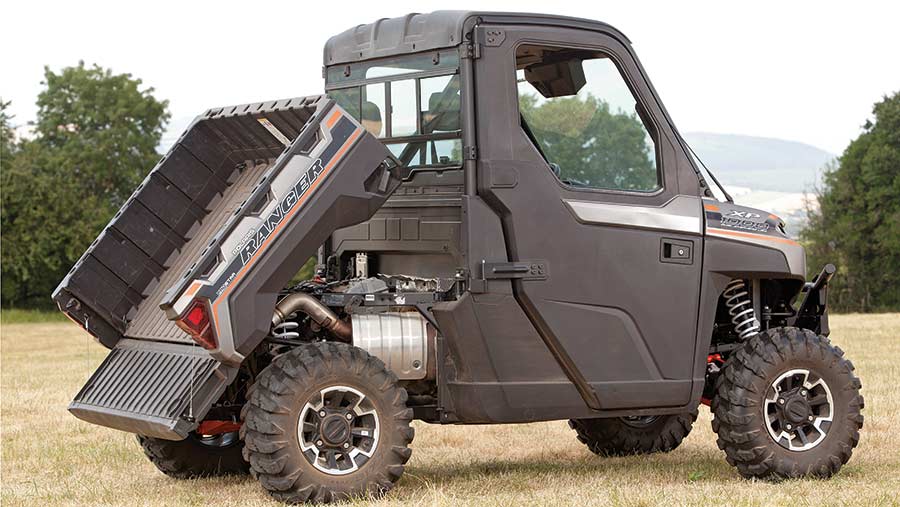