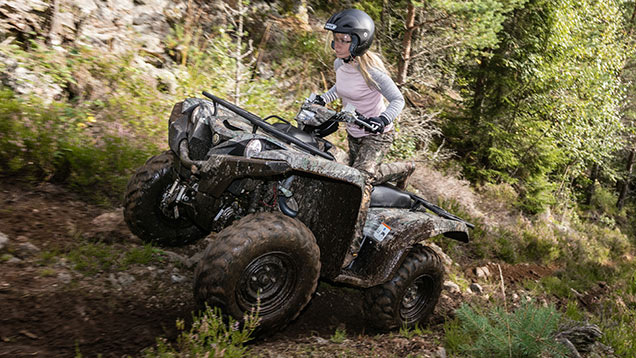 Yamaha launched an all-new Grizzly 700 last week in Norway. Emily Padfield went along to see it.

Like the market for tractors, the trend for ATVs is for larger, more powerful bikes. The new aggressively styled Yamaha Grizzly 700 claims to offer just that, but in a compact and manoeuvrable package with a weight of just 314kg.

More than 20,000 Yamaha Grizzly 700s have been sold since 2007, when the last model replaced the Grizzly 660. The 2016 Grizzly 700 is the successor to this model and sets out to be a benchmark for big bore utility ATVs, according to Allen Hidding of Yamaha Europe.

The major change is with the engine. A 708cc single four-valve engine that promises 9% more torque and 6% more power over the previous model, alongside a higher air intake with greater cooling capacity.

This is mated with Yamaha’s Ultramatic CVT transmission, which features a one-way sprag clutch that delivers impressive all-wheel engine braking, so much so that you don’t really need to touch the brakes. A centrifugal clutch maintains belt tension and eliminates any slippage.

Electric power steering is pretty much standard nowadays and has been recalibrated for the 26in tyres the 700 is now shod with. The lightness of the steering depends on speed, steering torque and driving style.

The fuel tank has been relocated and now features a side fender filler cap to the rear. The shape has also been altered to sit under the back of the seat.

Yamaha says that it has a lower centre of gravity and the weight is spread more equally over the chassis, which should deliver more stability.

In place of the fuel tank up front there is now an additional storage compartment big enough to stow puppy-sized items, while there is still a watertight cookie-jar type compartment on the front fender.

At the back, the redesigned fenders also include a bigger new storage compartment, while redesigned front and rear racks each carry 5kg more at 50kg front and 90kg rear. Towing capacity is 600kg.

LED head and tail-lights, alongside a new handlebar light that follows the steering, should make for a decent lighting package, while at the same time keeping plenty of power available for accessories.