Tracked tractors are widely recognised as being the best means of putting serious horsepower to the ground.

They’re expensive to buy new, yet here in the UK we still lap them up – nearly 200 are sold each year.

That means there’s a significant park of second-hand tracklayers out there and some pretty reasonable prices on offer when you consider just how much muscle you’re getting for your money.

And to get a bargain you’re not necessarily talking ridiculously over-worked machines. Crawlers tend not to clock as many hours as conventional-wheeled tractors (they’re typically parked up in the shed for six months of the year) and so it’s not unusual to find 10- to 15-year-old examples with 5,000-6,000 hours on the clock.

While the latter offers just one chassis size in its STX Quatrac range, the other two split their twin-track line-ups down the middle.

Deere’s 8000Ts generally weigh in around the 12-13t mark and have three mid-rollers, while larger 9000Ts have a longer four-roller track-frame and tip the scales at just under 20t.

Challenger MT700s hit the ground at 14-16t and have a shorter track length with a trio of rollers, while larger MT800s go for a four-roller frame to spread their 20t bulk.

One area where the costs of running a tracked tractor start to mount up is in the sheer number of moving parts.

On a short-track JD or Challenger there are at least 16 sets of hub bearings and 40 on a Quadtrac. They all depend on having a healthy level of clean oil sloshing around them, and if a seal goes it doesn’t take long for serious damage to set it.

As an example, for a replacement hub, bearings and axle spindles on a John Deere 8520T you’re looking at well over £2,500/roller. Pre-2004 Quadtracs suffered premature seal failure but are likely to have had most changed by now.

To help spot a leak before it’s too late, Norfolk track specialist Eurotrack sells Clear View transparent plastic hub caps. A set of 40 for a Quadtrac costs just under £500 and it’s £320-£450 for Deere and Challenger twin-tracks – money well spent in our book.

But it is the tracks themselves that determine the true value of a used crawler.

Cleat wear is the most obvious means of judging how much life there is left in the rubber as it would be on a wheeled tractor. But with replacement belts costing anything up to £9,000 each, there’s a lot more at stake (See ‘Replacement rubber’ below).

It’s the inside of the tracks that really count, however. On Challengers and Deere crawlers, drive is maintained from the rear-drive wheels to the belt by tension. On Quadtracs, the drive wheel is toothed and requires positive engagement with the track-drive lugs to transfer power. Because of this it’s not unusual to see belts with missing lugs.

Take it into account but there’s no need for alarm bells to start ringing unless the machine has more than four lugs missing in a row.

Depending on soil type, rubber on the mid-rollers and idlers can either wear thinner or lose chunks through stone damage.

When the layer gets below 5mm then they need changing or re-rubbering, but it’s more likely that by that stage pieces will have started to flake off.

It’s the same story with the flat, inner surface of the belt – stones can gouge out lumps of rubber, exposing the carcass canvas and steel belts. That will clearly cause premature aging. 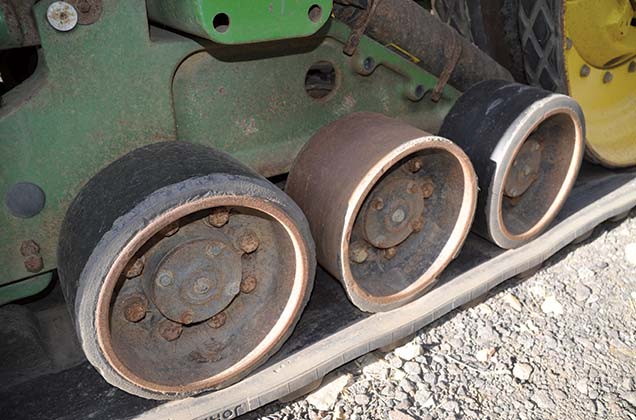 While belt width (generally 25in or 30in) is a factor to consider, it doesn’t really affect second-hand values.

However, it’s worth paying attention to what width mid-rollers, front idlers and drive wheels are fitted and whether they span the full width of the track. If they are narrower (often the case on older machines) and sit well in from the edge, the machine’s weight won’t be spread as evenly across the entire footprint and the shoulders of the belt can flex to a greater degree, which can lead to premature carcass failure.

All three brands use powershift transmissions to put power to the ground (although later Deeres moved to a stepless CVT).

To check it’s all working as it should, run up and down through the box, paying particular attention to the lumpier range changes. To check clutch pack condition, make sure it’s had a recent calibration and then holding the brakes on, ease the tractor into gear. If it takes a long time to engage drive then there may well be wear in the clutches, and if there is noticeable slippage then it is likely to be a more pressing issue.

MT-series Challengers had a recall in 2006-07 to replace an internal half-shaft retaining bolt that could fail. Main dealer-serviced machines will have had this done as a matter of course but those without a full history and grey imports may have slipped through the net. If in doubt, get the chassis number and ask an Agco dealer to check the machine’s history. If it fails, the damage done to the trumpet castings and back-end is eye-watering.

John Deere’s twin-track crawlers are generally good, solid workhorses but they do have a weakness. In the back-end, a hydraulic motor is used to divert drive to left or right hubs through the differential to steer the tractor left or right.

This has a tendency to fail on older, higher-houred examples and it’s a big strip-down job to change it where you’re unlikely to get much change from £5,000. Tell-tale graunching sounds and stiff steering can be signs the motor is on its way out. 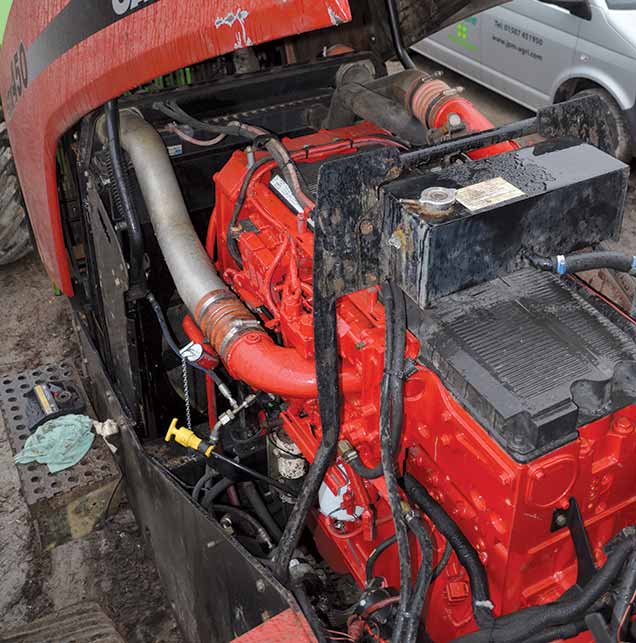 On Quadtracs, the steering pivot is an obvious area for wear. To check for slop, flick the tractor into reverse and ease the clutch out to biting point. The cab will rise and if it clunks back down again when you dip the clutch then there’s likely to be slack in the top pivot.

Strangely this 3D bearing is located at the rear of the tractor just above the top-link (the bottom bearing is at the central pivot and rarely gives trouble). To change it the tractor has to be split in half – not a quick five minute job.

As with all tractors, those that have done loads of linkage work are bound to be showing wear in the back-end. The most expensive item here is likely to be a splined cross-shaft. As an example, the one on a Challenger MT765 costs £567 and takes a day and a half to do as it requires at least one track unit to come off the tractor.

Engines are one area where there is generally little issue for these big prime-movers.

Although random mechanical failure is rarely an issue, as with anything a lack of maintenance can lead to problems, and the difference with these big engines being the repair bills can be pretty hefty. Ask to see some sort of service history if possible.

Often tracklayers are required to work in dusty conditions so intake air cleanliness is a must.

Frequent filter blow-outs and scheduled changes will help to extend engine life but it’s also worth checking the intake hoses for splits and perishing, as dust drawn in will score bores and help to burn out valves. As ever if there’s significant white/grey smoke from the breather and oil filler cap, suspect trouble ahead.

The CAT engine in earlier Challenger MTs had one small weakness that could prove catastrophic if overlooked.

The fan drive shaft bearings had a tendency to give out, which, if left untouched, could result in the whole unit working loose and smashing its way through the radiators – expensive.

Listen out for gravelly sounds from the bearings and give the shaft a good feel for play.

As we’ve established, it’s the running gear that determines the true value of a used tracklayer. 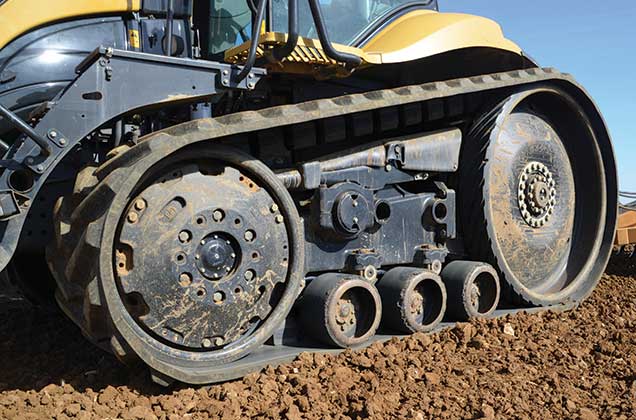 Belt wear on both the outside and underside is the key consideration but mid-roller and front-idler rubber also needs taking into account.

It all makes for some pretty simple maths. If track wear looks to be about 50% then you need to allow for half the value of new belts in the price of the machine. It’s a similar story for rollers and idlers.

Rubber track specialist Eurotrack sells Camoplast belts and running gear and is widely regarded as the place to go when re-rubbering a crawler.

Most tractor manufacturers now offer the company’s belts as an option on new machines and replacement rubber is often significantly cheaper.

Genuine replacement mid-rollers for Deere’s big, prime movers generally come in at just under £300. However, Cambridgeshire firm Clifton Rubber sells re-rubbered units for £200-£250 each. If you’ve got to do the lot (six a side) then there’s the potential to save £500-£1,000.

On a Quadtrac, a front or rear idler will set you back £740, while Clifton’s recon units come in at £350-£450. There has been some debate about the longevity of retreaded rollers and idlers but the company says it has worked on this and now expects its reconditioned units to last just as long as brand new rollers.

What to pay secondhand?

The price of a used tracked tractor will depend on so many factors but to give some basic guidelines we’ve looked at the most popular models and what various examples have sold for through dealers and Cheffins auctioneers over the past 12 months. 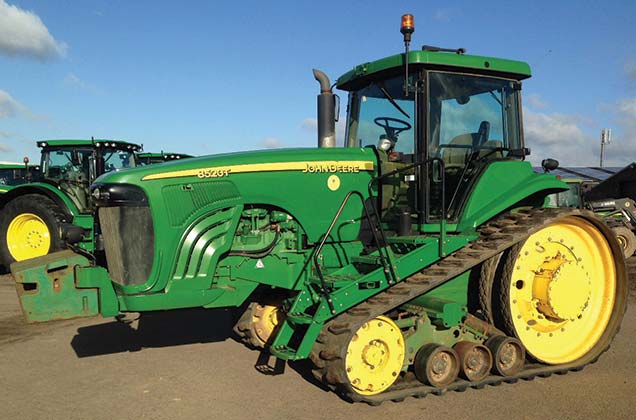 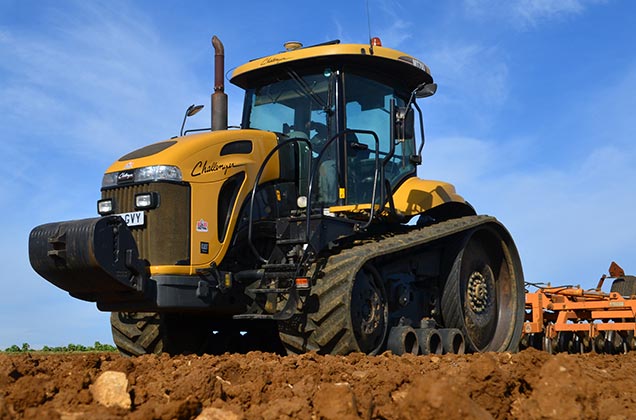 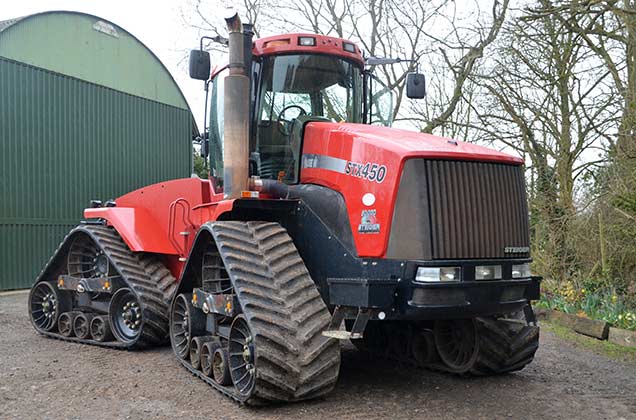 The specifications on all these US-built machines differ a fair bit but the main variation you’ll find will be whether they have linkage and pto, linkage only or just a drawbar.