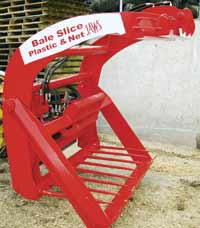 Slicing bales in two before dispensing them makes things easier along feed passages and in diet mixers – and now there are implements that deal with the plastic, too.

Hop off the tractor, hack through the film and netting, struggle to pull it off, get back on the tractor and, finally, drop the bare bale into a diet mixer (or ring feeder or along a feed barrier).

That’s currently the way most producers have to strip wrapped forage bales of their protective coats before dispensing them to hungry cattle. It takes time and a little effort, often involves balancing on the tractor’s front wheel or the side of a ring feeder – and has the unfortunate side-effect of leaving the operator with an odour that is none too popular in a warm farmhouse kitchen.

But there is another way – and that is to use one of two handy implements that not only prepare bales more effectively for the diet feeder but also remove net and film in one easy go.

“It’s a whole lot easier and 100% effective every time,” says Irish dairy farmer Alan Graham of the Keltec Bale Slice. He milks 100 cows at Rushfield in County Roscommon and supplies the implement as the

Moreway Bale Slice Jaws along with a few other products to supplement income from milk.

“It’s quick, easy and clean – you could do the job in your shoes and not go back in the house smelling of silage,” he adds.

The device, which is being distributed through dealers in Great Britain by Blakewell Services, Muddiford near Barnstaple, Devon, has a hydraulically-operated knife that cuts upwards from beneath rather than downwards from above – something that came to Thomas Sheedy of Keltec Engineering in a ‘eureka’ moment one night.

“It took an awful lot of figuring out to get right,” he says. “We’d tried cutting from above but the plastic can get in the way as it falls off first; then it struck me that cutting from below was the answer.”

The resulting implement has eight tines, making it useful as a general-purpose fork, and the cutting knife with its prominent blades on the upper edge. With the knife raised, it can be brought down to secure a bale or other material carried on the tines.

Once at the feeding area, the bale is slipped off the tines, the cutter arm lowered and the implement tipped forward so that the bale picked up again, this time between the knife and the curved frame section that arches out over the tines.

This is where the pair of 61cm (24in) plastic grippers are located; they clamp together to get a firm grip on the plastic and the netting beneath.

“There’s an advantage in gripping the plastic at the top of the bale rather than at the side,” says Alan Graham. “Once you’re in position, the knife is brought up through the bale and the silage simply drops from the plastic; a few shakes and it’s all out.”

The loader can then drop the plastic at a convenient spot for separation and storage until it is ready to be sent off for recycling.

“That can be done with a pitch fork, as well as picking out any remnants of silage, so there’s no need to pick up the material by hand,” emphasises Thomas Sheedy. “The boys like it for the speed and convenience; their wives like it because it gets rid of the smell!”

It is much the same story with the device that Tanco Autowrap now distributes as the I70 Bale Shear. This implement is the invention of a practical farmer who looks to find easier ways of doing things.

“A farmer complained to me that his bale cutter split the bale in the wrong direction for feeding in narrow passages,” says Liam Murphy whose Unique Inventions Company is based at his farm in Ballyragget, Kilkenny. “It prompted me to look at doing it differently.”

Having been inspired by the simplicity and commercial success of the Shear Grab for cutting silage from a clamp, Mr Murphy set about building a fork and grab combination that could take hold of a silage bale and cut it through from the side rather than across the centre. That way, the silage can be laid out along rather than across the feed passage.

“I got that working well enough and then thought about adding something to hold the plastic as the bale is cut,” he adds. “It seemed the logical thing to do to make the whole job easier.”

On the Bale Shear, the plastic pinch mechanism is mounted on the top of the back plate and is plumbed into the hydraulic circuit so it is the first thing to close as the cutting blade comes down. It does not open again until the blade is fully raised again, so the operator can easily control when and where to release the plastic.

With a bit of careful timing and movement of the loader, the two halves of the bale can be laid out along the floor in front of a feed barrier. They can also be dropped into a mixer or ring feeder.

The plastic is withdrawn in both processes. It can then be released at the storage point for the farm’s waste materials.

Liam Murphy built and supplied 20 examples of the implement to farms in Ireland before Tanco-Autowrap saw the machine’s potential and snapped up the marketing and distribution rights.

If having to cut through and pull off plastic wrap and netting is not an issue, then two alternative implements are available.

In standard form, the Bale Cutter mounts on a tractor’s three-point linkage but an optional Euro interface makes it suitable for use with a loader or telehandler.

The downward cutting knife can be used as a grab to secure a bale carried on the tines during transport – but as yet there is no mechanism for capturing the plastic wrap.

The same goes for McHale Engineering’s Round Bale Splitter. This linkage-mounted device carries a bale end-on – all the grabs pick them up from the side – and slices it end-to-end using a large hydraulically powered blade.

Watch a video clip of the Keltec Bale Slice.

Watch a video clip of the Tanco Bale Shear.

Watch a video clip of the McHale 994 round bale splitter. 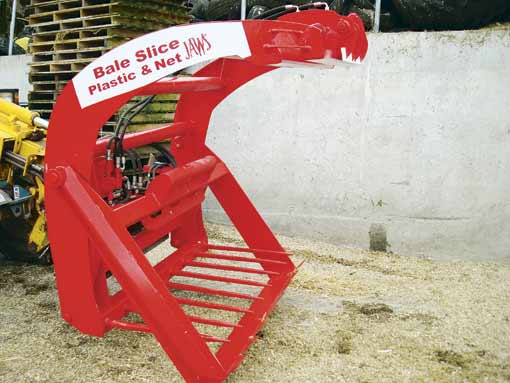 Clamps on the arching frame of the Keltec Bale Slice take a firm grip of plastic wrap and netting. 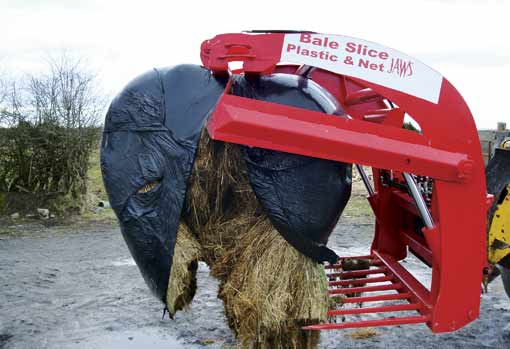 Upward cutting knife slices through the stretch film wrap and its contents.. 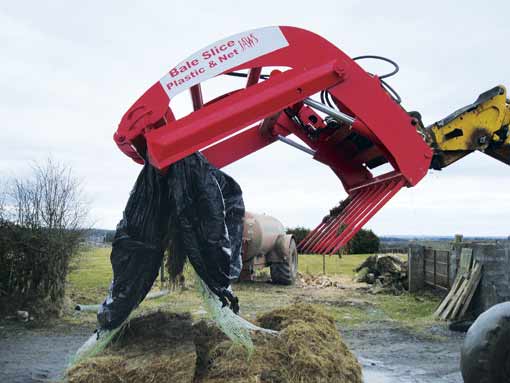 ..but keeps hold of the plastic as the silage falls away to a diet mixer, ring feeder or feeding passage. 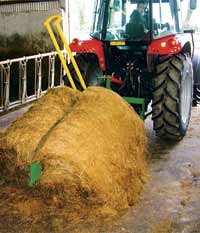 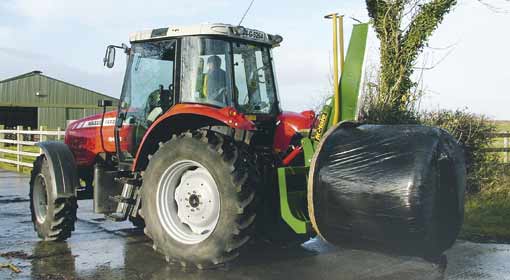 ..and then cutting it in half to make it easier to spread the silage along the feed barrier.