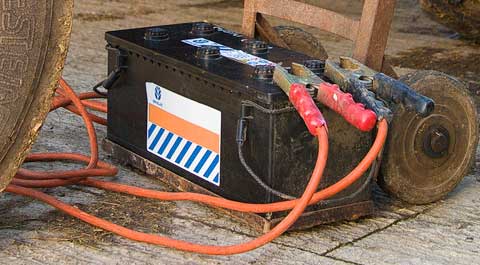 The first in a two-part series in which Andrew Pearce explores the life and times of batteries.

Some batteries die before their time, others, make it to a ripe old age. Either way, they have a finite life and can’t go on forever.

This two-part series explores the main types used in agriculture, explains why they fail and goes on to assess two bits of technology which, respectively, diagnose battery condition and attempt to recover seemingly dead items.

Whether a unit is destined for vehicle duty or for powering a live-stock fence, the basic construction is the same. Inside the casing are two sets of plates, one set positive and one negative, with separators between. The tops of the negative set link to the battery’s negative terminal or post, the positive ones join up to the positive terminal.

Normally at least six plates make up a single cell. When fully charged this produces just over two volts. So a 12V battery has six cells and shows around 12.7V between the terminals when fully charged, but not under load.

Conventional wet cells hold a mix of sulphuric acid and water. The battery stores electrical energy in chemical form on the plates. Charging a battery turns the active material on the positive plates to brown lead dioxide, and the negative plates to grey spongy lead.

When charge, electrical energy is stored in the plate materials and the concentration of sulphuric acid between them is high.

During discharge, electrical energy is released. Chemical change turns both plates’ active material to white-ish lead sulphate and swells them. The concentration and density of the sulphuric acid drops.

Lead-acid batteries split into two broad camps. It’s essential to sort out which is which to decide on application, charging procedure and fault-finding method.

These main types sub-divide again. You’ll need to sort one from another for charging and testing.

• Wet batteries are the conventional sort. Relatively cheap, they use lead-antimony plates; have liquid electrolyte and removable cell caps. Water leaves the electrolyte during charging so cells have to be topped up. Charging is conventional.

• Maintenance-free, sealed, gel or VRLA batteries use lead-calcium plate skeletons to reduce evaporation and gassing. Cell caps may be removable but not easily, as topping-up liquid electrolyte is not routine (1, 2).

Where the electrolyte is a gel there’s no spill risk and the battery can be used (but not charge) in different positions. Gases are vented through one-way valves.

Charge rate must be slow to limit internal temperature and gas production: conventional charges are usually wrong for the job. A ‘magic eye’ charge indicator (3) is another clue.

• Out of season, take the battery off an unused machine. Store cool and charge every couple of weeks.

• Invest in a charger designed to reverse sulphation and, once the batter is fully charged, hold it indefinitely in float or standby mode without over-charging.