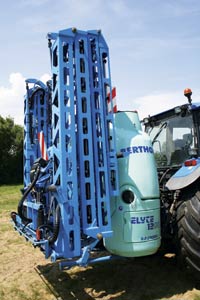 Wide-mounted sprayer booms that fold forward to lie alongside the tractor cab can be a bit of a pain if they obstruct the doors or risk striking the cabin during road travel.

But neither of these drawbacks are a possibility with the latest boom from French manufacturer Berthoud, because it folds into a compact vertical package behind the tank.

“That’s an ideal arrangement to avoid overhanging trees and for operators who don’t want a boom that folds alongside the cab,” points out Martin Shackcloth of Berthoud UK.

After two years’ feedback from users of a pre-production design, the final version of the Ulys boom for Berthoud’s Elyte compact mounted sprayer has several improvements. 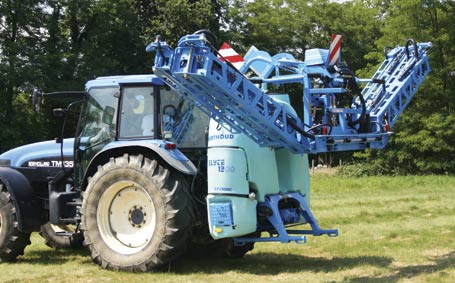 Ulys boom on the Berthoud Elyte mounted sprayer unfolds to operate at different widths or with an asymmetric configuration to suit crops grown in beds.

“The main difference is that it comes with our Axiale boom suspension design, which is recognised as being very effective,” says Mr Shackcloth. “The other significant change for some growers is that all four sizes from 18m to 24m – not just the smallest – can be operated asymmetrically.”


This feature is available on the top specification “ED” version, which has individual electric section-fold control valves. The basic model operates using the tractor spool valves, while the “SEH” version does the same, but using electro-hydraulic operation with a rotary function selector.

“The strong box-section boom structure is common to all versions, as is the way it folds up behind the spray tank,” adds Martin Shackcloth. “Many operators will like the Ulys boom for that feature alone.”

Installing nozzle assemblies within the fabricated box section means there is little chance of spray tips being snagged on foliage when spraying or during transport, even when long air induction tips are fitted.

Like other options for the 1000 to 1600-litre Elyte sprayer, the Ulys boom is carried on a hydraulically-damped pantograph arm that passes through the moulded spray tank. The boom is carried on a central pivot, with coil springs and telescopic dampers regulating movement and a hydraulic cyclinder bringing it level when required.

“This suspension design is renowned for giving a well-controlled ride and for keeping the boom level through fast headland turns,” says Mr Shackcloth.

The same style of suspension, but in bigger scale is used on Berthoud’s first triple-fold boom, the Kondor. This is available now for the Raptor 4200 self-propelled sprayer and will be available in spring 2010 for the two largest Tenor trailed sprayers, the 4300 and 5500.

With four sizes from 32m to 38 metres, the steel Kondor boom will be a shorter-folding alternative to the Ektar 36m to 42m aluminium design; and it will have the more versatile Axiale suspension instead of a plain pendulum arrangement.

The Axiale boom suspension’s two operating modes – selectable from the tractor cab – are “pendulum”, which is reckoned to be best for level but uneven surfaces; and “ground following”, which automatically follows the lie of the land and is, therefore, best for hilly situations.

“Being able to select the style of boom behaviour that best suits different operating situations will be an attraction for large farming operations and contractors alike,” says Martin Shackcloth.