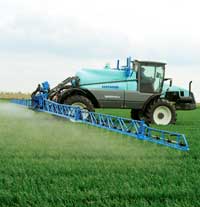 Berthoud has replaced its Boxer self-propelled sprayer with a new model called the Raptor that is bigger, easier to drive and is simpler to maintain.

The new machine comes in two sizes, a 180hp, 3200-litre machine with a 3.9m wheelbase and a bigger 200hp, 4200-litre 4.45m wheelbase version. The jump-in tank capacity compared to the old model is designed to cater for the wider 28m, 30m and 32m booms that UK farmers and contractors are increasingly opting for, says sales manager Martin Shackcloth.

There are several changes compared to the old Boxer unit, he says. For a start, the all-round air suspension is now boosted by a centrally-pivoted rear axle and a new shock-absorber system designed to even out the twists and turns encountered on undulating land.

A new maintenance-free, twin-turbine pump, meanwhile, gives a 550 litre/min fill rate and 9bar working pressure. That means the tank can be filled in four minutes, though the fill rate can be slowed if that is too fast. 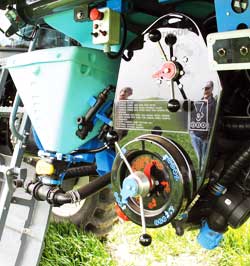 The machine is also easier to maintain than its predecessor, he says, with a swing-out front radiator and easy access to things like the hydraulic oil tank and main valve controls (right). The pipework has been simplified, too, and a bigger sump under the tank makes it easier to get the last of the spray out of the tank.

Fuel tank capacity has jumped from 190 to 360 litres to give longer intervals between refuelling stops. There is a big side storage compartment, plus a hose and brush for washing down the machine.

A bigger cab is fitted too, with a door at the back and hydraulic lift-and-lower steps. Visibility to the front and rear has improved and climate control, a swivelling seat and a Bluetooth radio/CD are standard fit.

Changes to the hydrostatic drive system mean that the Raptor can run at lower revs (and therefore use less fuel) than before. There is a cruise control option that holds a preset forward speed – ideal for roadwork – and a neat hydrostatic lever sensitivity control that allows the speed lever to be pushed forward fully to immediately get the desired forward speed, so the operator can then drive the machine on the foot throttle.

There is joystick control of all main functions, including section controls.

The standard DPtronic system handles the spray management side of things but there is also an optional Gestronic system that records dates, times, chemicals and application rate data. The machine is set up for GPS auto-shutoff and variable rate application, says Mr Shackcloth. Boom choices are from 24m to 42m.