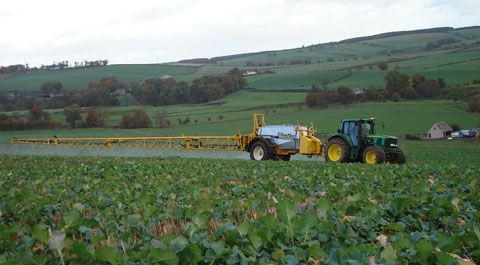 When scientifically developed chemical products for controlling pests and diseases in crops arrived during the 1880s and 1890s they attracted the interest of James Chafer.

Previous attempts to combat blight and other organisms relied on traditional remedies, but scientists were producing new products that were more effective. After James Chafer, the son of a Doncaster, Yorkshire businessman, had qualified as a chemist in 1899 he persuaded his father to supply the new blight control chemicals to local potato growers.

As demand for the chemicals increased, helped by the addition of acid-based herbicide sprays, James Chafer was aware that efficient application improved their effectiveness. Sprayer technology was in its infancy in the early 1900s and to overcome the poor design and often inadequate maintenance of many farm sprayers, James bought some machines to hire to his farmer customers. The sprayers were available by 1907 and they became so popular with customers that the Chafer company began designing and building improved machines to use in the hire fleet. During the 1930s Chafer was expanding its range of chemical products and also building more sprayers including engine-powered machines that offered more even application. More growth came in the 1960s after Chafer expanded into the liquid fertiliser business, creating a big surge in the demand for sprayers for hire and for sale.

In 1967 the company was one of the first to offer stainless steel tanks and in 1968 it built its first self-propelled sprayer based on a David Brown tractor.

Its success in the liquid fertiliser market made Chafer a takeover target and in 1969 ICI bought a 25% shareholding, bringing that to 100% 10 years later. Norsk Hydro bought the company from ICI in 1991 to add to its existing fertiliser business, changing the name to Hydro Chafer. However the sprayer business, which had been moved from Doncaster to Upton in Lincolnshire, was not a core part of the Norsk Hydro interests and in 2000 the business was bought by its management and the name changed to Chafer Machinery.

Horstine-Farmery products contribute about 20% to the company’s total sales with the balance coming from Chafer sprayers and equipment.

Its top selling products are trailed sprayers, which are currently the growth sector in the UK sprayer market. As well as buying more trailed sprayers, customers are also looking for increased capacity, says commercial manager Rob Starkey, and top models in the Chafer range now have tank capacities up to 6000 litres and a 40m maximum boom width.