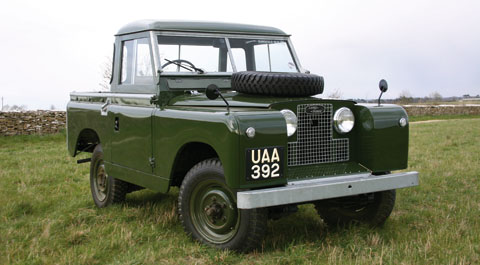 Land Rover is one of Britain’s biggest motor industry successes – and it’s based on ideas originally developed on a Welsh farm.

The farm on Anglesey belonged to Maurice Wilks, the technical director of the Rover car company. Soon after World War 2 ended in 1945 he bought an ex-army American Jeep to use on the farm and it was the Jeep which gave him the idea that Rover should build a go-anywhere vehicle for farmers.

Development work on what became known as the Land Rover project started in about 1946, and the result was quite unlike the comfortable, up-market cars that had made Rover successful. Rover had been building cars in Coventry since 1904, but the company dates back to 1878 when they were making bicycles. The Coventry factory was bombed in the second World War and when the Land Rover project began Rover had recently moved to a new site at Solihull, Birmingham.

On the first experimental Land Rover the driver was in the middle of the front seat with space for a passenger on each side, an arrangement that was soon abandoned. Other design features on the first production models were based on Maurice Wilks’ farming experience and included a load space at the rear, a pto for powering light equipment such as mowers, and the chassis was galvanised to resist corrosion.

Production started in 1948 and the new four-wheel drive vehicle with its impressive off-road and towing characteristics quickly became a worldwide success. Land Rovers were outselling Rover cars within two years and demand continued to grow as the specification improved, with a radio and heater added to the options list in 1951 and diesel power arriving in 1957.

Land Rover’s success as 4WD specialists continued with the launch of the first Range Rover in 1970 followed by the Discovery and Freelander. Meanwhile, the parent company faced increasing difficulties after government policy encouraged Rover and much of the surviving vehicle industry to join the ill-fated Leyland organisation.

This was followed by a series of takeovers which made Rover and Land Rover part of British Aerospace and then BMW. Another change came in 2000 when BMW separated the Land Rover business from Rover and sold it to Ford, which also owned the Jaguar car company. In 2008 Ford arranged to sell both Land Rover and Jaguar to Tata Motors, the leading Indian truck manufacturer.

Land Rover and Jaguar are now linked together as Jaguar Land Rover and their outlook as part of the Tata group looks secure. At a time when financial problems affected major car markets around the world, Jaguar Land Rover production increased by almost 14% to 130,000 vehicles in the first six months of the group’s 2011-2012 financial year, while turnover rose by 30%.

The future also includes a £1.5 billion investment package over the next five years to fund 40 product developments including new British built Jaguar and Land Rover vehicles and engines.