Nineteen ninety-two was the year the Maastricht Treaty was signed, Euro-Disney – now Disneyland Paris – opened, Carlos the Jackal was sentenced to life in prison and Right Said Fred topped the charts with Deeply Dippy.

But more importantly it was the year that John Deere launched its iconic 6000-series tractors. With a clutchless shuttle, four-speed powershift and electronic linkage controls, it was a huge step up from the company’s ever-popular round-cabbed 30-series machines.

It was the 6000 that propelled John Deere to top of the sales charts across Europe and, although different evolutions have occurred over the last 20 years, it is the same basic platform used today that has helped to keep the brand at the top of the tree.


Now though that is set to be challenged. Deere’s German design team have given the 6000-series its biggest shake-up yet. A new engine, gearbox, cab and computer controls make this a pretty radical revamp. A new numbering system should help to make tractor power a bit clearer too. 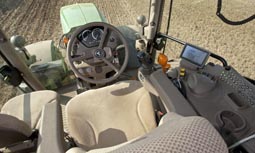 While a ‘6’ up front denotes a tractor from Deere’s middleweight line-up, the following three digits represent that model’s rated power. The 6-R range now swells to include replacements for all the firm’s previous 6030 machines and smaller 7030s – all built at Mannheim in Germany.

We were lucky enough to get out hands on a pre-production 6190-R, effectively the direct replacement for the outgoing 7530. (However the range will now be topped out by a 210hp 6210R.)

With several days to get acquainted with the new tractor we had the chance to tackle a range of different tasks – muckspreading with a 14t Bunning tail-flinger, deep soil loosening with a 9-leg McConnel Shakaerator, stubble work with a 3m Simba DTX disc/tine/press combination and maize carting with a 16t Marston Domex trailer.

• For more on the 6190R test including detail on the new cab layout, in-cab computer and engine, plus a detailed video visit www.powerfarming.co.uk