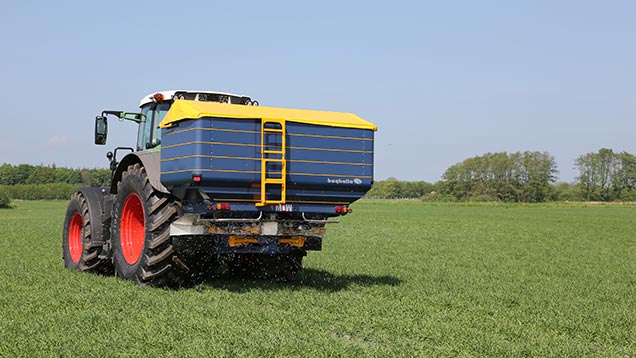 Its Tempo tracker monitors forward speed and links this to the tractor’s position in the field, giving precise opening and closing of the spreader’s shutters on headlands.

When working at higher speed or with higher application rates, the Tempo Tracker automatically closes the shutters earlier when entering the headland and then slightly later as the tractor re-enters the main field.

The reverse happens when working at slower rates or with lower application rates.

Forward speed is monitored 10 times a second, says the company, so the software knows the exact time to open and close the shutters regardless of speed, position and application rate.

“All you need is an external GPS antenna, a standard tablet which you can buy for as little as £150 and the Tempo Tracker app which is available as a free download.”

Two farmers give it a go

Chris Heale, who farms 360ha of arable crops just north of Bristol, was one of the first to try the new software.

“We run a Bogballe M2W spreader with a Patchwork black box system and since adding the Tempo Tracker, evenness of spread at the headland has been noticeably better – it just takes the guesswork out of when to shut off.

“In addition, we save time because the hopper doesn’t need to be refilled because of overspreading at the headland and neither are we left with the hassle of half a tonne of material left in the hopper.”

Tom Mansfield of  Preston Farms, Buckinghamshire, first used the new software on 80ha of phosphate and P+K through his MW2 spreader on a John Deere 6190R with 6S2 swath control.

“The system is really simple to set up and use and works perfectly with the Deere’s greenstar box,” he says.

“I simply map the field then follow the A and B lines around the headland on the screen and the Tempo Tracker software does everything else. The distribution of spread has definitely improved since the Tempo Tracker was added.”