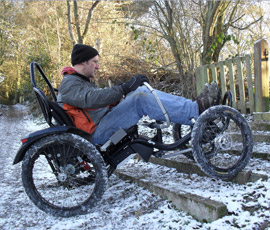 The Boma5 off-road wheelchair has been replaced by a more versatile model called the Boma7.

Both were designed by Chris Swift, who comes from a farming family and did ag engineering at Harper Adams. He’s also paraplegic, so he knows the problems involved in getting around fields and tracks.

The new vehicle from his Molten Rock manufacturing company uses components from the motorsport, wheelchair, mountain bike and golf buggy industries. Power comes from an 800W electric motor powered by a front-mounted battery.

The key difference between the two models, says Mr Swift, is in the range of control systems offered and the way the suspension is configured. The old model used twist-grips and motorbike-type handlebars, so users had to have some strength in both arms.

The new model has the option of being joystick-controlled, so it can be operated by users with more serious disabilities. So there are versions for people with one arm, for instance, and even a model that is controlled by the user’s head.

The suspension now uses single wishbones at the front and a quad-link set-up at the back. Cost of the whole machine is 70kg.

As with the previous version, the low-geared Boma can climb a 50-60° slope and can even be fitted with a diff-lock. It can also climb an 8in step. Range is typically 14 miles on the flat, says Mr Swift, though hills and deep mud reduce that a bit.

Some 20 machines have already been sold, says Mr Swift, and many of the users are farmer’s sons and daughters with spinal injuries, MS or Motor Neurone Disease.