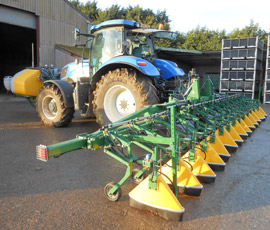 According to the Agricultural Engineers Association, British farm machinery makers exported £903m of farm equipment in the first six months of 2013, compared to imports of £940m in the same period. Overall it gave the UK a trade deficit of £37m.

These figures reflect an increase in exports of some 9% overall. Tractor exports were up 11.8%, mainstream agricultural machinery down 3.4% and engines down by 4.9%. Used tractors and other machinery were up more than a quarter.

Meanwhile imports of farm machinery decreased by 14%, tractor imports fell by 20% and tractor engines were up by 9%. Together that resulted in an overall fall for agricultural engineering exports of some 12.9%.

Rest of the world

The data for the first half of the year showed that some 66% of UK agricultural machinery exports and 53% of tractor exports by value went to the 27 EU countries.

Tractors and agricultural machinery built in the UK were exported to 145 destinations across the world in the first half of 2013. The USA took 19.3% of the total, France took 14.7%, Germany took 9.9% and the Irish Republic took 8.9%.