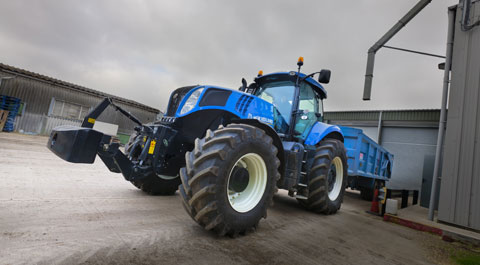 In part 1 of this feature we tackled the basics of tractor selection before evaluating power choice and the costs and benefits of ‘power boost’ options.

In this section, we take a look at the tricky world of transmissions and in part three we’ll tackle suspension options and tyre choice.

What are the options?

With the days of the old crash gearbox long since gone, tractor buyers now have an enviable choice of transmission options.

There are different configuration and control permutations to suit different applications – from the simple 8×8 synchro ‘box of the Case IH Farmall A yard tractor to the fully-automated stepless drive of a Fendt Vario.

For a tractor that performs most of its work in the yard, a synchro gearbox with relatively few ratios will be adequate, just as long as it doesn’t demand frequent shifting between ranges to access the required working speeds.

The availability of an economy power take-off ratio could be a key consideration for tractors handling static pto-drive applications such as running a slurry stirrer or mixing rations in a diet feeder, or powering pto-driven implements like fertiliser broadcasters with low power requirement.

The 540E and 1000E setting – also identified as 750rpm in some cases – enables the required shaft speed to be attained at a lower, quieter and typically 18% more economical engine speed.

A tractor without a separate forward-reverse shuttle is a rarity these days and synchro shuttles are becoming less common as drivers have become used to the easy driving characteristics and productivity gains of a power shuttle, especially for loader work.

On a number of smaller tractors where there is a choice, a power shuttle also brings with it the durability and added wear-resistance of a wet clutch – often for the pto at the same time.

Buyers prepared to forego these advantages in the interests of saving cash have a diminishing number of options.

But the new Case IH Farmall A, New Holland T5 and MF 3600 Series tractors offer a choice, as does the Claas Elios 200.

But the operator also loses the benefits of a modulated hydraulic pto clutch on the ARGO machines.

The difference in list price between a Zetor Proxima with synchro shuttle and the ‘Plus’ version with additional improvements is £2298.

And by accepting a number of spec losses in addition to a power shuttle, farmers can purchase a 100hp or 110hp Landini Powermondial for more than £6000 less than the full-spec version.

Uniquely among six-cylinder tractors, the Landini Landpower no longer has a power shuttle option since most buyers opt for the simpler, cheaper spec.

Although savings can often be made by opting for a 30kph transmission where available, few operators will welcome this travel speed restriction except on a tractor that spends most of its time in the yard or close fields.

Conversely, going to 50kph incurs significant extra cost because it requires fixed rims and axle suspension, and will often be packaged with air braking and tyres with a sufficiently high speed rating.

Add the higher-speed gearing to the six-cylinder MF 7600 Dyna-6 Efficient tractors costs £1992 – but that is because this version already has a suspended front axle; upgrading the lower-spec Essential model costs almost £5600.

The pay-off for this added investment comes in quicker journeys for tractors that spend a lot of their time on the road or reduced fuel consumption from using the high gearing to run at 40kph (the legal limit, remember) with fewer revs on the clock.

The tractor has a 50kph top gear but electronic engine management limits the tractor to 40kph, at which the motor will be turning over at perhaps 1850rpm rather than the 2200rpm rated speed.

In top gear, power goes from the engine via the power take-off drive and is picked up by the rear axle through a set of transfer gears. Comparative tests with other tractors have shown up to 15% fuel saving.

Trials by the German organisation DLG comparing John Deere’s AutoQuad Plus with and without EcoShift found the latter cut fuel consumption by up to 20% on flat terrain, falling to 5% in hilly areas where the engine would spend more time at higher power ratings attempting to maintain speed.

Upgrading a John Deere 6R six-cylinder tractor to this transmission from the regular AutoQuad adds almost £1000 to the list price and it’s a £740 to £1150 option on Case IH Puma models.

But it’s a standard feature of the Deutz-Fahr Agrotron M, McCormick X70 and Landini 7-series tractors.

Although auto shifting is largely regarded as a ‘comfort’ feature that allows the operator to keep his hands firmly on the wheel when travelling at speed on the road, the more sophisticated versions that also operate in the field can make a useful contribution to efficiency and fuel consumption.

Some operators may consider this an affront to their skills but they should embrace it when trials with the Massey Ferguson AutoDrive system have shown a 10% improvement in productivity and up to 12% reduction in fuel consumption over manual shifting.

The reason is that operators are inclined to find a comfortable gear and stick with it rather than keep shifting; an auto-shift gearbox is always prepared to go to the best ratio.

Like similar system, MF’s AutoDrive allows the operator to set the engine speed for upshifts (in this case between 1600 and 2200rpm) and so tailor the set up for individual jobs and operating conditions.

It’s a £645 option on base-spec models in the MF 6400 Dyna-6 but standard on better-equipped models and also on all versions of the MF 7600 Dyna-4 and Dyna-6 tractors being introduced to replace them.

The similar Hexactiv system comes as part of the CEBIS package on Claas Arion 600 series tractors, while New Holland lists auto shifting for the Electro Command 16×16 transmission in T6 tractors at £666 and John Deere asks £976 for the AutoQuad version of its 20×20 transmission on all 6R models.

While a creep gearbox will typically add £1100 to £1300 to the list price of a mid-range tractor, ultra-low ratios for specialist work come as standard with a stepless transmission – along with a host of other features.

Operators can choose from a selection of control strategies to suit different tasks that alter the transmission ratio and engine speed to deliver maximum power for draft work, a consistent pto speed or best economy as appropriate.

CVT drives are said to be especially efficient for road transport because of the low engine speeds that can be used but productivity and work quality gains in the field also make them worth considering.

Inevitably, though, such technology comes at a price: Although Valtra only charges £1100 for the Direct model over a Versu to equivalent specification, the premium charged for MF, Deere and New Holland stepless tractors is around the £6000 to £7000 mark, while Claas puts a £13,000 premium on the C-Matic version of the Axion 800. 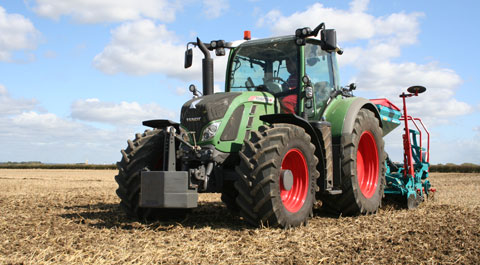 Stepless transmissions in tractors like this Fendt 724 Vario offer efficiency gains across a number of applications but the technology comes at a price.