The treeless, flat plains of the North American prairies mean you can get a good look at a province the size of France just by standing on a couple of telephone books.

Aside from mining, wheat and oilseed rape are the area’s primary earners and average farm sizes are close to 2,500ha.

Naturally, that demands big kit and high-horsepower, and there’s no better place in Canada to see both of those things in the flesh than the annual Farm Progress Show.

It takes place every June in Regina – a city flanked by Calgary many miles to the west and Winnipeg eastwards – and is a must-visit for anyone serious about broad-acre farming. 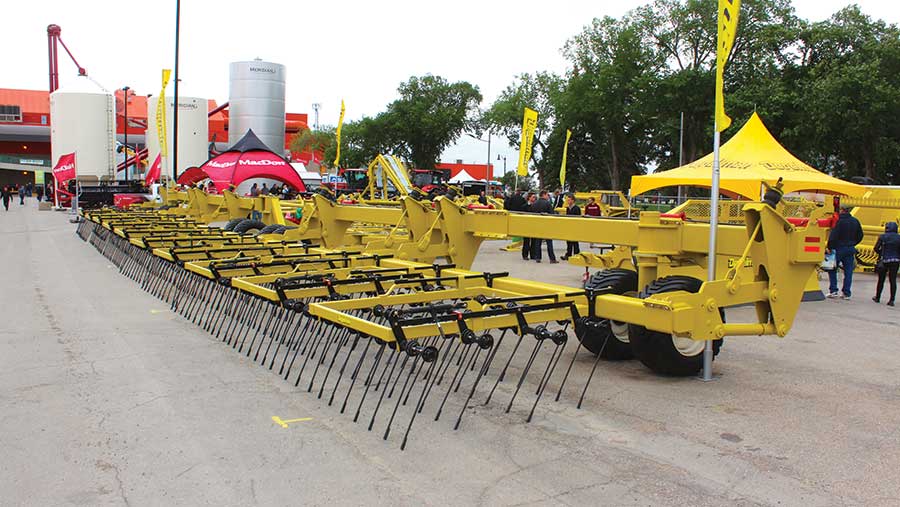 A good chunk of that meat is in the 305mmx405mm main beam, which is designed to cope with the steel-bending strain at the outermost tips while being dragged at 10mph by a 600hp crawler.

The unusual thing about Degelman’s design is the four rows of extra-long 76cm tines that provide greater vibration to disturb straw and soil.

Carbide tips will make them last up to five times longer than usual and they apparently have enough strength to work down to 4in deep.

According to the company, that makes it a bona fide cultivation tool and it should be more than capable of pulling out sprayer ruts in the tramlines.

The working angle of the tines is adjusted by a row of turnbuckles – the company suggests 30deg offers a balance between soil movement and power demand, but they can be set at anything from 5deg to 65deg.

It’s no surprise horsepower requirements are on the high side and the 120ft version has been known to stall a Case Quadtrac 620. 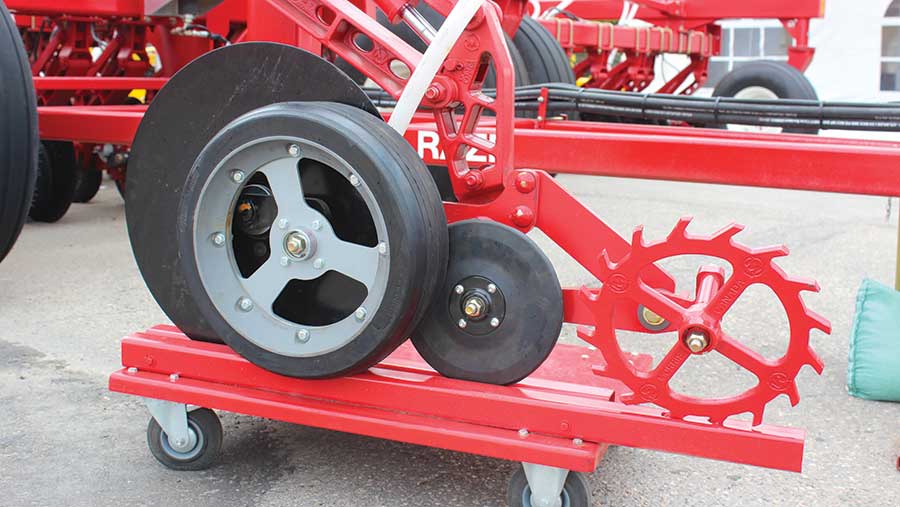 Morris has designed a new coulter set-up for its Razr disc drill the company reckons will make it a master in bone-dry soils and wet clay conditions susceptible to overpacking.

A set of 560mm disc are spread at 190mm or 250mm spacings to open the slots and they’re flanked by a knife that drops the seed into the trough.

Behind that comes a 250mm rubber firming wheel that runs at the same depth as the opening disc and applies moderate downward pressure on the seed.

This helps push it to the base of the furrow, which reduces seed bounce, provides better seed-to-soil contact and should make for a more uniform sowing depth. 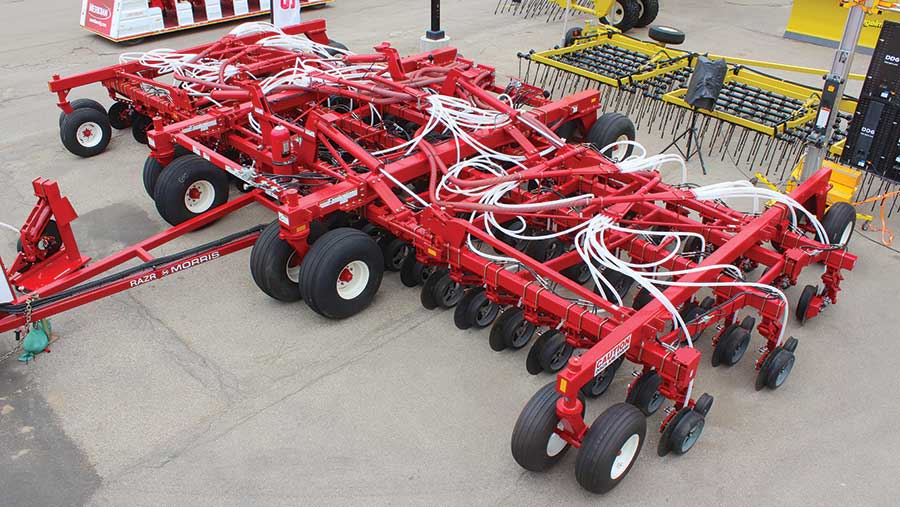 The business end is at the back, where a new cast steel, spoked closing wheel sits at an angle to grab soil from the furrow side wall and throw it loosely over the seed to give it a better chance of getting established.

Models extend up to the 18m wide, 23.5t version and, because there are three rows of coulters (the first two drop seed, while the back set lay fertiliser down) the company reckons it’ll need at least 15hp/m. 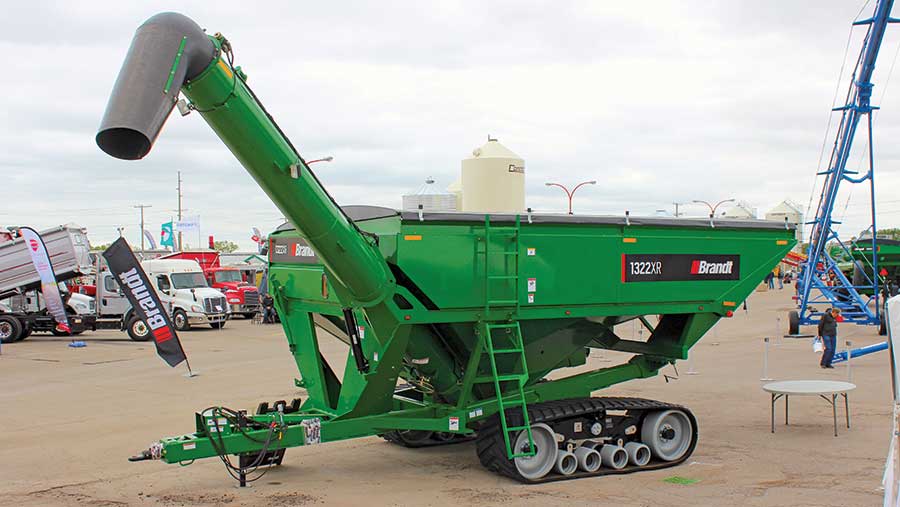 Chaser bins are big business in Canada, with about 1,000 units shifted every year.

For those looking for the least budget-sapping option, slope-sided gravity-fed set-ups such as Brandt’s 1322XR – the biggest model in the range – are the ones to go for. It has just one auger, which lops about £8,000 off the asking price.

Capacity of the Regina-built bin is 46cu m and it uses a 510mm auger to ditch a full load at a rate of 22cu m/min, using a rotating discharge spout to make sure everything lands in the trailer while on the move.

Camso can supply 915mm x 3.45m tracks, which are able to reduce ground pressure from 66psi on the wheeled walking-beam arrangement to just 13psi when running on the rubber belts. However, only 15% of buyers take up that option, according to Brandt. 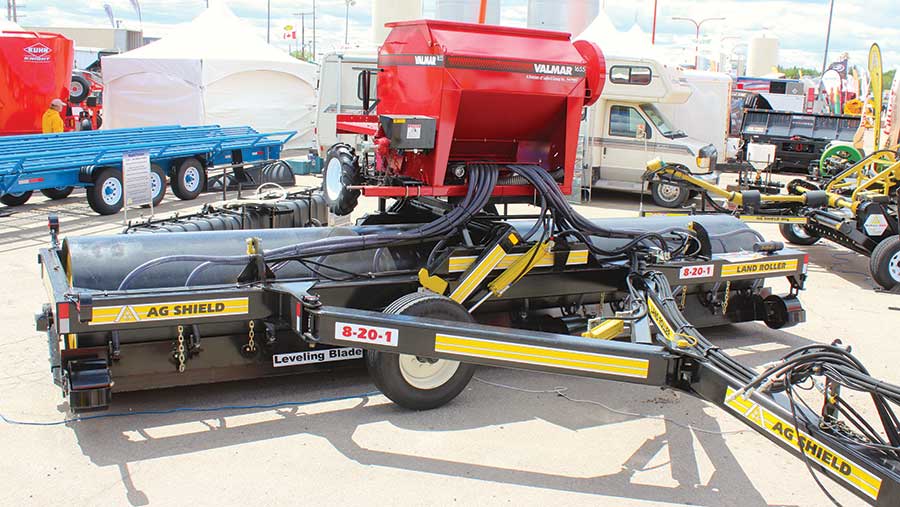 Ag Shield is waging war on moles with its heavy roller and levelling board combination, which can be paired-up with a hopper kit for overseeding work.

Rollers are available in rigid form 3.5m models up to triple-fold 18m set-ups and come with a front levelling blade to wipe out any lumps that could wreak havoc with mower blades and baler belts.

Steel gauge wheels set the height of the levelling board, which Ag Shield suggests should be anything from 20mm to 50mm above the ground.

The version at the show was fitted with Salford’s Valmar hopper, though any kit can be bolted on top. It blows seed through 560mm-spaced holes in the levelling board and against the roller, which disperses them fairly evenly across the ground.

The 6m, rigid model takes 100hp to pull, but monster three-section kits will need closer to 300hp to get near the recommended 7mph speed. 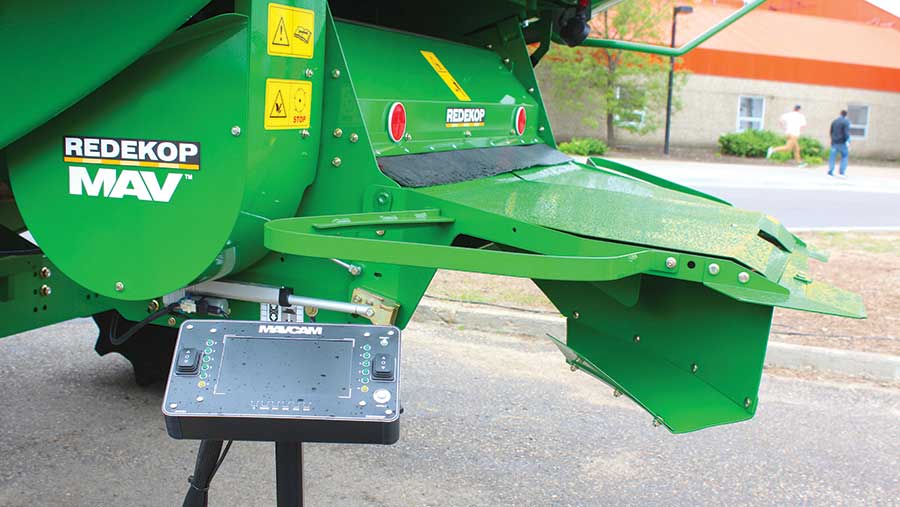 Redekop’s trash spreading unit is becoming the must-have accessory for anyone running a 35ft-plus combine header, and the company recently agreed a deal with Case that will see the choppers available as a factory-fit option on new machines.

Fresh off the back of that, the maker has developed a prototype camera kit to help spread material more accurately by taking into account wind speeds and slopes.

It uses a camera mounted on the back of the combine to relay footage to an in-cab screen so that the driver can see exactly how and where the trash is being distributed.

Controls offer five-stage adjustment of each side of the retrofitted tailboard, allowing the driver to point one side downwards to negate the effect of any crosswind.

At the end of a bout there’s a reverse function, which puts the opposite side down for the return journey.

The kit includes a wiring harness, actuators and brackets to mount to the combine’s tailboard (which includes a set of carbide-coated, self-sharpening blades), as well as the in-cab screen. 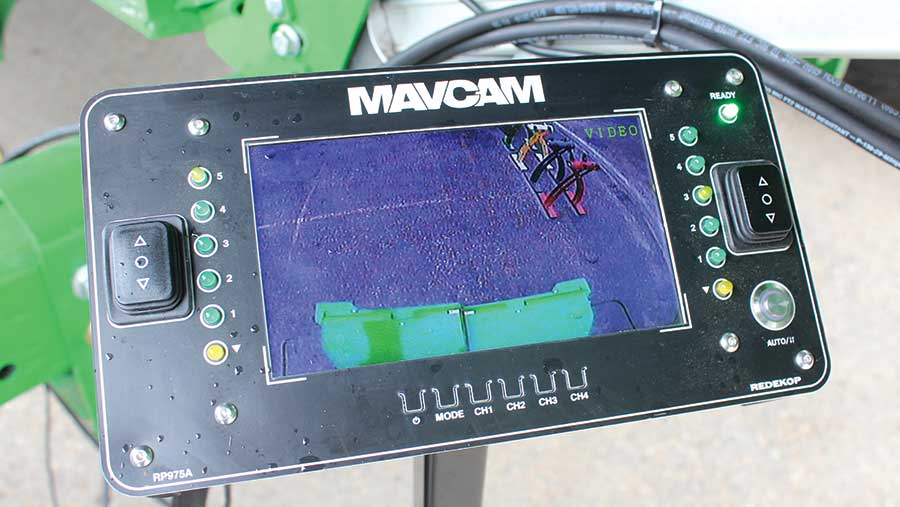 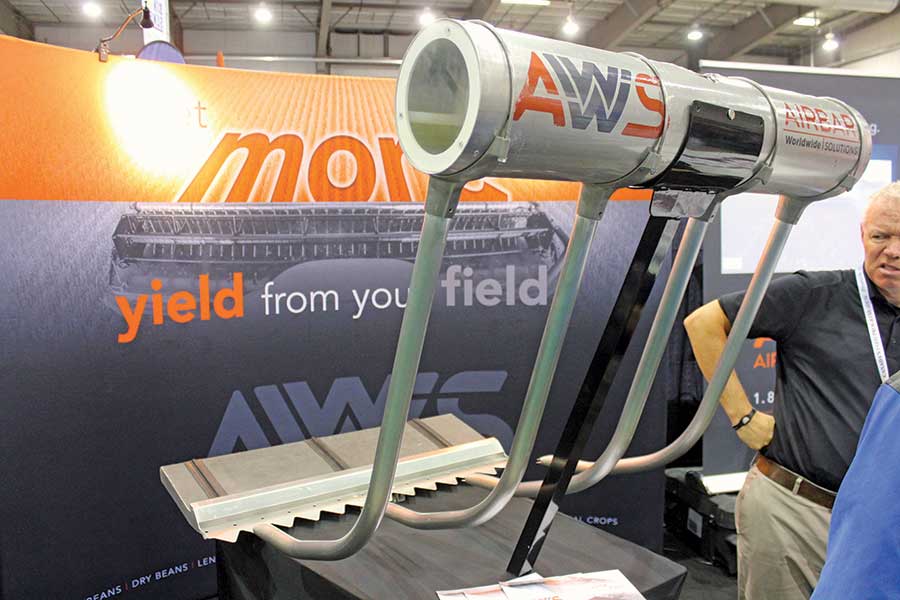 AWS was showing off a neat piping system that uses air to encourage crops to flow over the cutterbar and reduce shatter loss while harvesting pulses.

There’s no need to tweak the header, either – the retrofit kit slots straight on and uses an electric actuator to adjust the position of the nozzles to suit the crop and conditions.

The company reckons attaching the kit can increase yields by up to 45kg/ha and the combine can also travel quicker because the crop feeds in more smoothly. 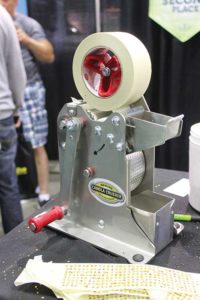 The Canola Crusher is the brainchild of Manitoba farmer Gerry Devloo and uses a crank to crunch seeds and distribute them neatly on sticky tape ready for evaluation.

It speeds up the manual method of counting and crushing oilseed rape seeds to check for green grains by producing a sample of 250 in a matter of second.

Seed is gravity-fed from a small hopper to the rotating drum wheel, which carries 250 seed pockets.

The tape is pressed against the pickup wheel to make sure of good contact with each seed, which is then carried through the crushing rollers.

After four rotations of the crank the 250 seeds are ready for inspection and the remaining grain can be dropped out of the spring-loaded hopper. 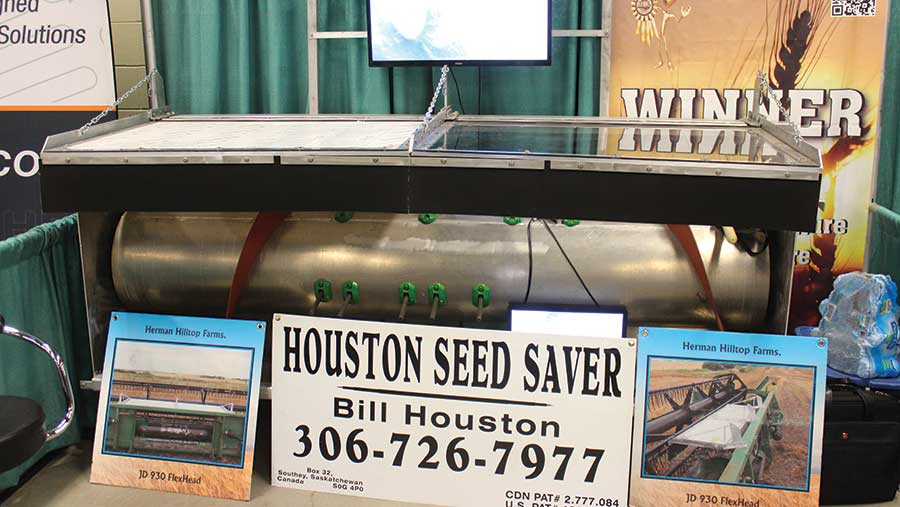 One of the simpler Canadian-made inventions came from Bill Houston with his one-size-fits-all floating cover to sit on top of the combine header.

It uses a lightweight 2.4m-wide, 80cm deep aluminium frame with stainless steel fixings, which dangles over the auger tines to stop material being thrown on top of the feeder housing, while a strip of baler belt hangs across the front to stop grain getting flung forwards.

High-carbon plastic screens – the same type as used for aeroplane windscreens – mean it doesn’t affect the view to the header, either.

According to Mr Houston, the Seed Saver is a particularly handy ally when picking up windrowed oilseed rape (the most popular way of harvesting rape crops in Canada) where the seeds get scattered everywhere and losses are high.

In fact, during his trials with a John Deere 9770 combine he found he was catching 2kg/ha that was previously getting thrown over the back of the table.

It also works as a useful dust suppressant, particularly when harvesting late into the evening when damp air causes the dust to cling to the windows. 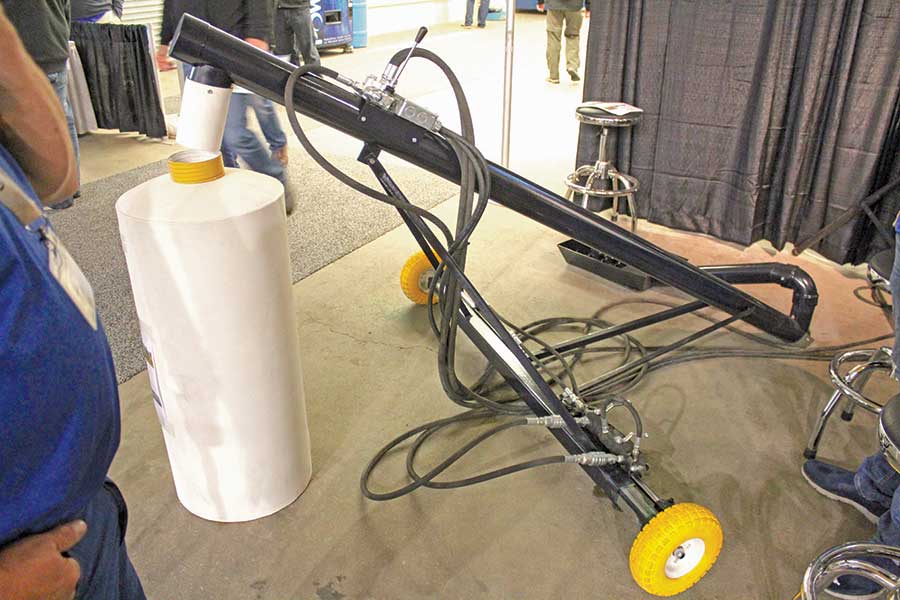 Canadian farmer Gord Blechinger has designed a natty side-shift system for grain augers to help line the spout up with the top of the grain bin.

It uses either a single or pair of tractor-powered hydraulic rams fitted to the axle to shift the rig left of right.

The system can be retrofitted to old augers of any size and the company is also hoping to get the kits factory fitted from new.

The maximum distance of movement depends on the cylinder stroke of the hydraulic ram. As a rough guide, a 24m auger will offer 200mm adjustment at the axle, which equates to 400mm at the head. 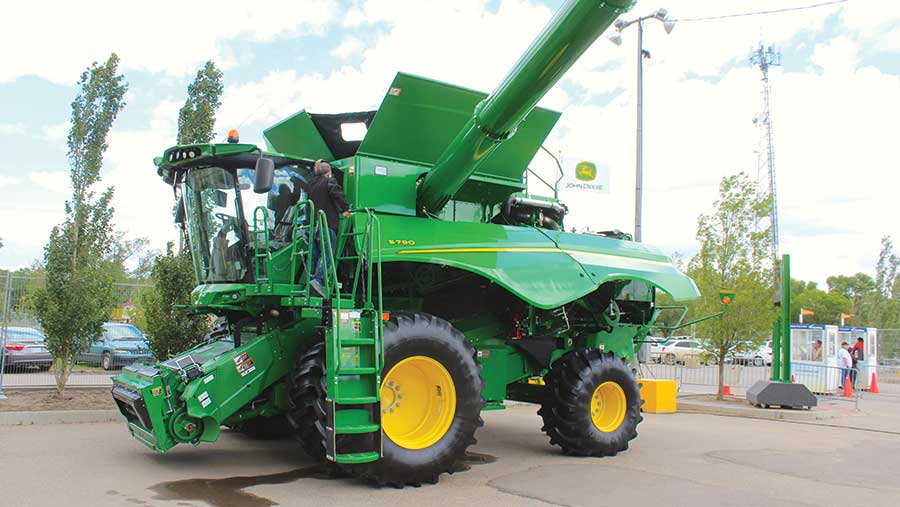 The four-model range includes the S760, S770, S780 and S790, and the company claims to have taken the 2012-launched S6 models to the next level by offering automatic on-the-go adjustments.

The biggest part of that is Deere’s Combine Advisor kit, which includes a batch of cameras to help the operator keep an eye on the tailings and clean grain elevators through the display.

In the cab, there are the same CommandCentre controls as Deere’s biggest tractors and self-propelled sprayers. That includes a multi-function control lever, customisable buttons and auto steer settings.

Other appealing extras include a ventilated, swivelling seat and extra grain tank mirrors.

The machines should be available next year. 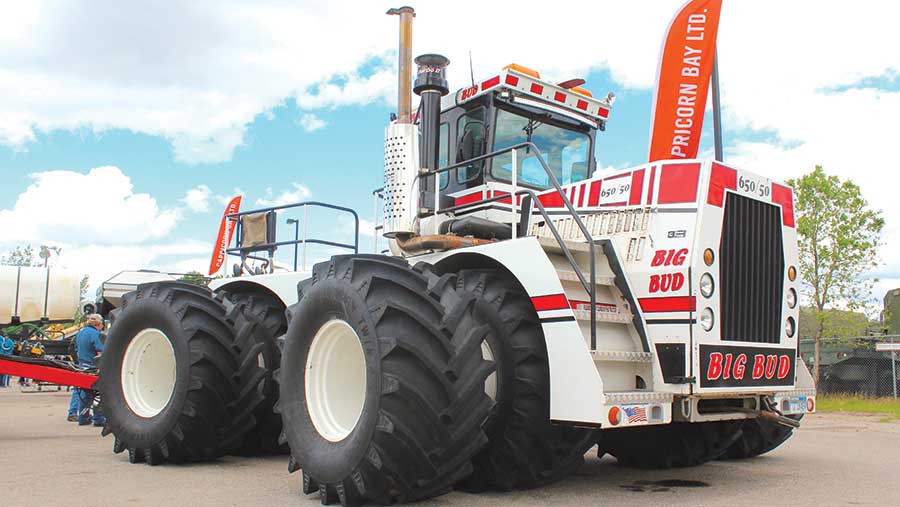 No North American show is complete without an appearance from the most famous face in farm machinery – Big Bud.

The custom-made 747 was originally designed to deliver 760hp from its 16-cylinder Detroit Diesel engine, but has been gradually upgraded to its current 1,100hp rating.

Everything comes super-sized, so it weighs over 45t and provides a maximum hydraulic flow of 246-litres/min.

After a brief spell in Florida it returned to Montana, where it has remained ever since. 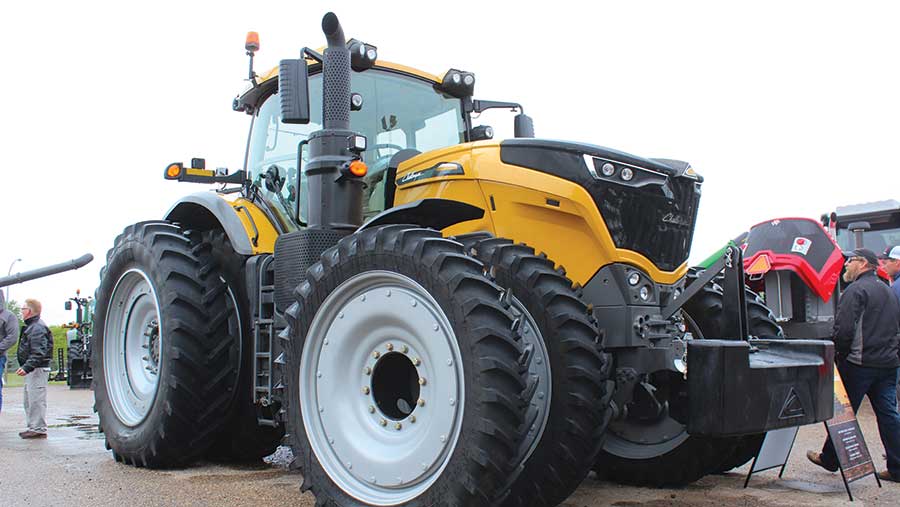 Fendt’s 1000 series dressed in Challenger colours has been attracting growing interest across North America, though it’s still miles from making a dent in Deere’s market domination.

Agco reckons farmers are increasingly warming to the idea of saving a few quid on fuel and labour by trimming down from two tractors to one – and that’s where the 1038 comes in.