Alongside the dozens of drill and cultivation machinery makers exhibiting at the Cereals event were a few more unusual items.

These included John Deere’s new weight block that fits to the tractor’s chassis rails to provide near-50/50 weight distribution and a monster 1,400mm-wide Goodyear tyre designed to replace dual wheels.

Those struggling to get enough traction with their John Deere 7R now have the option of a new quick-fit underbelly weight.

The EZ Ballast system is built by long-term John Deere partner Laforge and uses a hydraulic arm to lift the unit on and off.

All the operator has to do is drive over the weight until the hydraulic arm locks into it. Flicking a switch then lifts the ballast up into the chassis, where hydraulic locking pins secure it in place.

According to John Deere and Laforge, the EZ Ballast system adds 1,700kg bang in the centre of the tractor, so weight distribution is equal between all wheels. And because it tucks itself up inside the chassis, ground clearance is only reduced by 2.5cm.

The 370kg lifting frame itself bolts to the tractor’s chassis rails and remains a semi-permanent fixture. Thankfully it doesn’t tie up any of the tractors spools.

EZ Ballast is being distributed by Risborough Agricultural Services and has a fairly hefty list price of £10,850.

Dammann is well known for its monster self-propelled sprayers, but it makes some pretty hefty trailed ones too.

The biggest tractor-pulled machine on offer has a colossal 14,000-litre tank, but so far the four models sold in the UK have ranged from 3,000 to 8,000 litres. 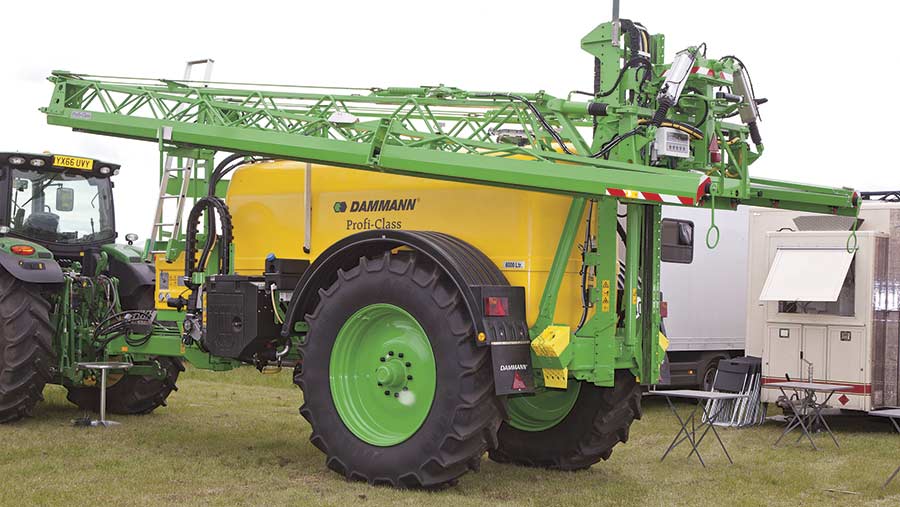 At Cereals, importer Chantry Dammann was showing off one of the maker’s latest Profi-Class S machines with a fibreglass tank rated to hold 6,000 litres. However, according to Dammann it can hold as much as 6,800 litres.

This model comes with a single steering axle shod with twin 520 85 R42 tyres and weighs in at about 5.5t unladen. It’s also fitted with DCD pneumatic boom height adjustment and has 10-section control, too.

Boom sizes range from 24m to 39m and there is the option of twin-fold or triple-fold versions.

The 6,000-litre machine on show had a list price of £97,000, including automatic boom height control.

Goodyear was showing off what it claims is the largest agricultural tyre in the world.

Its main role is to replace dual wheels on large articulated machines and apparently it has a few sets working in Europe.

However, the fact that a pair of these tyres alone adds up to almost 3m means they’re not going to be venturing onto UK roads any time soon.

The unique sizing of the tyre means a specific rim has to be purchased too, so the total outlay for one corner adds up to about £9,500, putting a full set at £38,000.

Strip-tillage specialist Mzuri has decided to dip its toe in the hedgecutter market with a revolutionary head design aimed at fewer passes and more output. 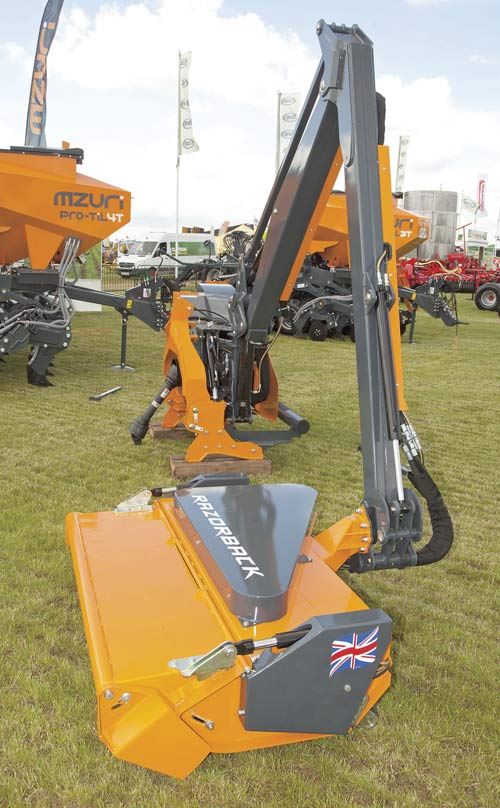 The new head does away with the conventional hedgecutter rotor and instead employs six hardened steel blades in an arrangement more commonly seen on grass mowers. A further six blades sit above these to munch down any longer sticks.

Blades are driven by a triple-V belt and there is a hydraulic roller and front hood that can be adjusted to keep debris away from the road.

As there is no rotor whirling around that adds weight and saps tractor power, the 1.5m-wide head requires just 120hp, which is about the same as a 1.2m standard flail head, the company claims.

The hedgecutter frame attaches to the tractor via a three-point-linkage and stabiliser bar, while the body of the machine and arm rest on a separate pivot point with a sliding frame, which hydraulically adjusts when the auto level co-pilot is pressed.

If the tractor’s wheel drops in a hole, the independent ram receives an electric signal from a gyroscope and counteracts the tractor movement to stop the head gnawing a chunk out of the hedge.

Mzuri is building one machine with a 5.5m reach along with an electric joystick control and a built-in oil cooler.

DC Engineering of Swaffham, Norfolk, was showing of the first fruits of a tie-up with Belgian-built Record trailers after recently taking on the import job. 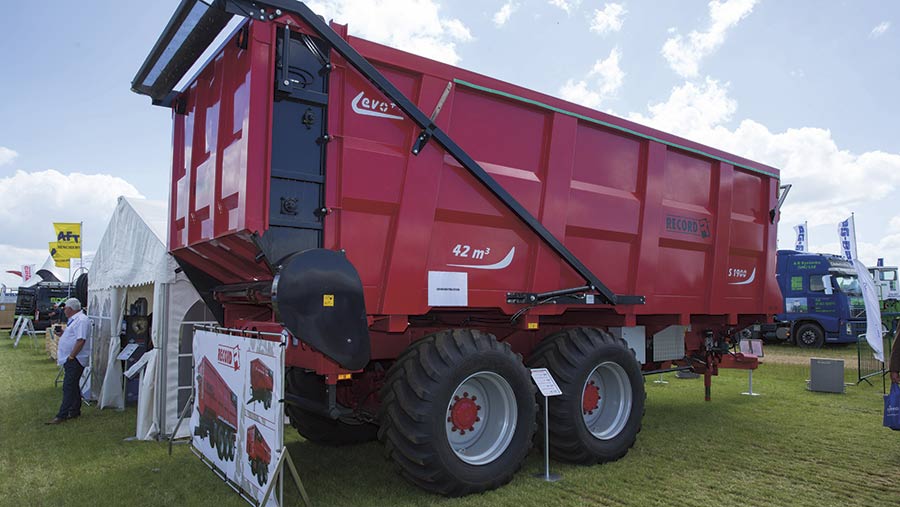 At Cereals it had the monster S1900, which has a 42cu m capacity, walking floor and rear-discharge rotors. Some big 710/50/30.5 boots should help keep it stable and there’s the option of driven MAN axles to get out of particularly sticky situations.