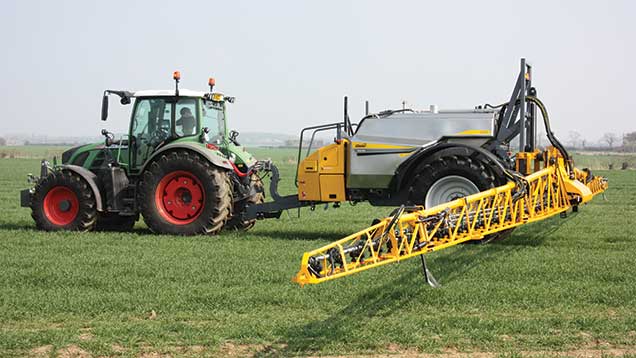 The UK trailed sprayer market may be a competitive one but Gainsborough firm Chafer reckons its latest models will keep the Lincolnshire maker ahead of the pack, says David Cousins.

UK farmers and contractors have always been pretty keen on their trailed sprayers. They’re quick to hitch up, give high workrates and cost a lot less than the average self-propelled model.

But with just 250-300 machines sold in the UK in a typical year, it’s a hard-fought sector. There’s also increasing competition from big players like Deere, Amazone and Horsch-Leeb, not to mention UK makers like Knight, Hardi, Chafer and Landquip, so no-one can rest on their laurels.

And the news that Agco Challenger is to start selling trailed sprayers in the UK will make the sector even more hard-fought.

So what’s Chafer’s answer to this increasing competition? Bigger booms, more throughput and a lot more high-tech equipment on its two models, the smaller Guardian model and bigger Sentry. There’s also now an e-spec level for those who want all the bells and whistles.

Booms of 24m may have been the norm for sprayers for many years, but better boom suspensions and quicker-responding auto-levelling boom systems are making wider widths a viable option for many farmers.

Horstine (which is part of Chafer) has also announced that it will be showing a 24m Cascade applicator at Cereals 2015 for Avadex granules as part of the ongoing fight against blackgrass.

Smaller applicators (like the company’s existing TMA4) have been on the market for some time but Horstine reckons that there’s a growing need for a bigger machine. So the Cascade will come in widths up to 24m and have a larger 1,500 litre hopper.

Four sections are fitted, each with hydraulically-driven metering, and each outlet is fed by its own individual metering rotor. It’s a pneumatic system, with distribution outlets spaced at 1m intervals and an RDS controller to maintain accuracy.

To achieve this, new boom designs and centre frames have been used to give lower transport heights without increasing the time it takes to fold and unfold the booms.

Top of the range H-series booms get a new centre frame with an air suspension system. This uses adjustable air springs for both the tilt and bounce suspension to isolate the boom from shocks transmitted through the chassis.

Other options include up to 20 sections for GPS auto shutoff, LED lighting to illuminate the spray pattern, individual nozzle control and Chafer’s Contour system for keeping the boom parallel to the ground.

Buyers of Guardian models get the option of 3,000, 3,500 and 4,000-litre tanks, while Sentry users can choose between 4,000, 5,000 and 6,000 litres. The stainless-steel tanks have been reshaped, too, so that more of the weight sits lower down in the tank and the overall height has been lowered.

A 65kph axle has also been added to the options list to help keep up with increasing road speeds.

A new, bigger, 45-litre induction hopper that can be stowed out of the way has also been fitted and twin-wash optics are fitted as standard to ease washouts.

There’s also a new high-spec electronic option called ePlumbing that uses a manifold system of valves to control the flow of liquid around the sprayer more accurately. This includes the company’s eClean software for carrying out automated dilution and rinsing of the sprayer.

A natty external screen, with a sliding cover, also comes with the ePlumbing package and an Isobus system allows you to hook up the sprayer with the tractor’s existing screen.