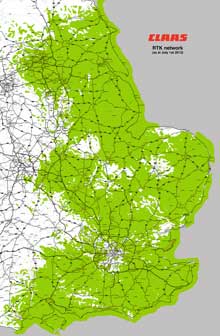 Claas UK says it is expanding its RTK (ultra-accurate GPS) signal network and that it will soon have coverage over 60% of England’s arable area.

As well as expanding its base station network, it is also increasing the signal strength.

Currently, the Claas RTK network covers most of Lincolnshire and the eastern counties using masts erected on dealers’ or farmers’ buildings.

However, it has now struck an agreement that will let it mount base stations on existing structures like TV and wireless masts.

At the same time, it says it is launching a new base station that will provide an open signal that can be accessed by any RTK receiver using CMR+.

“The one great advantage of being able to use structures such at TV masts is their height,” explains Claas product specialist, Edward Miller. “By being able to mount the base station high up the mast, this provides far greater coverage.

“As part of this network expansion, we are also substantially increasing the signal strength from the current 25 watts up to 2kW. This will be a big benefit as it will provide a stronger, more reliable signal.”

When complete, it will give coverage over 60% of England’s arable area, from Yorkshire down to the south coast and west to Swindon. Ultimately, it says, the aim is to provide coverage throughout the whole UK.

To access the new signal, the annual licence fee is £450 a machine and for those using non-CLAAS RTK steering equipment there is a one-off charge of about £500 to convert their equipment to receive the signal.