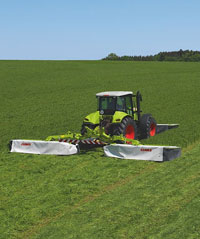 Claas has launched a number of new additions to its Disco mower range, including what is to become the widest triple on the market – the 9.1m 9300 C Contour – as well as a new range of centre-swivel disc models.

To match the capacity of the Jaguar foragers, says Claas, there are four new triple mowers, based on the existing Claas Disco Contour range.

Both C Contour models can be used as a single front-mounted unit on a reverse drive unit or in a front and rear “butterfly” format, whereas the Contour models use a straight ‘butterfly’ mounting, requiring low hp requirements of between 150hp and 170hp.

All four models use centrally-pivoting 3.4m or 3m mowing units and use the company’s P-CUT cutterbar.

The Disco 3000 TC and 3500 TC centre-swivel trailed mowers, with working widths of 3m and 3.4m, use two single-acting hydraulic rams fitted either side of the drawbar,. which allows the mower to swivel from side to side.

What this means is that the mower can be set up to the track width of the tractor. Where each ram connects to the mower, operators can adjust ram extension length, altering the swivel angle of the mower, something not possible with a single-acting ram.