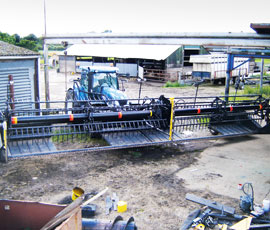 Swathing rape could be set for a bit of a comeback, thanks to an Essex contractor’s two-in-one swathing system. David Cousins explains.

Thirty years ago, the usual way to harvest rape was to cut it with a self-propelled, 15ft swather and leave it in rows for several days to dry out. The combine, which was typically about 14/15ft wide, too, would then come in and pick it up with a regular header.

That worked fine for many years, but as combine headers grew in width to more than 24ft, the system didn’t work as well. Wider swathers were available, but no-one wanted a huge swath of rape that would take ages to dry out. And most combines, though wider than before, still weren’t wide enough to pick up two swaths at a time.

Instead, most farmers went down the direct-cut route, putting on a desiccant such as glyphosate and then waiting for the crop to die off enough to direct cut it with a combine. However, for many farmers, that wait (which can be up to three weeks) can be pretty frustrating, particularly if the wheat is ready to harvest.

This somewhat unsatisfactory situation prompted Braintree-based contractor Duncan Frasier, from Frasier Farm Services, to wonder if there was a way in which the once-widespread practice of swathing could be updated to suit modern combine header widths.

Mr Frasier’s idea was to take an 11m (36ft) McDon swather, which normally drops one big swath in the centre, and convert it to deposit two smaller swaths. To do that involved rearranging the transverse rubber belts so that, essentially, it worked like two 5.5m (18ft) units.

It retains the McDon suspension system and wheels at either end that give good ground-following characteristics. Meanwhile, an extra central side-knife helps part the swaths.

The knife and draper belts are powered from the tractor’s pto, while the reel and side-knives have hydraulic motors on them.

Potential work rates look impressive and Mr Frasier reckons he will be able to swath 140ha (350 acres) in a long day at a forward speed of 8kph. Headlands will require just two passes, he says, but there’s enough space between the rows for the swather to turn with minimal running on the swath.

There are other benefits, too, he reckons. For a start, there’s no need to send in a sprayer to apply the glyphosate or other desiccant. Also, the knife on the McDon cuts low (typically 5in) so there are none of those knee-high rape stubbles that combine drivers are forced to leave and which tend to block up the following cultivator.

Mr Frasier says two local farmers have already booked him to cut 500 acres of rape with his new machine and he plans to take the swather to Scotland as the rape-cutting season progresses. But he’s looking for other farmers to try the system, too.