Clean Seed, a Canadian outfit with a penchant for meticulous drilling accuracy, recently unveiled its maiden seeder that promises never-seen-before levels of accuracy from a high-output cereal planter.

And its vital stats make for some eyebrow-lifting reading.

In return for your rather chunky cheque you get some of the most sophisticated drilling technology ever imagined, including turn compensation, overlap protection, individual point shut-off and a variable application rate at every opener. 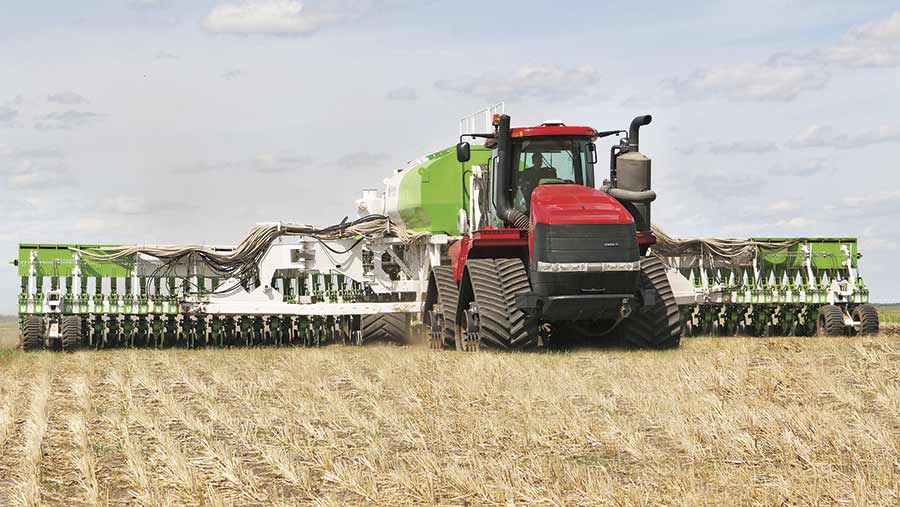 We’ll run through the inner workings of the machine later on, but it relies heavily on six metering units that sit on top of each row unit so that individual legs can sow a different ration of seeds and fertilisers at the same time.

In fact, the agronomic permutations are practically limitless and it gives farmers and agronomists the license to be as creative as they like with their inputs, tweaking drilling rates and application maps in almost infinite detail.

The 17 different patents serve as a stark illustration of the CX-6’s novelty value and, remarkably, it has been transformed from drawing board sketches to the real deal in just five years.

Construction of the Smart Seeder started in 2012, although the opener system predates the drill by a couple of decades (see ‘Where did it start?’, below).

Its design has been heavily shaped by the creative minds of a batch of Canadian farmers keen to push the boundaries of agronomics but hobbled by the inconsistent seed distribution and limited adjustments offered by regular air seeders.

The way pneumatic machines meter seed and fire it through an air stream is far quicker than the old-but-reliable box drill, but air also causes seed to bunch, surge and bounce in the trench.

No good, then, if you wish to sow plants with Alan-Titchmarsh-like precision and mix exotic-sounding cocktails of fertilisers to go with them.

So, with an assembled team of farmers and designers, the company decided to embark on its own drill-building mission.

To fund the project, Clean Seed gathered a healthy $1m investment from a group of 10 progressive farmers in Canada and by 2013 the first fruits of the development – the six-product digital metering system and triple-shot opener – were displayed at Canada’s Farm Progress Show.

Another financing push filled the coffers enough to continue development and a full prototype drill was unveiled in 2014.

The first commercial unit then debuted last year and several production machines have been working flat-out across Canada through last spring. 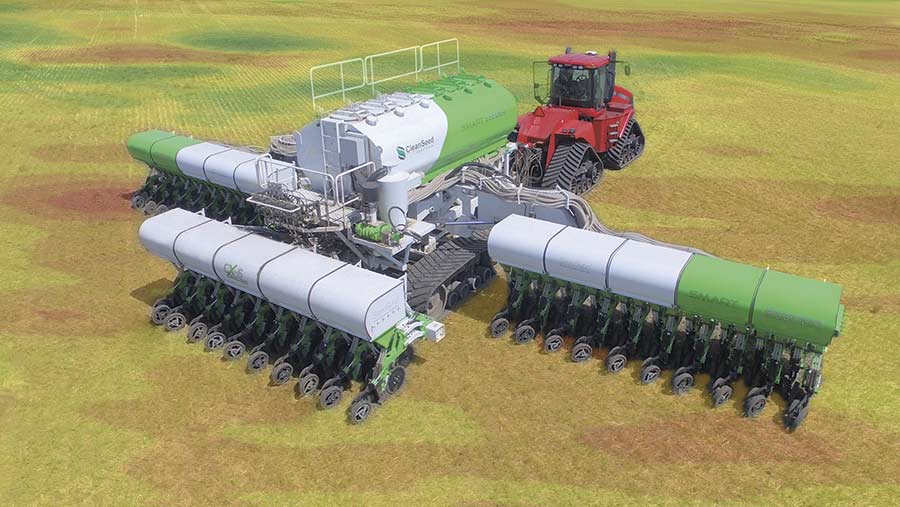 Metering is the key

Farmers feel like they’re very accurate because when a field is drilled it has used their precalculated quantity of product, according to Clean Seed’s Noel Lempriere.

However, if you go down to a square-foot level, you will likely find areas of the field where the rate is wildly off what you wanted.

The answer, according to the designers, lies in electric metering which takes away the flaky distribution problems of air seeders that meter the inputs at the main tank, which are usually a long way through a tangle of plastic tubes from the coulter tip.

The Smart Seeder’s pipework runs in the normal manner from the seed and fertiliser tanks to the row units; nothing unusual in that.

However, it feeds a bank of six mug-sized pre-holding stations that sit on top of each row assembly. 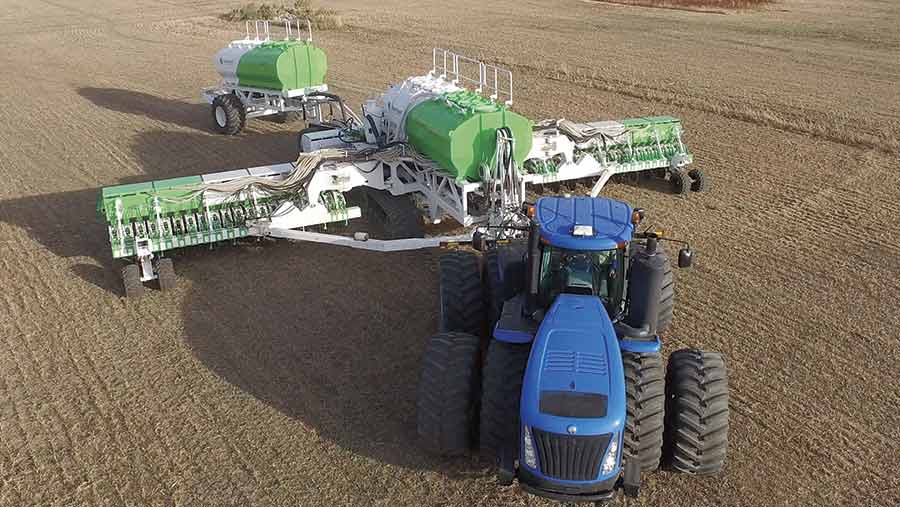 These metering mugs are kept fully-stocked with seed and/or fertiliser and operate independently of their neighbours so, rather than applying generic blends of fertiliser like most air drills, farmers can be as creative as they like with their inputs because they are mixed as they drop down the opener chute.

Each of the 360 automotive-grade electric metering units is controlled wirelessly from a tablet in the tractor cab and they are powered by an on-board 24V AC circuit kept fully juiced by two batteries and an alternator.

Amazingly, they sap just 1,900W which, as a comparison, is less than it takes to run a regular hairdryer.

Foam rollers grab the seed or granule from the mug and drop it by gravity into one of three stationary funnels, just like an old box drill.

To change which of the three funnels the material is dropped into (and so which of the coulter outlets it falls through) there is a threaded rod that can be slid 75mm left or right, while there’s a deeper central outlet for fertiliser.

The flotation tyres on each wing are also fitted with speed sensors, so as the rig negotiates an obstacle it will compensate for the turn by decreasing the drilling rate at the innermost row and gradually increasing it to the outer one. 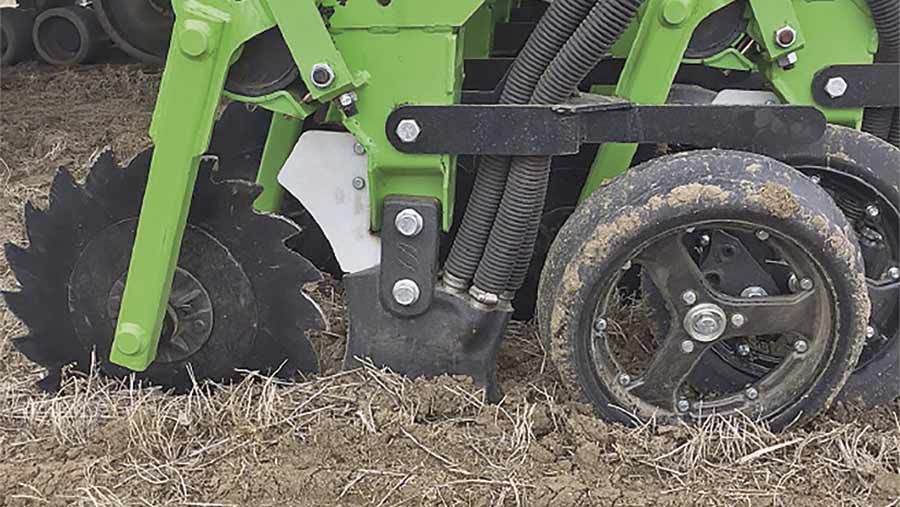 The openers are built to move just enough soil to encourage rapid root development without getting too much surface disturbance.

A big 610mm saw-tooth vertical disc coulter bites through the trash and is trailed closely by a three-part opener that delivers the seed and fertiliser.

The latter is typically dropped about 60mm deep – well below the seed – and is covered by 50mm of soil. The seed is then placed on the loose portion of soil, through any one of the three apertures, and a closing wheel (rather than a packer) throws over a blanket of dirt to finish the job.

That gives farmers the option of drilling paired rows or, often in the case of Canadian farmers, throwing down stacks of urea between crop rows to get rape crops growing.

Having a fairly loose column of earth encourages quicker root development than those drills that work by scratching out a stiff channel and ramming soil back over the seed to close the slot, says Clean Seed.

In turn, that allows water to permeate through the surface and also climb wick-like from underneath, so users should see pretty quick emergence compared with a conventional system.

It might seem a little overkill to have six separate tanks along with the associated pipes and metering units, but it allows buyers to make very specific blends of N, P, K and S at each individual opener.

There’s also the option of playing about with seed varieties. UK farmers, for instance, might want to mix seeds with different disease resistance qualities, or those that favour stiff or light soil types.

Research into this particular area is pretty thin on the ground at the minute because there haven’t been the tools to apply it, so the CX-6 opens the door to a whole new world of intercropping and multivariety drilling.

The individual row units are fed by a medley of six separate hoppers that have been carefully proportioned so each one empties at almost the same time.

Total capacity is 17,600-litres, which is fairly modest by North American prairie standards where the big boys often have up to 35,000-litres at their disposal.

Individual tanks range in size from 1,450-litres to 5,285-litres but, provided each hopper is filled with the most suitable input, the drill should still be able to outlast a lot of its larger foe on each load, which keeps downtime to a minimum.

Each chamber uses its own Clean-Seed-built venturi system to shift the material to a vacuum meter. Pressure differential is the key here, so it applies minus-2psi in the tank to encourage the product to flow.

There are also two fixed-rpm fans on the front of the drill that run at different speeds.

The first is for the venturi system and spins at relatively slow 5,200rpm to shift the high volume of material from the tank. A second fan acts as a boost system by whizzing round at 6,300rpm and at high pressure to keep the lines clear.

The hoses that lead to each opener are fairly run-of-the-mill. The difference is that, while an air seeder fires material at huge velocities that cause the seed to have a sand blasting effect on the hose wall, the Smart Seeder sends them down at a comparatively leisurely pace.

That low velocity could also lead to marginal improvements in germination rates because of fewer microfractures in the seed.

Quick filling on the go

Frequent half-hour, stop-and-go fill-ups have long been the choke point in high-speed drilling operations, so Clean Seed has developed a hook-on nurse cart that mirrors the tank layout of the main drill.

The idea is to leave it in the field roughly where the drill is expected to run out of seed. A winch cable on the back of the CX-6 means the driver simply reverses within 5m of the cart and then reels it in until it’s latched on the back.

Once onboard, the rig can carry on seeding while the tanks are filled on the fly. Initiating the transfer is done wirelessly from the cab and the whole process takes 23mins, after which the cart can be dumped on the headland and collected by a waiting helper.

All that kit means that, as it stands now, the CX-6 tips the scales at an eye-watering 35t even before the tanks have been filled.

A set of 36in Camoplast tracks do their best to spread the weight but are limited to a 15mph/24kph travel speed. The other logistical challenge is the width – even when folded it sits at 8m on the road, which is obviously out of the question for UK highways.

However, moves are afoot to shed some of the weight and width, so in the coming years it will be redesigned to fit along the skinny lanes of rural Britain.

A machine of such sophistication requires powerful software to control its operations.

The in-house developed Seed Sync system runs off a Windows tablet and information is transmitted wirelessly to each of the metering units via Bluetooth antennas. This avoids the need for a girthy harness of cables running from the cab to the coulters.

As well as offering full control of flat-rate inputs, it can also process variable-rate application maps. However, the major limitation at the minute is the resolution to which agronomists and farmers can concoct the seed and fertiliser maps, rather than the ability of the drill to apply them.

Will we see one in the UK?

It’s no surprise the company is first focusing its efforts on North America, Australia, Ukraine and Kazakhstan.

The first demonstration units have been working this year across western Canada and the country’s largest dealer, Rocky Mountain Equipment, is now taking orders for 2018 models.

We’ll have to wait a bit longer to see the machines in western Europe. That said, the company fully intends to enter the UK and European markets with its coulter and metering assembly once it has redesigned the chassis, tanks and running gear to fit with farmer demands this side of the pond.

Some of the Clean Seed technology has a history that stretches back to the 1980s when businessman and inventor, Noel Douglas Lempriere, began working in the US’s conservation tillage movement.

He developed a retrofittable opener in the 1990s based on deep fertiliser placement and shallow drilling depths to create loose, agitated soil around the seed to maintain good water filtration and seed rooting.

In the early 2000s, Dr Lempriere began working on electric metering systems and fitted his combination of an opener and metering kit onto small 4m no-till drills for developing nations. Unfortunately, Dr Lempriere fell ill and could not see his project to completion.

It wasn’t until 2011 his two sons picked up the baton by forming Clean Seed with the aim of developing a super-accurate broad-acre drill.