Essex firm Brocks has been busy expanding its range of tillage machinery over the last couple of years and now has a tine drill to accompany its Super Till cultivator and mammoth 24m Double Lock rolls on the product list.

Launched at the annual November open day at its Essex base, the new planter is available in widths from 8m up to 13.3m and was born from a prototype model made a few years ago that is still working on a local farm.

In a similar way to a many of the large-scale drills from makers such as Horsch and Amazone, the monster 5,500kg split hopper on the Campaign is mounted to the rig’s drawbar rather than above the drilling unit. 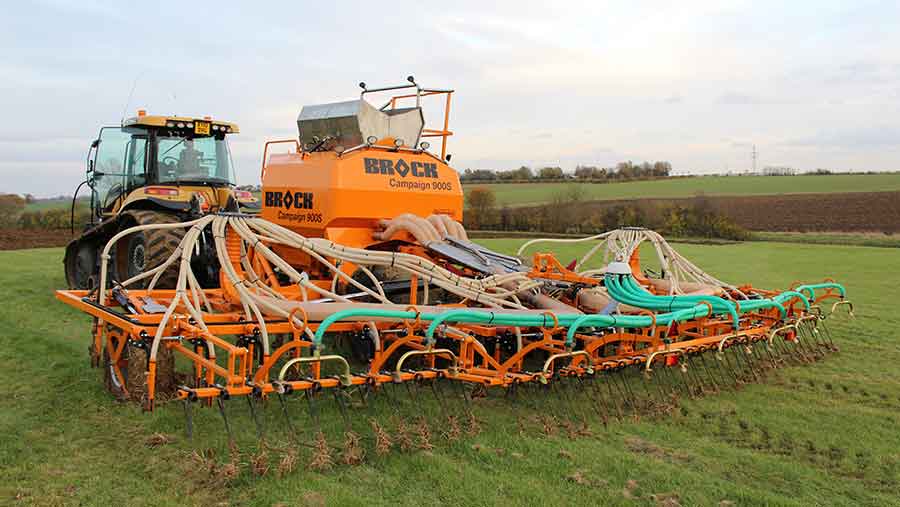 A 50:50 divide in the main compartment means fertiliser and seed can be drilled at the same time, along with two micro-granule hoppers for Avadex and slug pellets holding 400kg each, so four products can be applied in one pass.

A walkway raises around one side of the hopper when the hydraulic lids are opened, which gives safe access for splitting seed bags rather than crawling around under the swinging sack.

The Streamline model that Brocks had on show is the top spec machine available, which comes with full LED lights all round and an injection of technology from guidance specialist LH Agro. The drill uses Topcon GPS software to control headland shut-off and automatic calibration.

The drill toolbar unfolds and sits behind the two transport wheels, which don’t actually shoulder any weight in the field to minimise compaction problems. Instead, three hydraulically adjustable depth wheels control the seed depth.

With the bulk of the seed hopper on the chassis rather than above the tines, the drilling rig can skip over wet soils more carefully. It also pivots from each of the drill sections to hug field contours and maintain a more consistent working depth.

Low disturbance tines are standard on the drill at 150mm spacings, although if it’s a different set-up you need then optional single tines along with 450mm discs and packer wheels can be fitted.

The company is convinced the new drill offers users a few trump cards that its competitors don’t.

For example, dumping any leftover seed on the yard floor to change varieties is often the only way to prevent seed contamination, but the Campaign has a small swing-out auger below the hopper that can empty the tank into a bag rather than the yard floor.

An on-board blow-down hose can also help shift the seed from the harder to reach areas in the tank.

Stashed away in its own storage holes by the hopper, the hose fastens together using the same clip and lock fittings as a sprayer water pipe, providing full reach across the top platform and deep into the hopper. An 8in Carre fan powers the hose and the three seed distribution units.

Drilling in November means there’s more moisture around, so the Campaign has a diesel-powered heater mounted in front of the hopper to dry the drill before use.

Firing the generator up 20min before you need to start heats the chassis to get rid of any overnight moisture and stop seed sticking in the hopper too, claims the company. There’s also a large sliding triangular toolbox for stashing points and clips.

The 8m drill on show will retail somewhere around the £127,000-mark and requires 280hp up top, whereas the larger 13.3m version will command closer to 400hp.

Also new from the Brocks stable is an addition to the imported Farmet range made in Czech Republic. The Falcon drill comes with a front set of double-row discs that have the option to drop them off when the wet weather hits and comes in widths of 3-8m.

Another carrot will be the option of widening drilling rows by shutting off individual coulters.

Flicking a switch in the cab changes the drill from a cereal planter with narrow spacings to a OSR seeder with wider gaps.