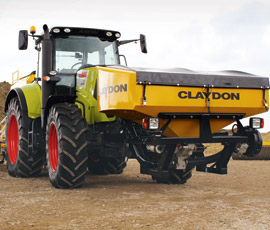 Suffolk-based drill maker Claydon has given the press a sneak preview of some of the products it will be launching at this year’s Cereals event.

Claydon’s new seed and fertiliser drill will be of most interest to those in Scotland and Northern England. It is essentially the same as the maker’s 3m hybrid strip-till machine, but has been fitted with a split hopper and separate metering mechanism.

The new hopper is divided equally between seed and fertiliser, so it can accommodate about 750kg of fertiliser and 750kg of wheat seed. It’s also mounted further forward to put the bulk of the weight nearer the tractor.

On standard machines, fert is placed behind the leading cultivation tine. This puts the nutrients 75mm to 100mm below the seed, ready for the roots to grow into it. Users also have the option to move this to the seeding boot if they wish.

This season Claydon is also offering a pre-emergence marker kit for the first time, which can also be retrofitted to existing hybrid machines.

Those that want a higher capacity seed and fertiliser drill can opt for the maker’s new front hopper instead. This has a 1,250kg capacity, hydraulic fan and its own metering system. However, it is controlled using the drill’s existing RDS Artemis system so no extra electronics are required.

The new hopper can also be used for seed for those that get bored with topping up the drill too often.

Liquid fertiliser users are also catered for with a 1,000-litre fibreglass tank. This uses a cast pump and has distribution nozzles on the leading tine. Bigger 1,500- and 2,000-litre stainless steel versions are also available.