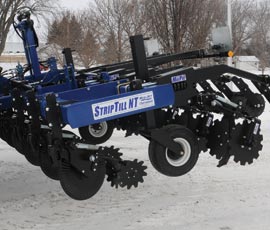 A US manufacturer specialising in tillage implements and fertiliser placement technologies is set to launch into the UK at this year’s Cereals, offering a different option for high-speed strip tillage.

Blu-Jet products from Thurston Manufacturing, Nebraska, include disc, tine and combination implements for broad-acre tillage. They have been scaled and modified to suit European field working and road travel requirements and are imported to the UK by south-west company Amia.

“Our Galaxy strip tillage units, available on a number of frames and toolbars, are quite different from others,” says Andrew Venton, export and territory sales manager. “For one thing, they are noticeably longer from the disc coulter to the basket crumbler because of the large clearances needed to avoid residue congestion.”

That will be welcomed by UK growers aiming to strip-till at speed after high-yielding crops, he says. So, too, will the lack of parallel linkage mounting for several elements.

“You don’t want the seeding and fertiliser placement units lifting out because the leading coulter has hit a stone – that just results in uneven depth,” says Mr Venton. “Coulter and crumbler elements are individually spring-mounted so they are protected, but work consistently at the depth required.”

Strip-Till units can be equipped for dry or liquid fertiliser placement in configurations to suit wheat and maize. British firms will also use the plots to give visitors an opportunity to see new equipment working.

The Deep Tillage Seeder is Sumo’s first “conservation agriculture” implement, capable of working strips of soil in crop residues and cover crops while leaving undisturbed ground between the strips.

“It’s quick. Large areas can be drilled in one pass, soil structure improves and, in most cases, the cost and time savings are huge,” says Shaun Wealleans of Sumo.

Individually mounted seeding units articulate with ground contours and are governed by a constant pressure hydraulic system. A leading disc cuts through trash, followed by a tungsten-edged deep loosening auto-reset leg capable of working to 300mm.

Narrow row or 150mm band openers place seed before it is covered by angled discs and firmed in by pneumatic press wheels that also govern sowing depth.

Mzuri will put to work its strip-till drill, which is available in a lighter, easier-to-pull mounted format. Power requirement is down to around 50hp instead of 60-70hp/m.

French manufacturers planning introductions include Quivogne with a revised disc and packer cultivator. The Compact+ is an x-form disc cultivator with a choice of finishing tools fully integrated at the rear of the frame.