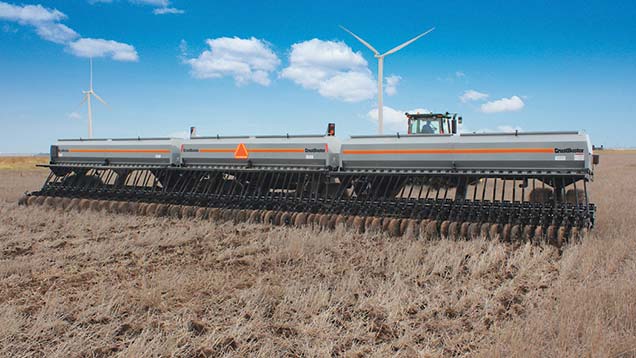 Box drills are usually the seeders of choice for small, mixed farms, but sowing set-ups do not get much bigger than Crust Buster’s 15m machine.

The American firm’s new three-section All Plant 4750 drill rides on gangs of walking beam flotation tyres to keep the 11,300kg frame above the ground.

It is designed to go straight into stubbles, and the company reckons it will chop its way straight through maize stalks and other tough-stemmed trash.

Up front there is a parallel linkage opener to provide constant pressure and five stages of adjustment from 60kg to 225kg.

There are also central filling versions that stretch to 18m and some clever folding systems to get the wings narrow enough for the road.

It will need just shy of 200hp on the front, but if you have not got a big enough tractor, or fields, for this version then the company also sells smaller double and single box set-ups.