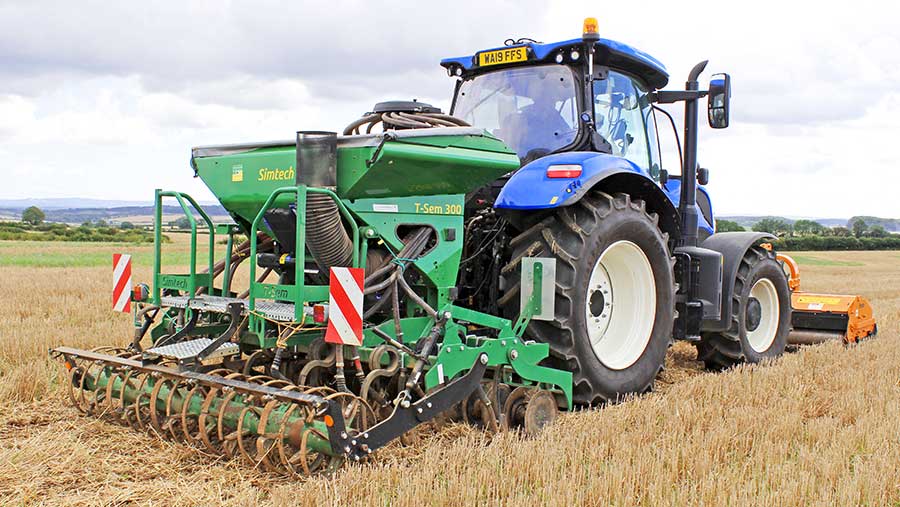 Simtech’s T-Sem no-till drill uses a disc and inverted T-shaped coulter to establish a crop without the need for any prior cultivation.

We visit Dorset farmer John Hawkins to see how his 3m mounted machine has been measuring up.

It’s a 3m Simtech T-Sem no-till tine drill that uses an inverted T-shaped coulter based on a New Zealand principle.

The firm’s standard drill uses a simple seed box, but I opted for the pneumatic version that has a Sulky hopper and seed distribution system mounted on top of the Simtech frame and coulters.

I usually run it with a 3m Teagle flail topper on the front so that I can knock down the previous crop residue and drill in one pass.

I bought it in 2018 when I made a dramatic move away from intensive min-till arable farming to a more sustainable, low-input system.

The old setup wasn’t paying on my acreage and land prices were so high that it wasn’t worth trying to get bigger either.

Instead, I signed up to the Mid-Tier Countryside Stewardship scheme and managed to get funding for some additional environmental projects from Wessex Water. 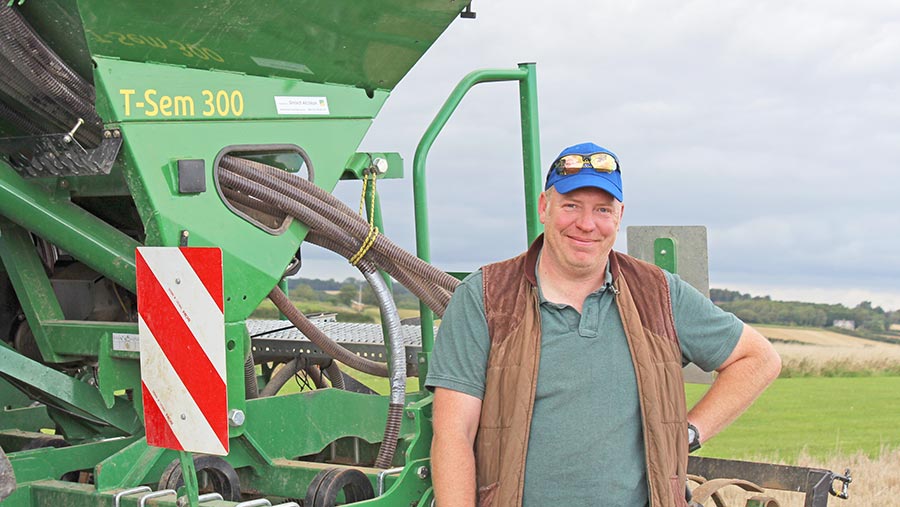 This has allowed me to reduce inputs and build fertility with grass and legume lays, which are in the ground for two years.

The drill fits in with the system perfectly as it allows me to direct-sow a wide range of crops very cheaply and quickly without damaging the soil.

Fuel use is only about £7.50/hour, and traveling at 8kph I can cover just over 1ha in that time.

At the front of the drill there’s a row of straight discs that cut through trash before the spring-tine mounted coulters run through.

These have an inverted T-shaped point that cuts an opening for the seed before placing it.

Finally, a Springflex roller pushes down either side of the slot to close it up.

For those that want to work on cultivated ground, there is the option of adding a front packer to firm the ground first.

It has performed well, but the best bit is how quick and easy it is to establish a crop.

It actually felt a bit strange last autumn when my neighbours were burning the midnight oil and I was finished.

In general, establishment has been very good, and it’s impressive how versatile it is.

It will happily drill direct into grass or hard-baked stubble, and as the tines are spread over three rows, it can deal with quite a bit of trash.

The T-shaped slot also gives good conditions (the so-called greenhouse effect) for seeds of all sizes to germinate.

However, there has been the odd mishap as I’ve been getting used to it.

I drilled some spring barley in February and it was a little wet so I lifted the packer to stop it clogging up.

This meant the seed slot was too open and the slugs ran riot.

Where it was set properly this wasn’t a problem, so I’ll look to drill a little later next year and keep the packer down tight.

I had a couple of problems when I was using the drill in rock-hard ground last August, but this wasn’t helped by the fact that I was pushing on a little too fast.

It’s supposed to be used at about 8kph, but I was going well over 10kph at times as I was trying to meet Mid-Tier deadlines.

First, the rubber ends on the seed tubes started splitting due to the vibrations from the tines.

These ended up getting replaced with John Deere versions, which haven’t given any problems.

Some of the U-bolts holding the tines to the chassis also snapped, but these have been upgraded to stronger versions.

In general, the drill is easy to use, but the fact that depth control for the discs, tines and the press wheels are all manual, means setup can take a while.

On my drill, the Sulky hopper and Simtech lower frame are slightly different shades of green, which is also slightly annoying.

However, these are all pretty minor complaints and I’m pleased with its performance.