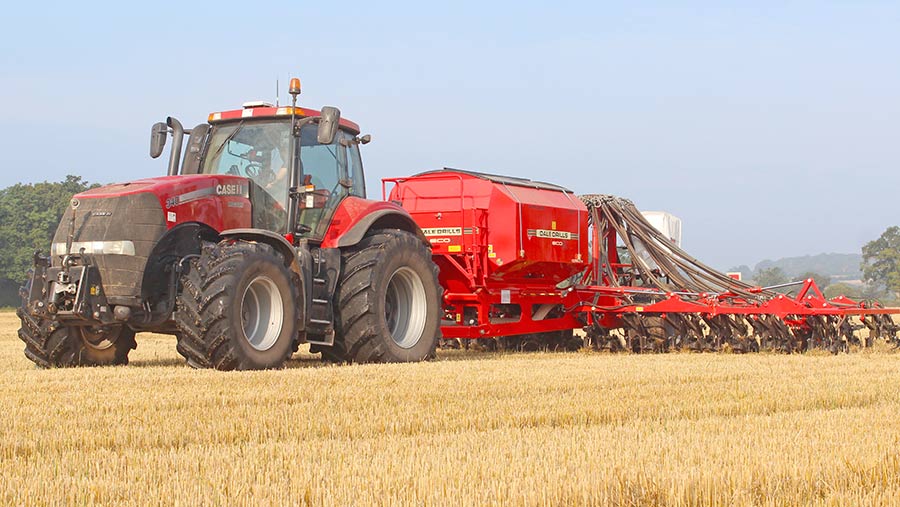 Worcestershire farmers Simon and David Fellows explain why they opted for Dale’s 10m Eco XL drill and how it fits into their controlled-traffic system.

We’ve got Dale’s 10m Eco XL. It arrived in July and ours is the first of the company’s new design – they actually ran this one on their farm for a year to make sure it was working well before we acquired it.

We used to run a fairly heavy cultivation regime that ended with a Vaderstad Rapid, but we were keen to improve our soil health and reduce establishment costs, so looked for alternatives.

The first drill to come was a 6m Claydon V-Drill, shortly followed by a Hybrid.

Sadly, those particular investment didn’t work out – there was too much disturbance for dealing with the blackgrass, they didn’t handle the chopped straw well and the V-Drill in particular was like pulling an anchor.

Although the drills weren’t suited to our long-term objectives, we still believe they helped the soil transition from heavy cultivations to no till.

We eventually settled on a Dale back in 2013.

Why did you change to a direct drill?

Controlled traffic farming (CTF) was the next logical step, particularly as we already had a 30m sprayer and 10m combine header.

We knew the system could be achieved with fairly low horsepower requirements – if 10m-wide gear could only be run with Quadtracs, high depreciation and high repair bills, then we’re out.

However, we wanted to manage our risk by maintaining a degree of flexibility.

That pretty much ruled out a disc drill – they’re unbelievably accurate in favourable conditions and several of our neighbours swear by them, but they tend to smear and suffer from hairpinning in wet, heavy ground. 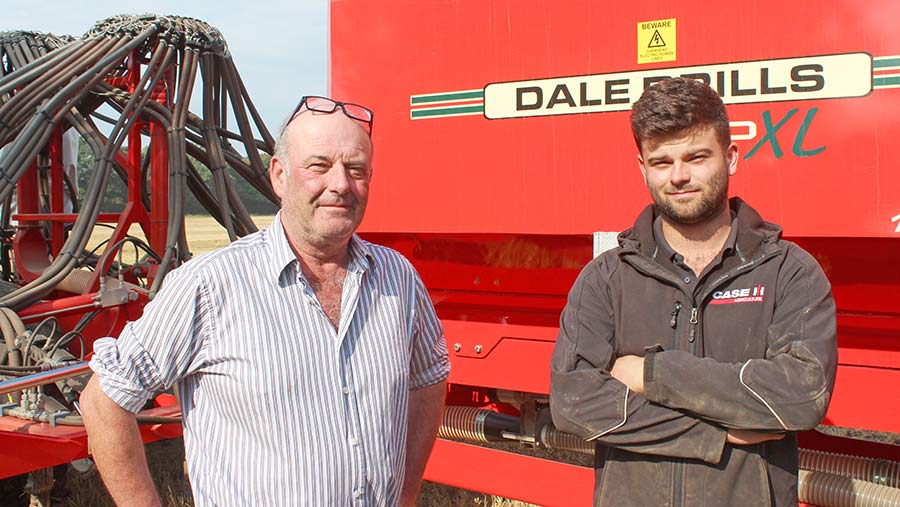 As tine-based drills go, the Dale is very low disturbance and gives us the option of working straight into stubbles or into a lightly disturbed surface.

For the latter, we use a 10m Bednar Swifterdisc to run over all of the ground going into cereals, no deeper than 30-40mm and as fast as possible.

This helps to incorporate residue as we chop a majority of the straw – something that has helped the ground better overcome rainfall, retain moisture and generally be more friable.

We have found this shallow pass of tillage also helps mineralise some nitrogen in the first stages of residue breakdown, which had been a problem we’d found with direct drilling.

We also subsoil all intermediate CTF wheelings in the same pass.

Going for the 10m Dale also means we are future proofed and have plenty of spare capacity, which is handy as we have given up September drilling to get an extra weed flush.

It works the same as any other Dale Drill, with the assemblies mounted individually on parallelogram linkages that provide decent contour following.

Each assembly carries two low-disturbance tines tipped with 12.5mm tungsten carbide-tipped points – one places the seed and the other lays fertiliser.

The tine only works at drilling depth so there’s no risk of pulling up any big clods.

We tend to put the oilseed rape in at 25mm and the cereals at 40mm, and row spacing is easily adjusted between 12.5cm and 25cm.

The three big changes from the previous layout have all improved performance in our eyes.

For starters, the three rows of coulters are spread further apart to improve trash flow.

The split hopper has almost doubled in size – it’s now 6t – and the hopper and wheels have moved further forwards to improve weight spread and make it easier to turn on the headland.

We have been really impressed – everything that we didn’t like on the old model has been addressed.

The fact that it works into cultivated ground gives us so much flexibility and means we’re not committed to true direct drilling, which, in our experience, would leave us slaves to the slug pelleter.

Our yields have remained pretty stable, yet we have slashed field time and hit spot work rates of about 10ha/hour.

That’s about our maximum because working speed is limited to 10kph, or a bit slower on cultivated ground to avoid throwing too much soil around.

We have also dabbled with cover crops, but they didn’t work for us.

The soils stayed too wet in the spring, so we missed out on the early drying days and were two weeks later drilling.

And we didn’t opt for the front disc option ahead of the tines, as this would have meant running the drill at 25cm row spacings – something we’re not fans of as we want a degree of crop competition.

That said, the disc is imperative if you’ve got any intention of drilling straight into green crops.

As for the tines, we tend to get at least two seasons out of them.

And the move from a conventional min-till system to our current process has saved us about £55/ha on establishment costs.

It is the complete package as far as a tine drill goes, but it will never match a disc in perfect conditions – the seed placement of a John Deere 750A is difficult to beat in our eyes.

We feel like we had a bit of a say on the design of this machine, particularly the position of the wheels and hopper, and the great thing about dealing with a company such as Dale is that they’re so accessible and will bend over backwards to fix any problems.

Our next step might be to look at our tractor fleet. The low draft requirements of the Dale mean we could slash horsepower on the farm again, perhaps by using something with a CVT gearbox.

We are currently running a Case Magnum 340 but reckon we could get away with something around the the 280-320hp mark in a smaller, more versatile chassis.

That would be more than adequate for pulling the drill, but it would also need to do a lion’s share of the primary cultivations.

Ideally, we’d like to be able to change tyre pressures on the move too, as we’re currently operating on a middle ground between what’s right in the field and what works on the road.