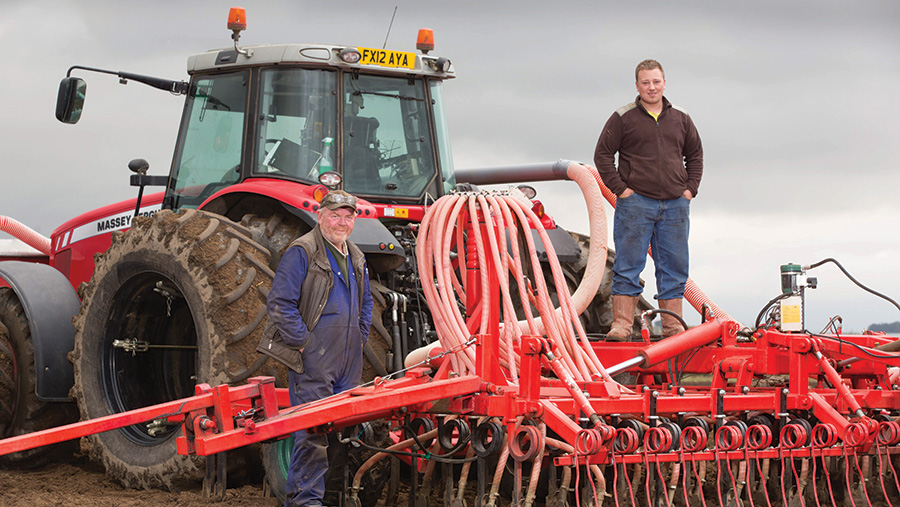 The wet summer of 2012 was forgettable for many, but the near constant rain saw an upturn in fortunes for combination drill makers.

The big arable boys across the East had been making the move towards big, heavy and wide min-till kit designed to cover the ground quicker and more efficiently.

But, while those drills glide through pristine soils, stickier stuff was throwing up a completely different problem better solved by old school tine or power harrow combinations.

The team at Coates Hall Farm, a few miles north of Lincoln, found they were on the end of exactly that problem.

Their 8m Vaderstad Rapid tore through the acres swiftly and accurately in tip-top conditions, but began to make a real mess on the heavy clay once it was soaked through.

Spring drilling was a particular issue, and the tacky land soon ended up tightly compacted around the headlands as the heavyweight rig swung around ready for the next bout.

The soil also had a tendency to bung-up through the mix of tines and presses.

The other problem came with late autumn drilling. Stale seed-beds were becoming a key part of the blackgrass battle, so farm manager Nigel Snaeth was holding off from spraying the cultivated ground for as long as possible.

That frequently pushed back the drilling date several weeks, which often meant conditions were less than perfect for seeding.

The new drill had to reduce soil movement and travel easier than the Vaderstad on the headlands.

That meant fully mounting the rig on a wheeled tractor, rather than having the scuffed turns of the twin-track Challenger.

The design was loosely based on an old 6m Simba Freeflow drill that the lads in the workshop already had experience of operating.

They knew it worked well on the stiff clay, though the packer at the back had the potential to make a mess so they decided to ditch it in favour of lightweight tidying tines.

The build job kicked off in the winter of 2013 and rumbled on for six weeks.

In that time the team spent a total of £20,000 on the parts needed to assemble the seeder.

A wedge of that went towards the heavy duty 100mm and 150mm box steel that forms the main frame.

With the total rear load edging beyond the 6t mark, the challenge was to balance the weight of a heavy-duty drill without the dualed-up Massey 7626 sinking axle-deep into the seed-bed.

On the plus side, it meant the drill’s bulk would be able to hack the bone-shaking 16kph travel speeds and also help maintain a more consistent depth without bouncing around.

The counterweight came in the form of an old Accord DF2 hopper, which was sourced from power harrow and drill specialist Andrew Guest for £4,500.

The 1t seed capacity helped keep the tractor’s front wheels on the deck with the drill in the air, though the team still had to rig up an extra 400kg weight to sandwich between the hopper and front links, and fit another load of blocks on the front of the Accord.

A majority of the clod bashing is done by two rows of flat-faced tines.

The 45cm legs slot into off-the-shelf carriers that were bought pre-cut by a local engineer and spaced at 200mm intervals to try and keep the trash flowing.

Various hole-and-pin arrangements mean the pitch and height of the legs can be tweaked to suit different shares and wear rates, while shearbolts protect them all from any nasty surprises.

Four old Accord drill wheels, including the stub axles and tyres, were also found sitting in Andrew Guest’s yard.

Each has its own turnbuckle to adjust the depth and a sight guide alongside it to get each one running the same, while big bolts on the main frame limit wing movement to keep drilling depth consistent.

Seed is fed through fat tubes from the front hopper to the mushroom-shaped distribution heads on either wing, and then on to the 48 tines spaced every 125mm.

Vaderstad levelling tines tidy up behind and are mounted on a turnbuckle-adjusted frame to vary their harshness and take account of any wear.

Gullwing markers are also fitted either side, but with the farm now running on super accurate RTK they are often left redundant.

A lot of the team’s workshop projects revolve around finding a way to beat the gnarly clay soils into submission.

The subsoiler is a particularly popular tool, and a nine-leg version was fabricated five years ago using Simba Flatliner legs spaced at 60cm and a DD-style packer at the back.

A 1,000-litre IBC fitted to the tractor’s front links carries fertiliser that is dribbled behind the deep-working legs via a Chafer metering system, and there is also room for a slug pelleter to be fitted at the back.

For a couple of years the subsoiler was used to drill the farm’s rape, but results lacked consistency because seed was getting lost down the deep slots and failing to germinate, so the team has reverted to subsoiling and Cultipressing ahead of the Vaderstad.