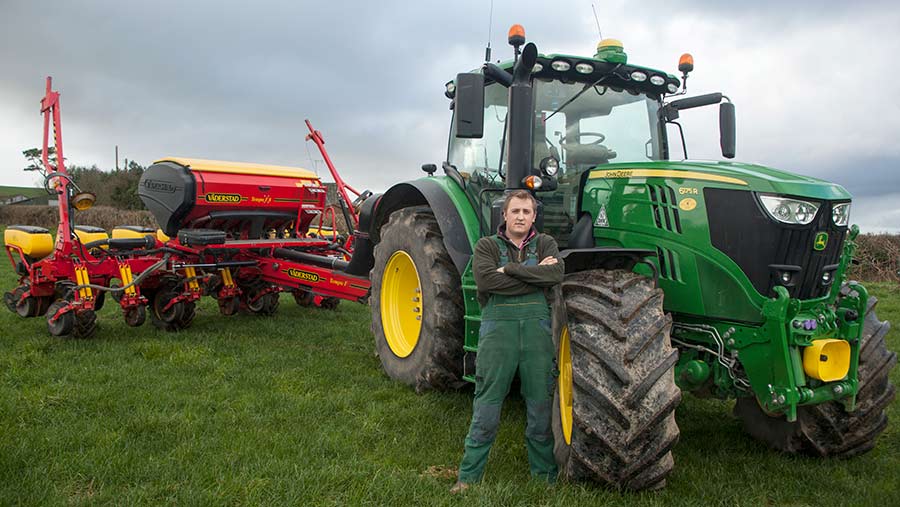 A growing list of customers and a desire to expand its current 280ha of contract maize drilling led Dorset-based family farm CR Dean & Sons to invest in an eight-row trailed Vaderstad Tempo.

Based about 11 miles west of Blandford Forum at Ansty, the farm has about 648ha of owned and contract farmed arable land and runs 400 head of beef cattle fed from 18ha of forage maize during the winter.

For several years, the farm drilled their own maize with a six-row Kverneland Accord machine, but after picking up contract drilling work for a large local dairy, word spread and demand for their drilling service increased.

Michael Dean, who farms alongside his father Philip, uncle Richard and cousin Chris, says this prompted them to purchase the new F 8 version in 2015 for just over £40,500.

“I’d heard good reports about the Tempo, but as they were new there weren’t many about in the UK so it was difficult to get a good gauge of what they were like.

“We were going to go for a six-row machine again, but then we got some more guaranteed work so we went for an eight row, which gave us capacity to expand,” explains Mr Dean.

After carrying out some online research, Mr Dean could see that planting accuracy at speed was mooted as one of the Tempo’s strengths, achieved with its Gilstring Seed Metering system and “PowerShoot” concept – one of the big attractions of the drill.

It uses pneumatic pressure to hold the individual seeds onto a metering disc as it comes out of each hopper, with three singulators at the top removing extra seed if two are in the same position.

A plastic rim at the bottom prevents removed seed falling down the spout to avoid doubles. Overpressure within the seed metering chamber is then used to fire seed downwards to the seed-bed at about 50kph.

Manufacturer Vaderstad says this makes the accuracy of the seeding process less sensitive to vibration at high speeds or problems when working on slopes.

“People want to be finished and all drilled up as soon as possible, so accuracy and speed is the key thing for us and we have seen nowhere near as many doubles or skips with this drill travelling at 12kph.

“One of our customers who grows about 25ha is particularly fussy about his drilling, but unusually he was very pleased after seeing the job the drill made the first time,” explains Mr Dean.

While drilling, the machine typically doesn’t drop below 98% accuracy according to the control box in the cab, says Mr Dean, although he did have some issues when it first arrived on farm.

Holes in the seed discs are gauged to the size of seed being planted and the standard for maize is 5.5mm, but where mixed- or small-sized seed is used it can result in poor accuracy as the air pressure is unable hold the large seed in place.

Conversely, two small seeds can be held in the same hole at once and Mr Dean says it makes emptying the hopper between seed lots essential for smooth metering.

“You’d arrive at one farm and it would be spot on, but on another where you have poor seed you’d get a lot of grief with gaps or doubles,” he adds.

The first port of call with the issue is to adjust the singulators or the pressure within the metering unit, which typically runs 3.5kilopascal, but can be increased with a twist of a dial.

“The last resort is changing the size of the disc, but it isn’t expensive. You can go down to 5mm for about £15, but it is best just to use good quality seed,” adds Mr Dean.

The only other gripes Mr Dean has with the drill is the awkwardness of emptying seed hoppers, which requires two pairs of hands, along with the fiddly adjustment of pressure singulators.

However, he says these issues have been noted by Vaderstad after customer feedback and rectified on the more recent models out of the factory.

“We would definitely buy another one, as you can get good speed and accuracy we haven’t really had any major problems with it. It does what we want, it does it efficiently and customers are happy with the job it makes,” adds Mr Dean.