Shifting the seed hopper from the back of the tractor to the front has made a big improvement in work rates for one farming family in Shropshire, as David Cousins explains. 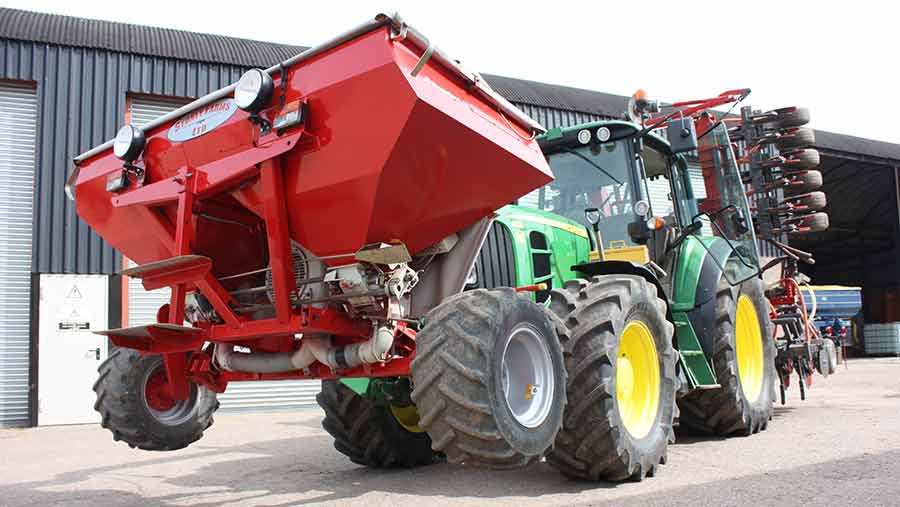 We can all dream about grain prices going back to £200/t, but the likelihood of that happening any day soon is pretty slim. But are there ways to improve throughput without giving the bank manager serious indigestion?

Shropshire farmer Bruce Udale reckons there are. He farms with his daughter Isabel and son-in-law Richard Moseley at Sydney Farms, near Kynnersley, and has increased their timeliness without spending a shed-load of money.

Their 500ha (1,260-acre) farm is concentrated on wheat, oilseed rape, oats and land for potatoes but they also have a 260,000 broiler enterprise on a neighbouring farm. So they have a lot to do.

Their land is a mixture of soils, including sand, medium loam, some heavy areas and even peat. Some of the lighter soil is fluffy stuff that pushes along in front of Cambridge rolls and doesn’t flow very well.

Suffolk coulters tend to bounce in this soil, he says, and discs are generally a better bet.

Where machines are doing a good job, the farm will keep them for a good while, like the Galucho cultivator with Guttler presses at the back.

The plough gets a lot of use – pretty much 1,100 acres/year – with the broiler muck going on first. The Simba Top Tilth gets a fair bit of work too, as does the farm’s Vaderstad RexusTwin.

One of the most successful machines on the farm was the 6m Bamlett Tive drive, which did a dozen good years, and was replaced with a Finnish-made Tume Agrimaster drill (pictured above).

“It was very well built,” says Mr Udale, “and even after many years there was no play in the bearings. We were even able to pull it with a 110hp MF tractor.”

When the time came to replace the drill, the farm wondered if they could take the best aspects of the drill and modernise it.

Enter the farm’s employee Dave Thomas, who reckoned that by moving the hopper from the back of the tractor to the front and replacing the worn-out seed distribution mechanism they could put together a machine that would improve workrates without spending a fortune in parts. 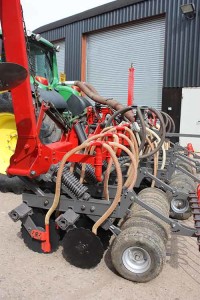 The distribution pipes from the Tume were ditched (they would have been too tall) and the tramlining kit was moved to the back of the tractor. It folds up well, says Mr Thomas.

Meanwhile, a set of Vaderstad 48 disc arms and hubs was found on eBay for £1,500 and he cut off the existing disc arms and then welded on new box sections.

Seed-rates can be altered from the cab and drilling oilseed rape works fine, he says, even down to a rate of 2kg/ha.

The front hopper (originally from a 6m Accord drill and cost £3,000 second-hand) can hold a 1t of seed, says Mr Thomas, and the 2.5m width is fine on the road. A bigger hopper would have been ideal but would have made visibility difficult.

It was pulled before, so they had to change the cogs to reverse the drive.

Compared to the cost of a new drill, this owes us nothing, says Mr Udale.