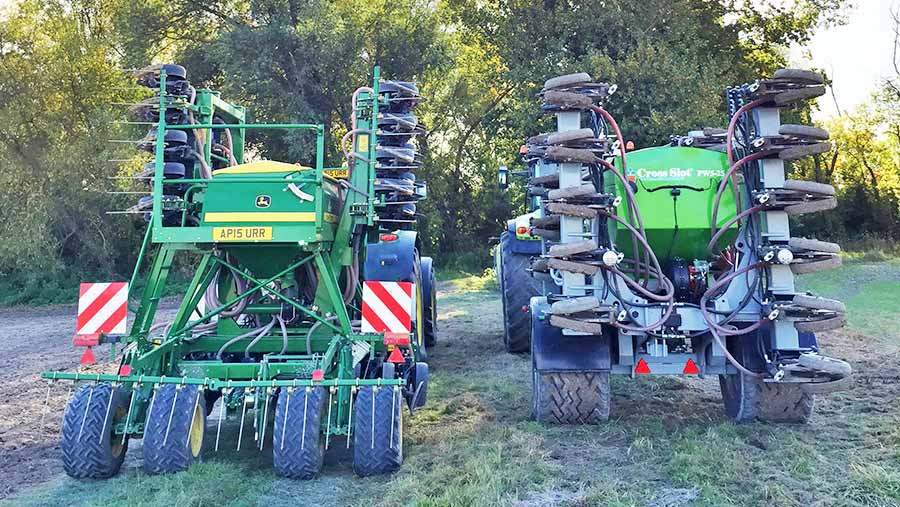 To till or not to till? It’s a question being asked by increasing numbers of growers looking seriously at the options for direct-drilling.

The arguments for and against no-till crop establishment are by no means clear-cut. Inevitably it comes down to the individual farm, its soils and what best suits the farming system that’s already in place.

For Cambridgeshire grower David Walston, it is a topic he has spent a lot of time researching as part of a wider objective of improving the soils at Thriplow Farms.

“For years we had run with a fairly conventional min-till system to establish monoculture crops – like many other farms,” he explains.

“But when I started looking closely at our yield maps and our spend on inputs over the past couple of decades, it became obvious we were shelling out more money for very little extra tonnage.

In fact, when you took varietal improvements into account, we were seeing a decline in yields – something I was obviously very keen to reverse.”

Delving deeper into the data, Mr Walston became convinced that the drop-off in crop performance and increased spend on inputs were down to a couple of key issues – a fall in soil organic matter and a lack of diversity in flora and fauna on the soil surface.

Pretty quickly he realised one way to halt this decline was to use cover cropping to ensure stubbles did not go bare – but that was just a small part of the picture.

Keen to investigate what more he could do, he secured a Nuffield scholarship and embarked on a two-year research project to discover what he could learn from other growers facing similar issues around the world.

“The key message I got was that, although soil health is a difficult concept to pin down, organic matter is very important for maintaining and improving soil condition,” he says.

“Across the globe the most common practice in conserving organic matter in the soil is no-till drilling. To me that seemed like the obvious route for us to go down as a first step in improving soil health.

“However, here in the UK no-till isn’t common practice and until recently there hasn’t been a massive choice of machines on the market capable of working in our conditions. It seems those farms that are doing it have had to spend extraordinary amounts of money on the bits of kit to do the job.”

Mr Walston wasn’t convinced that vast capital expenditure was necessary – or justifiable – to set out down the direct-drilling route at Thriplow.

“On our easy-working soils, I couldn’t see why our 16-year-old Horsch CO8 tine drill wouldn’t do a decent job in the right conditions,” he says.

“So we tried it and it worked. The crops came up and yielded just as well as the more conventionally established ones.

“But the CO has its pitfalls – without any proper slot-closing you rely on easily friable soils crumbling in over the seed, and its wide row spacing isn’t ideal for all crops. I wanted to see how well a disc-type drill would work in our conditions. Ultimately I would like something to run alongside the Horsch.”

With this in mind, Mr Walston decided he needed to set up a proper field-scale trial at Thriplow using the CO8, a demonstration John Deere 750A direct-drill and a contractor’s Cross Slot. 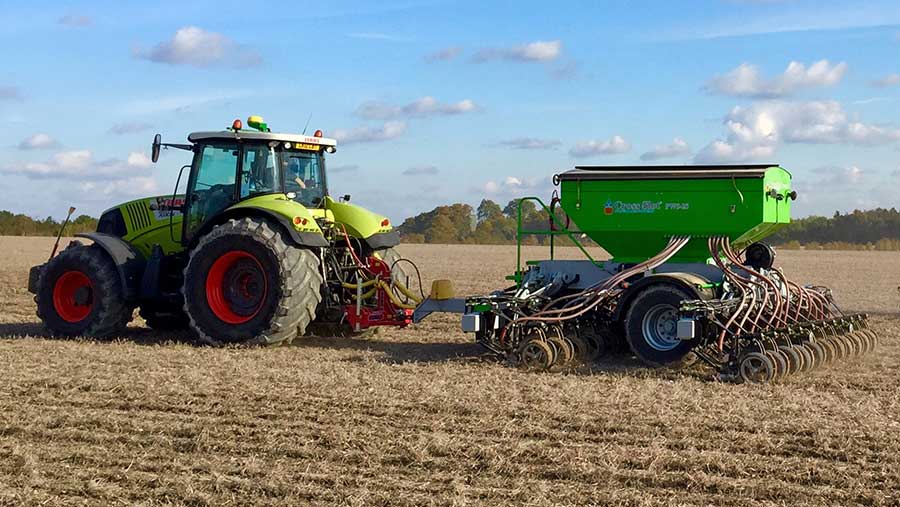 Designed in New Zealand and built in the UK by Primewest, the Cross Slot is often put on a pedestal as the ultimate no-till seeder with a price tag to match – a 4m version costs £116,000, while a 6m Kiwi-built version will set you back £170,000.

Intrigued by how such an outlay could be justified, Mr Walston wanted to see exactly how crops established with the three different machines would perform on his own land, side-by-side in one field.

So in October last year each machine was allocated a tonne of wheat seed and a 4.4ha plot to drill. The field in question has a fairly high clay content, but also lots of calcium, so it is relatively easy working. With each drill set to work at 30-40mm deep, seed placement wasn’t an issue. 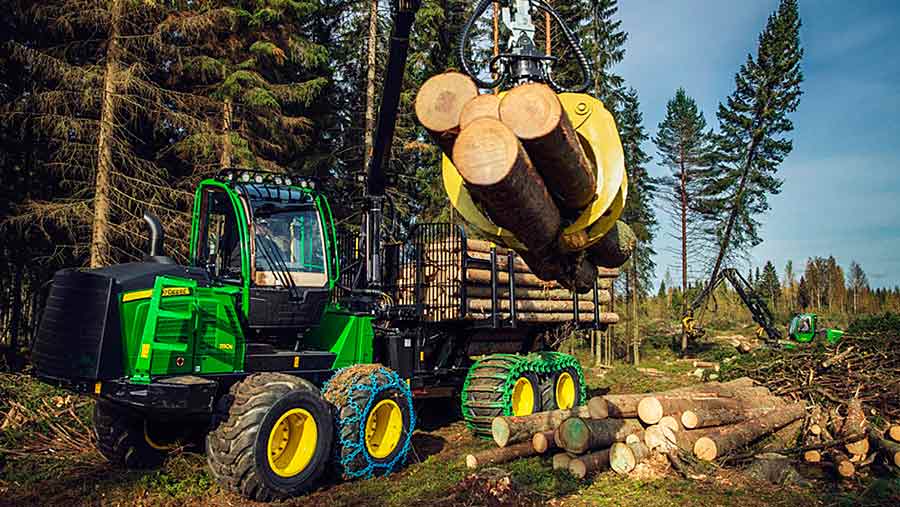 “At first glance, the Deere appeared to be causing more surface disturbance than the Cross Slot, but that was probably due to its narrower row spacing. It has 50% more openers per metre, so disturbance per coulter was probably about the same.”

What was surprising was the way the two purpose-made direct drills coped with coulter penetration in the relatively dry, hard soils.

The 6m John Deere weighs in at about 6.5t empty, giving a theoretical coulter pressure of 175kg per opener. In contrast, the 5m Cross Slot crosses the weighbridge at a massive 12t empty, thanks to its frame being filled with steel. That means there’s a monstrous 571kg of downforce generated by each coulter.

Despite this, at the lower end of the trial field, where the soil was heaviest, the New Zealand-designed machine needed every ounce of its heavyweight bulk to place seed at the correct depth.

“Last autumn wasn’t too dry and conditions weren’t that challenging, but you could still see the Cross Slot’s weight was essential to keep its openers in the ground,” says Mr Walston.

“I find this very worrying, given that the conditions were soft. I really doubt that no-till would be possible in a dry autumn on these heavier fields with the Cross Slot.”

As the crop came up, plant counts were done to add a degree of scientific credibility to the trial. The John Deere’s plots scored best, with 85% establishment, while rates for the Cross Slot and the Horsch were in the high 60s. Since then, tiller counts have been done each month to monitor exactly how well the different plots are performing.

By mid-spring, some marked differences had started to show themselves. It appeared that the areas drilled with the John Deere 750A had 25-50% more tillers than the parts of the field sown with the Horsch CO8 and the Cross Slot.

“I am surprised that we have seen such a dramatic difference in crop performance – back in the autumn I thought we would see no variation at all,” says Mr Walston.

“Honestly I can’t say exactly why it is, but at a guess I would suggest that it might be down to slugs. It was warm and wet as the seedlings started to emerge, so perhaps the slots made by the Horsch and Cross Slot provided a better home for the slugs than the Deere’s drill row.

There might be something in that, as many of the NZ Cross Slots are sold with a built-in pelleter.”

So what could that mean for the way crops could be treated?

“The main thing that’s different about the wheat drilled with the Deere is that – despite it having the same number of plants per row – there are higher plant populations because it has the narrower row spacing – 167mm rather than the Cross Slot’s 238mm or the Horsch’s 250mm,” says Mr Walston.

“Potentially that could give us the option to reduce seed rates by 20% and save £10-£20/ha. But ultimately we can’t make a judgement call on that until we have seen the harvest results. Once we know how much each plot has yielded, we will know if there’s a true difference – it’s the tonnage it the barn that counts.”