French farmers are established as some of Europe’s pioneers in the brave new world of cultivation-free drilling and pre-season cover crops, so it’s no surprise that the country is home to more than a handful of direct drill manufacturers.

Sulky and Sky are just two of the household names that have their own specialist disc drill division and they’ve since been joined by Novag – a company that builds nothing but no-till seeding rigs.

The one-product company is the brainchild of a French farming trio led by Ramzi Frikha, who spent three years researching and designing the heavy-duty disc drill.

Many aspects of the T-Force design have been seen before but the company hopes small tweaks to a time-proven system gives it the edge over Cross Slot and alike, particularly when working in cover crops. 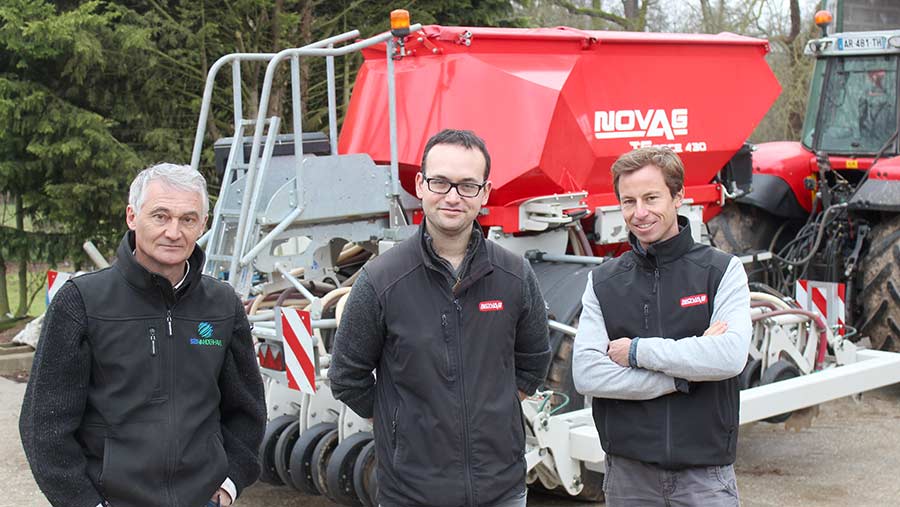 The business end of the drill starts with a straight-sided, serrated disc that bites into the ground to keep it turning. Each disc is flanked by a wing that shaves of any sticky soil dragged out of the slot to avoid bung-ups in wetter conditions.

Working depth of each 575mm tall disc can be adjusted separately on winders above the packed wheels, which makes it possible to sow deep maize and a shallow clover cover crop at the same time.

The openers weigh 100kg each and hang off a heavy-duty frame, but where the going is particularly tough operators can also call on individual hydraulic rams to ramp up the downward pressure to a maximum of 500kg per coulter. 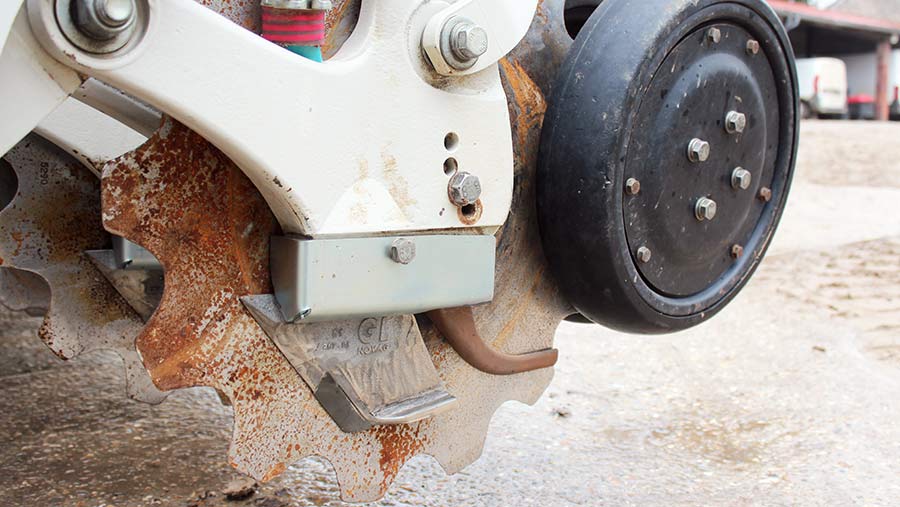 A network of pipes sees the rams plumbed into one big hydraulic block. Most of the time they work in unison, but diaphragm accumulators act as a suspension system that allows the openers to follow the ground undulations without varying the downward pressure.

It’s worth bearing in mind that the openers are designed purely for zero-till jobs, so any ground that has been agitated ahead of the seeder will limit how well the discs grip terra firma.

Novag’s seed placement system forms an inverted T-shaped slot in the ground using a pair of narrow carbide-based blades either side of the disc.

The idea is to create a pocket under the surface that traps humidity and forms an appealing micro climate for the seed. Having a ceiling above the seed also makes it much easier to close the slot and improve the contact with the layer of soil on top.

This inverted T system helps Novag (and Cross Slot, for that matter) avoid two perennial problems of standard disc drills. One is hairpinning, where straw trash lies lengthways in the slot underneath the seed and hampers germination rates. The other is the V-shaped channel that creates the perfect highway for slugs and often has stiff, impenetrable walls.

Each blade has its own outlet positioned 2cm from the other and can be run at different depths, so owners have the option of drilling seed and fertiliser or two different crops at the same time.

For those not wishing to drop any fertiliser while drilling, it’s possible to run only one half of the T-shape blade arrangement. This helps minimise disturbance and also saves a few quid on the wearing metal bill.

The sheer weight of the frame means standard pressing power is up to 400kg, but for seriously stiff land operators can load wafer weights on either wing to take that total to 500kg.

The need for downforce is heavily dependent on soil conditions, of course, and most are unlikely to require much more than 100kg. This figure can be adjusted through the monitor, but there’s also an automatic mode that tweaks things on the move by calculating the required pressure using sensors on the opening discs.

Standard format for the 3m, 4m and 6m models is a combination of 2,200-litre seed and 2,000-litre fertiliser hopper with the option of two extra 120-litre small seed bins.

The main hoppers use Accord’s time-proven metering system and, once calibrated, are controlled via Novag’s own in-house designed 7in control box. If fitted, the two smaller hoppers get their own metering units for sowing different cover crop mixtures at different rates.

Elsewhere, the two-spool hydraulic system has its own radiator that helps cool down the tractor’s back-end oil while also warming up the air around the fertiliser, which is particularly useful when it’s damp.

Underneath there’s 800mm-wide radial rubber as standard, but buyers can also spec a central tyre inflation system if the drill is clocking up a lot of road miles between field blocks.

Can I buy one?

There’s currently no UK importer, so sourcing one will require a bit of leg work.

However, the company has grand plans to expand across the rest of Europe over the next couple of years and, with drills already working in France, Germany and eastern Europe, there’s a good chance it will make the jump across the Channel by 2018.

He’s a zero-till convert and hasn’t run a plough through his mix of chalk to heavy clay ground for over 20 years. In fact, for the last three years he has hardly shifted the ground at all after deciding his soil structure was sound enough to take the plunge into a full no-till system.

Mr Maignel was one of the first French farmers to buy a 4m Novag drill, which he uses for every part of the OSR – wheat – barley – faba bean – wheat – spring pea rotation.

“The main motivations for going zero-till were to reduce the reliance on herbicides and try and get the better of resistant weeds. I also wanted to improve moisture retention in the soil across the chalky patches of ground.”

“I looked at Sky and Sulky machines but my neighbours had trouble with oilseed rape germination because of hairpinning in the slot, so I chose the Novag,” he says. 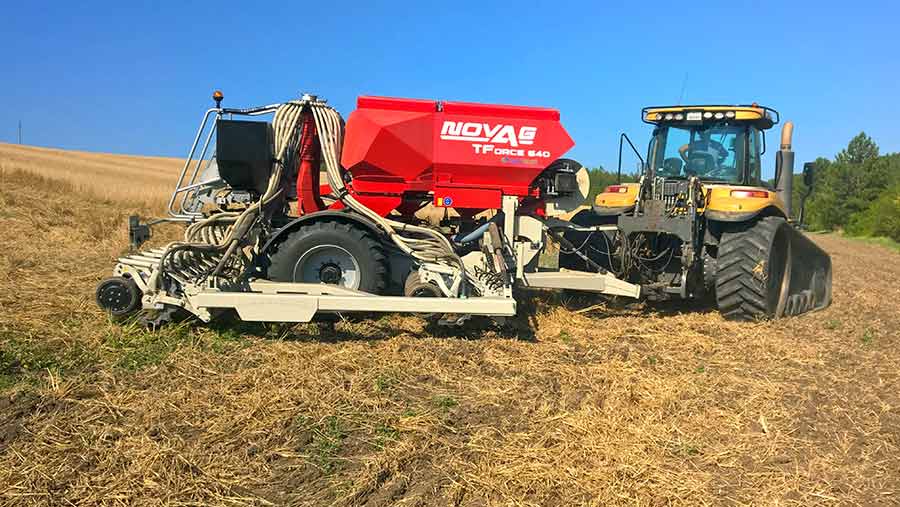 “Tine drills were never really an option because they refuse to run in a living cover crop and cause much higher levels of soil disturbance that encourage weed seeds to germinate.”

The biggest challenge is the obvious labour pressures caused by drilling mid-harvest, but it’s important that the faba bean and oat-based cover crop goes in as soon as possible, according to Mr Maignel.

“I was initially concerned about crop establishment levels without any tillage activity, so in the first year of zero-tilling I increased the seed rates by 20%.”

“Germination ended up being almost the same as it was under the previous regime, so the following year I cut it to just 10% higher than the min-till rate and with establishment still strong I’ll probably revert to my previous seed rate this autumn.”

The vigour of the growing crop has attracted interest from other local farmers who comment on the plants’ keenness to get going, says Mr Maignel.

He reckons it’s down to the good seed-to-soil contact caused by the T-shaped slot, particularly in oilseed rape crops drilled straight after harvest where the small seed often refuses to germinate when sat alongside rotting straw.

Slugs provide the biggest headache for most direct drill users, and the Novag is no different.

Pellets offer the obvious form of control, but a straw harrow or shallow harrow can be a useful tool for exposing the eggs and also wiping out any mice in the field.

“It’s a pretty quick job – I can travel close to 20kph in the field, but it’s worth avoiding where possible because the small amount of tilth can still affect the biting ability of the drill disc into the ground.”

Keeping disturbance to a minimum also means recommended travel speeds aren’t much more than 7kph, though the company reckons that can climb to a maximum of 10kph in well-rooted cover crops.