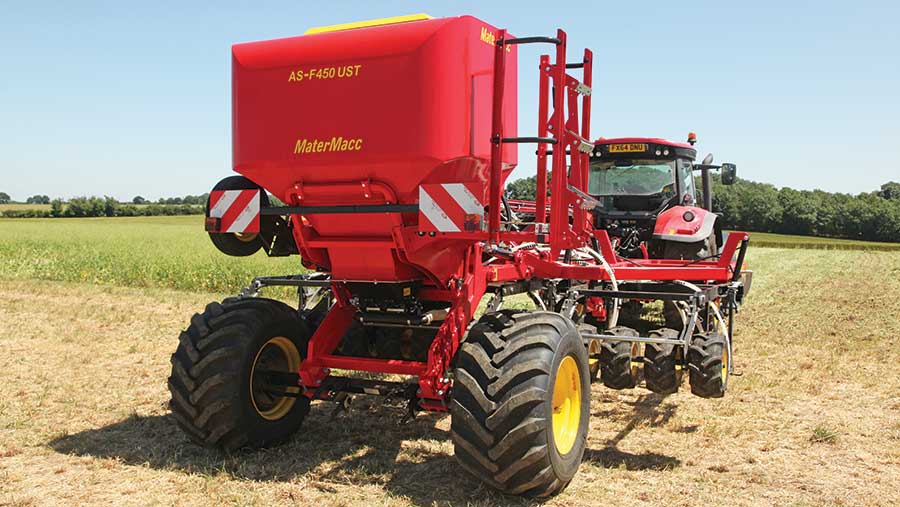 Italian manufacturer MaterMacc is hoping to break in to the growing direct drill market with its versatile and easy-to-pull AS-UST tine-based seeder.

Best known for its precision maize drills, the company – with a factory in San Vito al Tagliamento, about 100km north-west of Venice – has enjoyed a limited presence in the UK for several years.

It is now actively seeking dealerships to sell its range of products and has already signed up Lincolnshire-based Robert H Crawford & Son of Frithville, near Boston.

The trailed AS-UST tine drill was a last-minute addition to the line-up of kit on show at this year’s Groundswell no-till event near Hitchin, Hertfordshire.

The model being demonstrated was a 4.5m version used on the continent, but as this is unlikely to fit into any UK establishment system, potential buyers will from August be able to order in 4m and 6m widths with tramlining.

MaterMacc’s Alan Toffolo told Farmers Weekly the machine’s key attributes included a low horsepower requirement of just 120-130hp for its 4.5m version, even on heavier soils, with a minimum working speed of 10kph.

The tine openers are on a parallelogram and hydraulically pressurised to follow the contours of the soil, and a tungsten-tipped chisel point leads two 22cm wings, which look like the winglets seen at the wing tips of a passenger jet.

Both slice and lift the soil just below the surface, with seed placed either in single or twin rows each side before a gang of 17×8 R8 low-pressure wheels consolidate soil behind each coulter. Fertiliser can also be placed directly behind the tine if required.

The ability to place seed either side of the tines on 30cm centres gives flexibility on row widths, with blocking off outlets or lifting legs out of work enabling seeding on 30cm, 45cm, 60cm and 75cm spacing.

An additional benefit of the opener is that it slices through and kills any growing weeds in the seeding zone. As such, the company says that with GPS guidance or optional bout markers, the drill can double as a mechanical hoe after crops emerge.

The show model had mechanical metering, but any future orders will have an electronic system to allow for variable-rate seeding and section control. A basic control box in the cab also features a seed blockage alarm, and hopper capacity is 2,000 litres of seed and 1,000 litres of fertiliser on the demo drill.

One thing that might put off the die-hard conservation agriculture converts is that the drill struggles to drill directly into tall, bulky cover crops such as mustard or oil radish without them first being mulched or crimper rolled.

However, the AS-UST makes easy work of short covers such as cereal-based mixtures, and the price tag might appeal to those wanting to move away from cultivations and unwilling to shell out a six-figure sum for a top-end no-till brand.