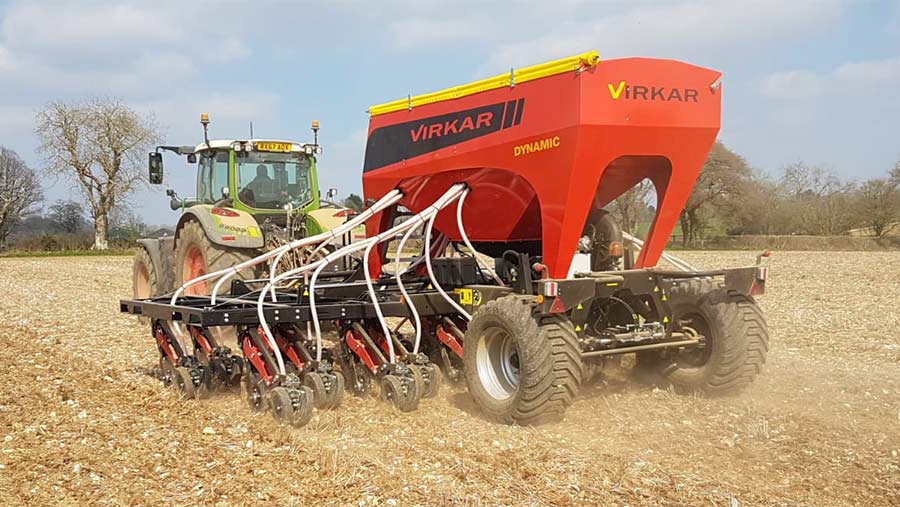 The continued concerns over the future of key chemicals and the knock-on effect for those operating zero-tillage systems seem to have done little to stifle the direct drill market, with yet another new name added to buyers’ options.

The Spanish-made Virkar seeder will make its public debut at next month’s Groundswell demo day and comes from a company that specialises purely in no-tillers – a sector that now commands about 20% of UK drill sales.

Its cutting disc and tine combination were developed by a farmer looking for a system to match his stoney, uneven ground.

Having decided to build his own drill in 2012, they started appearing on the no-till radar three years ago when an export business was established that saw them first shipped to France and now to the UK and Denmark.

Basingstoke-based Samagri has taken on British distribution, which it will run alongside its Kockerling and Sumo franchises.

The firm’s Sam Berry decided it was a drill that could suit his farm’s 700ha of undulating terrain.

He reckons it’s pretty good candidate for anyone considering making the switch to a no-till system, giving soils a chance to adjust by stirring up a very narrow band of tilth, while leaving the ground between untouched.

Disc, tine, or both?

Mr Berry was in the market for something very specific – a front disc to cut through trash and create a micro-tilth, and a tine to deal with seed placement.

Running a straight disc and seeding boot can sometimes cause a smeared, impenetrable slot on sticky ground that tends to limit the crop’s ability to root down quickly and get off to a fast start.

Instead, the front-running turbo disc has a rippled profile to form a micro-tilth. As it does so, it opens the 12mm-wide slot that acts as a passageway through which the following tine and boot can glide without too much extra disturbance.

This should encourage fast early rooting, says Mr Berry, and over the 40ha it has covered this spring, he has noticed strong early crop vigour. 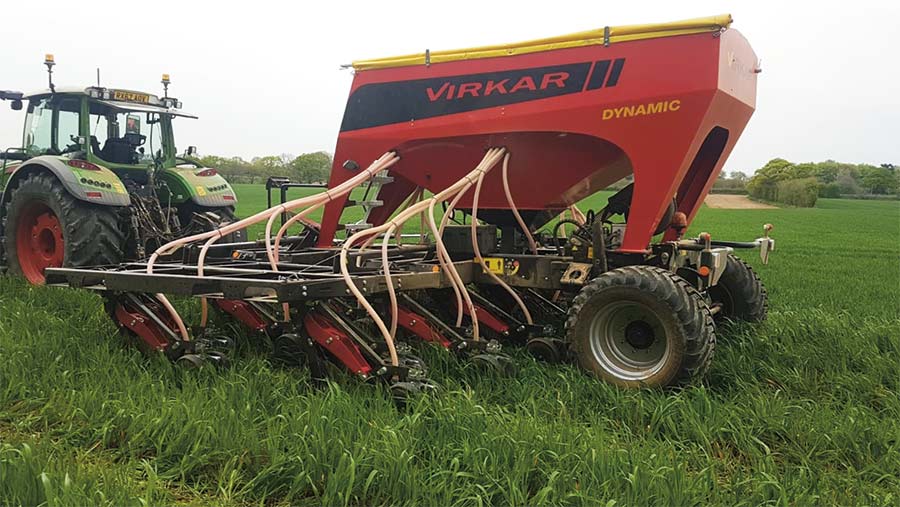 The discs ride on hydraulic rams linked to a central accumulator that provide up to 280kg of downward pressure on each coulter.

A sprung linkage allows the disc to lift over immoveable rocks by up to 35cm and means that the more the disc goes into the ground, the greater the pressure exerted on the press wheels.

Getting (and keeping) direct drills in baked-hard ground can be a problem, so Virkar offers the option of fitting wafer weights on the drawbar to add to the 6.5t empty weight.

This could prove handy when sowing small-seeded, lightweight crops such as oilseed rape.

Operators can tinker with the working depth of the disc in relation to the boot, pushing it up to 2.5cm deeper to make sure the seed is dropped onto, and covered by, loose soil.

As well as dropping the seed, the tine and seeding boot elements fulfil a second role in cleaning the slot behind the disc, which significantly reduces the risk of hairpinning, says Mr Berry.

The company offers a couple of tip options for the tine, with choice predominantly determined by ground conditions.

A simple, straight-legged design should usually be adequate, but there’s also one with an angled point that will help keep it in the ground when the going is dry.

Because the legs do minimal work in forming the slot, they are subjected to little wear and should be good for thousands of acres.

It also means required pulling power is fairly modest – Mr Berry uses his Fendt 724, but reckons buyers could get away with just 180hp on the 6m model.

Optimum travel speed is about 8kph to minimise soil throw that would otherwise leave a more open, vulnerable slot, though those working on min-tilled ground could push it closer to 12kph.

Seeding depth is set on pairs of V-angled press rollers that can be adjusted by an uncomplicated clip system to make sure loose soil is pushed back over the seed.

Contractors, or those working across variable soil types, might consider investing in both to add a bit more flexibility to the system.

The steel setup adds an extra £2,400, but will prove vital if the concrete-like conditions this spring become more common.

The whole unit is semi-mounted on the tractor, so the chassis rides on a pair of 550/45 R22.5 transport wheels that remain in contact with the ground during work.

This arrangement has the potential to cause unnecessary compaction on cultivated ground, but should have little impact in a zero-till system where the soil tends to be able to handle a bit more weight. 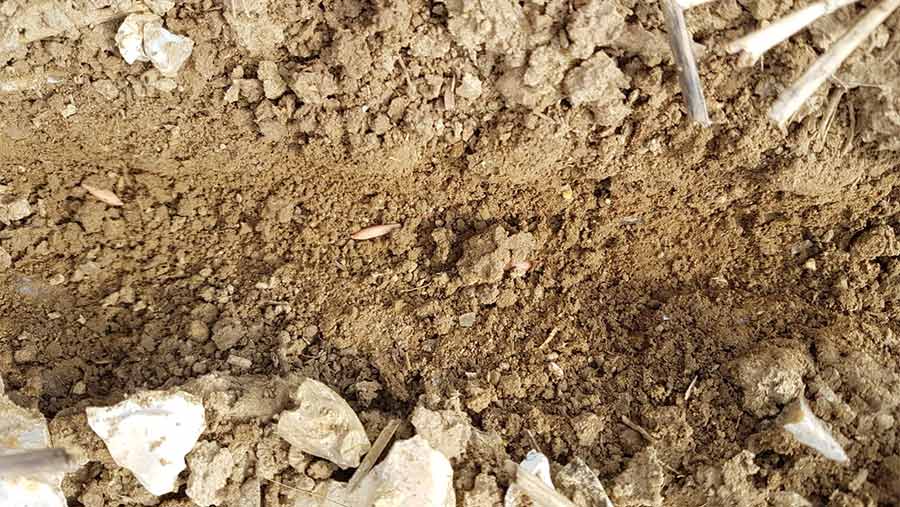 One of Virkar’s neater developments is a steering kit on the rear axle, which remains engaged during work but can be locked for transport.

It uses a potentiometer on the drawbar to dictate their angle and offers vast improvements in bout accuracy on sloped ground.

In particular, the drill should be less prone to cutting corners on curved headlands, shouldn’t crab when working across slopes and the steering system will also reduce side pressures on the coulter arms.

The other benefit, of course, is tight turning, so swinging back into work on a 12m headland shouldn’t pose much of a problem.

Another stand-out feature is the flexibility to alter row width and full working.

Because the 4.5m and 6m versions use the same chassis, owners can simply bolt extra frames on the wings and fit the required coulter modules at a cost of roughly £10,000.

A bit of spanner twizzling can also shift row widths from 19cm to 25cm (or vice versa) by moving the coulter units into different pre-drilled slots on the frame.

And if you’re thinking about sowing oilseed rape at 50cm centres, it’s simply a case of lifting the front row out of work. 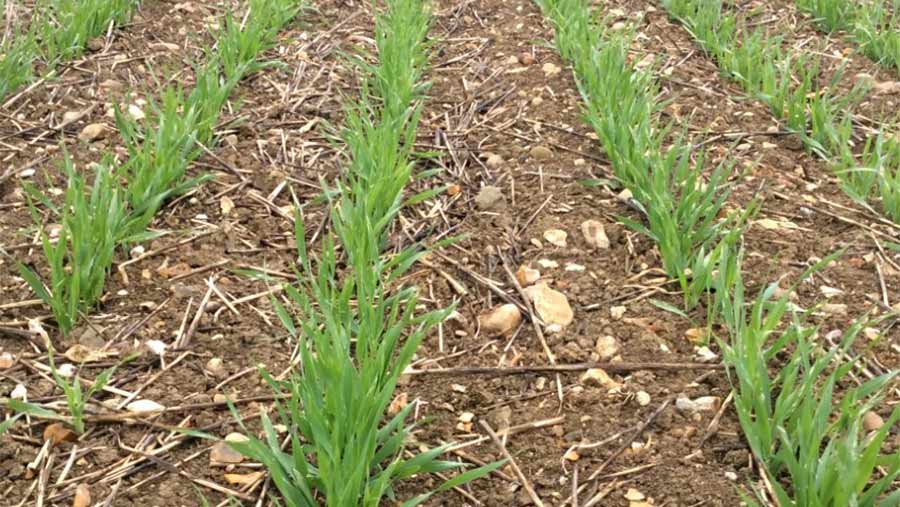 For starters, they say it can handle far trashier conditions, fungicide applications have been cut by as much as 40% and they’re also getting marginally better yields, all of which is reflected in profitability.

The standard outfit carries a 5,300-litre hopper that can be ordered (or retrofitted) with a 65:35 grain and fert arrangement.

There is also the option of a third 600-litre seed-carrying element that can be dropped into the main hopper with a telehandler, where it is clamped in position.

All of the components are made in-house by Virkar, except for the Muller control system. This can be run through the towing tractor’s Isobus-ready terminal, providing sowing rate adjustments from 2-380kg/ha.

The firm is also working on bigger models and expanding its portfolio, first with an 8m version of the Dynamic and later with a disc drill version and direct maize drill.

Virkar’s Dynamic drill will be making its public working demo debut at next month’s Groundswell event.