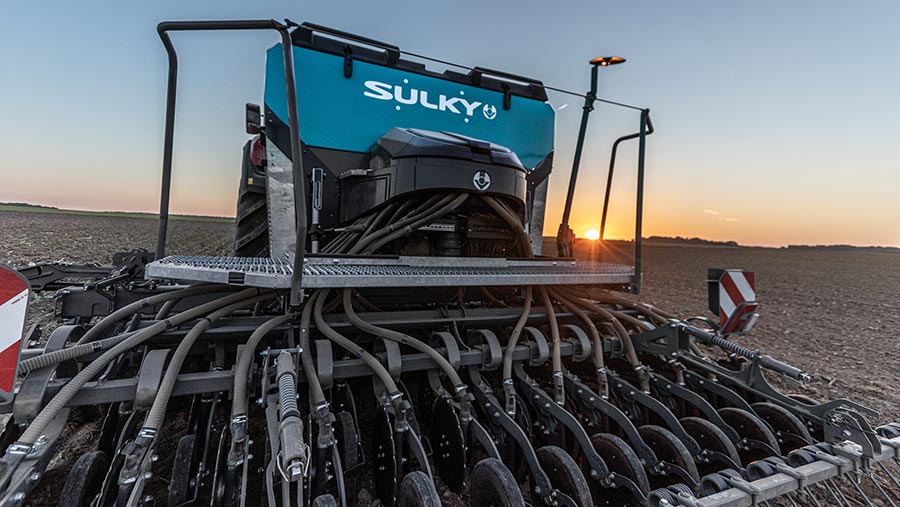 A major revamp of Sulky’s compact combination drill line-up last year culminated in the unveiling of the Progress – a small, high-tech offering that has caught the eye of UK farmers looking to experiment with different applications of seed and fertiliser in one pass.

Its major selling point is the extent to which it can be specced, with options including a triple hopper – ideal for cover crops, companion cropping and fertiliser applications – and the choice of three different coulters offering various levels of down-pressure.

Ian Monson, owner of Oxborough Farms in west Norfolk, took delivery of the UK’s first Progress drill in early March with the aim of evening up the emergence of crops across a range of soil types, including heavy clay, chalks, black fen and blow-away sands.

The business had been running a 6m Weaving Tine Drill, which had given the 400ha unit about 15 years of loyal service despite being subjected to work in all conditions – including well into the depths of winter following root and veg crops.

While its versatility and doggedness at the backend of the season were obvious strengths, like many tine drill designs over the years, depth control and seed placement were crude and resulted in staggered crop emergence. 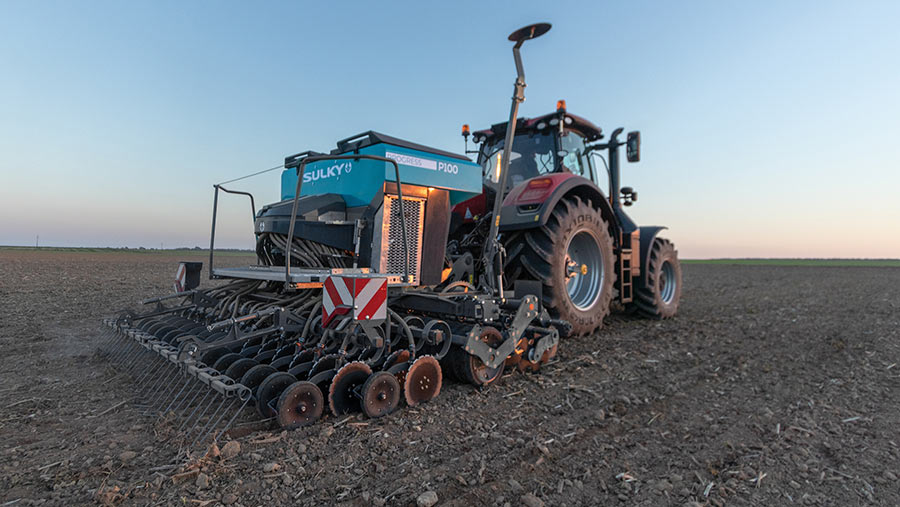 “It was a good drill, but the problem was getting the folding wings working at the same depth as the coulters under the main body.

“The crops always came up, but it wasn’t the tidiest job, so we wanted something with a bit more accuracy,” says Mr Monson.

The farm’s main operator, Martyn Cockerill, had plenty of input into the Weaving’s replacement, and interest in the Sulky system was stirred by a visit to a friend just across the county border near March.

He was running a Xeos Pro – the predecessor of the Progress – which was available with the same three coulter options that feature on the new machine.

These include the Suffolk-type P20, which offers 20kg of pressure and is popular in parts of the continent where horsepower is a limiting factor.

The other two options are both disc-based coulters, with the Twindisc P50 offering 50kg of pressure and the Cultidisc P100 applying 100kg.

The latter is expected to be the choice for 95% of UK customers and is the option that impressed Mr Cockerill when he saw it working in marginal heavy clay conditions in Cambridgeshire, covering all the seed without bunging up.

The Progress is available in 3m, 3.5m and 4m versions, with either a Sulky power-harrow or Cultiline XR disc tool, which comprises two rows of notched discs. Both the power-harrow and XR come with a choice of packer rollers.

These include the standard type for any conditions, the Tracker, which has rubber ribs that consolidate soil ahead of the coulters to give them something to bite into, and the Gravity – the heaviest offering ideal for flinty ground.

Despite the farm having a range of soils, including heavy clay, most of the land is medium to light, so its new Progress was specced with the XR disc tool instead of the power harrow option.

This means the choice of a narrower, lower output 3m machine is slightly offset by the ability to increase forward speed to 12kph or above. 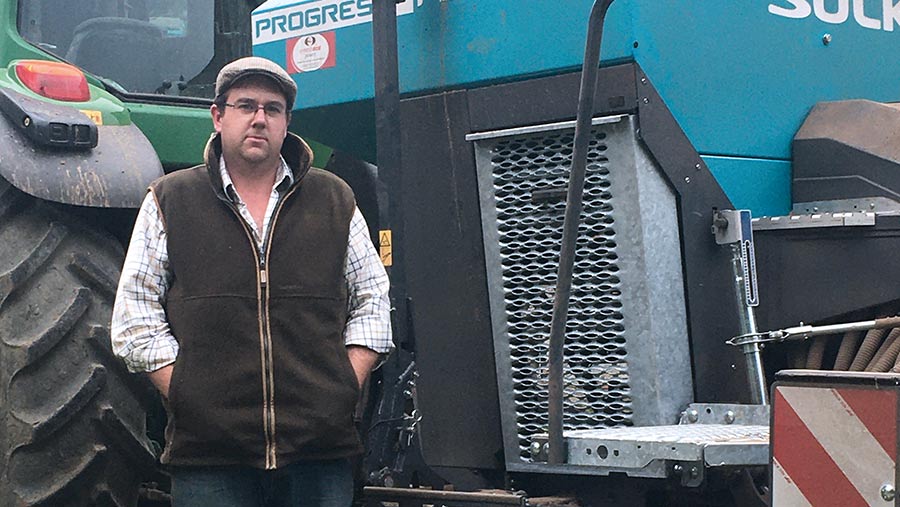 Mr Cockerill says that from an operator’s point of view it effectively makes the Progress a mounted Vaderstad Rapid, which has been one of the most popular seed drills in the UK since the early 1990s.

However, unlike a Vaderstad Rapid, which is often brought to a halt in wetter conditions, the Progress allows him to drop the disc tool off the front and replace it with a power-harrow if necessary.

“It means it isn’t a one-trick pony and that was one of the selling points for us,” explains Mr Cockerill.

Mr Cockerill says the drill did an excellent job on a range of soil types last spring, including some spring barley on the heaviest land under the farm’s stewardship, and attributes it to the P100 coulter and press wheel design.

It has also completed about 40ha of oilseed rape drilling this August – a crop where good, early establishment is increasingly important – and the whole area is looking well after welcome rains.

“I’ve drilled into many varied seed-beds, whether light or heavy, ploughed or min-tilled, and it has proven itself capable in all of them.

“With the tine drill we’d sometimes be waiting a few days for it all to come up.

“That can impact the timing of pre- or peri-emergence herbicides, but the Progress has been very even and will make life a lot easier in that regard,” he explains.

The farm opted for the single hopper, which doesn’t take advantage of one of the machine’s big selling points (see “Progress hopper options”), but Mr Cockerill has been impressed by its design, nevertheless.

A rejig from the Xeos sees the distribution head sitting above the coulters, rather than at the front of the drill, which results in less seed running out of the coulters when it is lifted for headland turns.

He says the drill’s control unit and calibration process is simple, making it extremely user friendly when switching crops or seed lots.

“We are able to run it through the tractor Isobus or an iPad app, but at the moment we are sticking with Sulky’s Quartz 800 touchscreen, which is easy to use.”

The drill is also geared up for variable-rate drilling and electronic individual coulter control, which is a useful feature when using funky row widths or for contractors working across different farms with a range of sprayer and tyre sizes.

Although Mr Cockerill is currently not using these features, any future tractor upgrade to one equipped with GPS will see the drill’s technology adopted in the near future to improve efficiency.

Mr Cockerill has had two issues with the drill so far, including a quirk in its automatic tramlining system, which would cause confusion when working around obstacles such as trees and telegraph poles.

After explaining the issue to Sulky in France, it was quickly rectified by its engineers, who reprogrammed Mr Cockerill’s in-cab box so that it allowed manual control like any other drill.

The second was the sole option of wheel track eradicator discs with the XR disc tool version.

“We would prefer a tine arrangement and will make and fit our own before drilling cereals this autumn,” he adds.

Sulky’s new Progress drill offers users of compact combination drills the option of between one and three separate hoppers, straight out the factory.

With Sky direct drills made in Sulky’s two French factories, the firm has been able to draw on Sky’s experience in the no-till market, where customers are placing multiple seeds and fertiliser products in one pass.

These could include a mix of cover crop species, companion crops, a combination of seed and fertiliser, variety blends that are gaining popularity in France, or even slug pellets with seed.

The company’s UK managing director, Rob Thurkettle, says the multi hopper option is aimed at forward-thinking farmers in a plough-based system that want to experiment with some of the techniques associated with direct drilling and conservation ag.

A single hopper version can be ordered with 1,250-litre or 1,750-litre capacity.

Finally, the three-hopper machine has a 1,200/800/100-litre split for maximum flexibility.