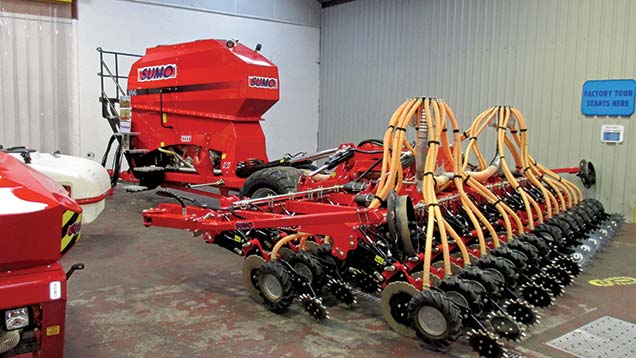 Its DD direct drill has a 3,600-litre hopper with seeding elements at the back and the ability to fold horizontally for transport. The hopper is a 50:50 split unit and grain and fertiliser are metered using the Orga system.

Seeding units are mounted on a parallelogram linkage, which allows for contour following. A single 450mm disc, set at an angle of 5deg, opens up a seed trench, with seed or fertiliser placed towards the rear of the disc.

A following spiked wheel then breaks the trench wall and covers the seed with soil. Row spacing on the machine is 200mm and it has the ability to drill down to 100mm. Coulter design yet to be finalised.
Sumo’s new front hopper, meanwhile, can handle more than 1t of fertiliser or seed.

Metering is done by Sumo’s Orga metering system and variable rate is possible with Artemis control. Ground speed radar and road lighting kit are standard and a hydraulic motor drives the fan.

The front-mounted hopper will be launched at Lamma 2015.