There are a good few changes for this year’s Ultimate Guide to direct drills that use tine coulters to establish crops straight into stubbles.

McConnel has dropped out of the fray after discontinuing the Seedaerater and Simtech Aitchison has let its 6m and 7m trailed models fall by the wayside to concentrate on a sizeable selection of mounted machines for grassland and arable crop establishment.

But newcomers more than make up for those losses, not least the all-new iZona iPass, another direct tine drill from the same engineering stable as the Mzuri Pro-Til range of mounted and trailed seeders. 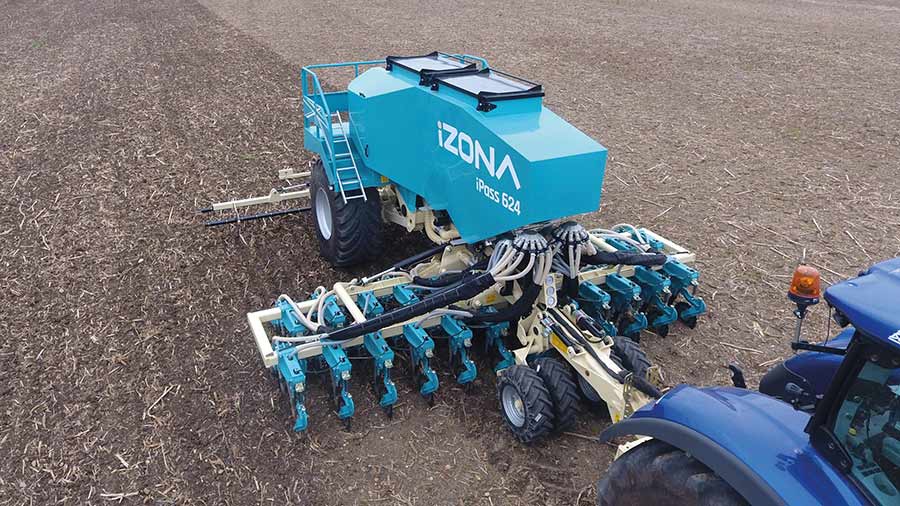 A 7,000-litre hopper and working speeds up to 8kph point to high outputs from the new iPass seed drill © iZona

Given its 7,000-litre seed and fertiliser hopper, the iPass is inevitably a trailed machine only; it runs on a commercial trailer axle carrying large-diameter 800mm- or 900mm-wide implement tyres.

The distinctive new contender is available with interchangeable tine coulters for sowing into a prepared seed-bed, a minimum tillage mulch or direct into stubble, with strip cultivation drilling likely to be a further option.

Leading discs and auto-reset-protected tines are designed to cut through trash and create a targeted strip of tilth ahead of coulter tines that are mounted on parallel linkages with ball joints allowing them to self-steer through curves.

With sufficient capacity to sow 16ha with each fill at 180kg/ha and working speeds of up to 18kph, the iPass is clearly designed for high outputs.

Then there is the new “C” version of the trailed Virkar Dynamic, which lacks the current DC machine’s trash-cutting discs to create a slightly simpler, lower-priced drill.

Available in 4.5m, 5m, 6m and 7m sizes sporting two staggered rows of coulter tines, both variants get a larger 6,800-litre hopper option as an alternative to the 5,300-litre size for added output.

The new Tandem version of the Farmet Falcon Pro is a similar newcomer, albeit with rigid coil-spring protected tines arranged in three separate rows across a frame suspended beneath the hopper on a parallel linkage.

Stable depth control is provided by a row of packer tyres up front, plus a larger set behind the tines that are also used for transport.

Elsewhere, KRM has added a rigid 4.8m Soladrill to its line-up and Claydon’s Hybrid range now includes a 4m rigid model available in both seed-only and seed/fertiliser variants. 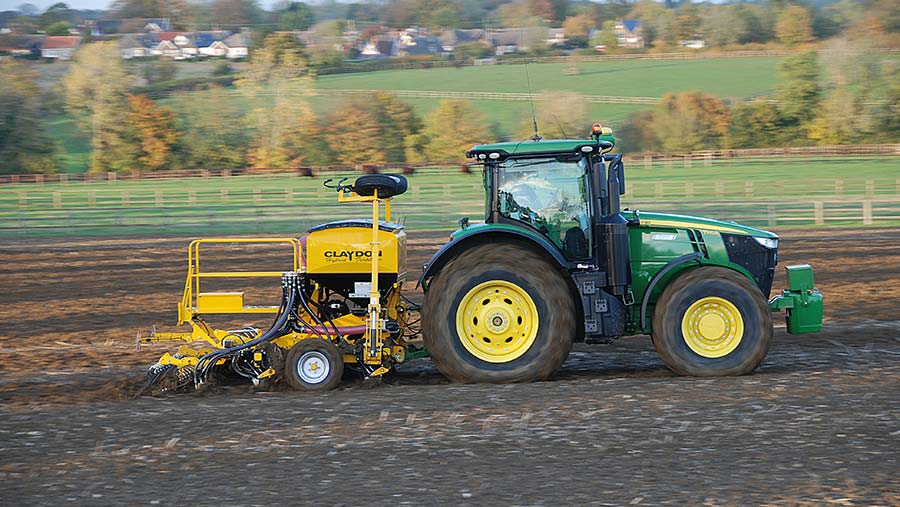 Weaving Machinery, meanwhile, has developed front tank versions of the tractor-mounted Sabre tined seed drill for more even weight distribution than when everything is concentrated at the back.