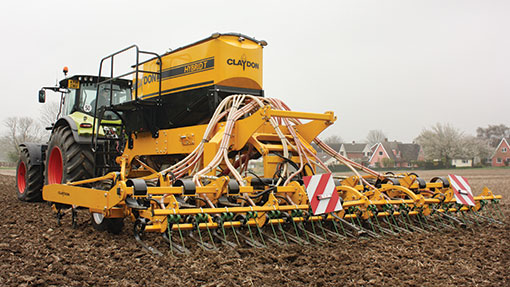 Suffolk drill, harrow and roll maker Claydon has moved into the direct drill big league, with 6m and 8m trailed Hybrid models that give the sort of daily workrate demanded by an increasing number of UK and European farmers.

This means the firm can offer mounted drills from 3-6m and trailed ones from 6-8m.

The direct drill seeding system is the same as on the company’s smaller machines. The difference is that the new models hold 5,500 litres (about 4t) of seed and a removable plate allows you to use it grain-only or as a 60:40 split.

An easy-rollover top allows quick fill-ups, says Oliver Claydon, and the weight is spread between the tractor and the drill’s own transport wheels.

It means that 60ha can be drilled in a day with just two fill-ups. That’s important for many farmers in central and Eastern Europe, he adds, where 400ha fields are common.

A lot of effort has been put into making it stable when on the road – a series of hooks drop over beefy pins and four trailing bars keep it rigid.

The hopper and frame are separate so seeding remains constant. Having the wheels run on uncultivated soil also helps maintain an even seeding depth.

Night work is helped by the presence of four cameras/lights – two in the tanks, one underneath the chassis and one looking out the back.

The official launch of the new drills is at this year’s Cereals event. Eight machines will be available for this autumn, with production ramping up for next year.

Claydon has come a long way since it launched its first V-drill in 2002. In fact it has evolved from a specialist drill maker mainly manufacturing for the eastern counties of the UK to being a fully fledged European brand. It has also managed to gear up to offer a full drill/harrow/roll package.

Several hundred drills and straw harrows have been sold over the past five years, and turnover has doubled in each of the past four.

The firm’s geographical coverage has steadily expanded from East Anglia to western counties, then to Scotland, Ireland and both western and eastern Europe.

The really striking thing is the increase in number of foreign farmers buying the drills. In 2011, virtually no Claydon drills were sold outside of the UK; by February of this year, foreign growers were taking as many drills as UK buyers.

One reason for its success is that European farmers in particular like the fact Claydon has been farming in its own right from the start (it has 400ha of fairly stiff land) as well as being a respected machinery manufacturer.

“I think one of the key things is that customers from abroad know we are farmers as well as manufacturers,” says Jeff Claydon. “They like to come and see our fields and how the crops are getting on. We get hundreds of existing and potential customers every year.”

The company’s drills are now sold to 26 countries and it reckons that by 2015 70% of its drill output will go abroad. New production facilities have already been built to meet the demand and another 6,000sq m of production is waiting to get planning permission.

The success of the drills has been mirrored by straw harrow sales, with several hundred sold in the three years they have been available. These are a key part of the Claydon system as they give a quick way of stirring up the clumps of straw where slug eggs tend to gather.