Koeckerling’s biggest Allrounder cultivator comes with a rather shocking £90,000 price tag, but its ability to form a decent seed-bed and eat thousands of acres means it has already justified the expense for a Hertfordshire farming company.

Rand Brothers manages more than 3,000ha comprising owned, rented and contract farmed land and, like others across the country, has switched to min-till in a bid to trim establishment costs. 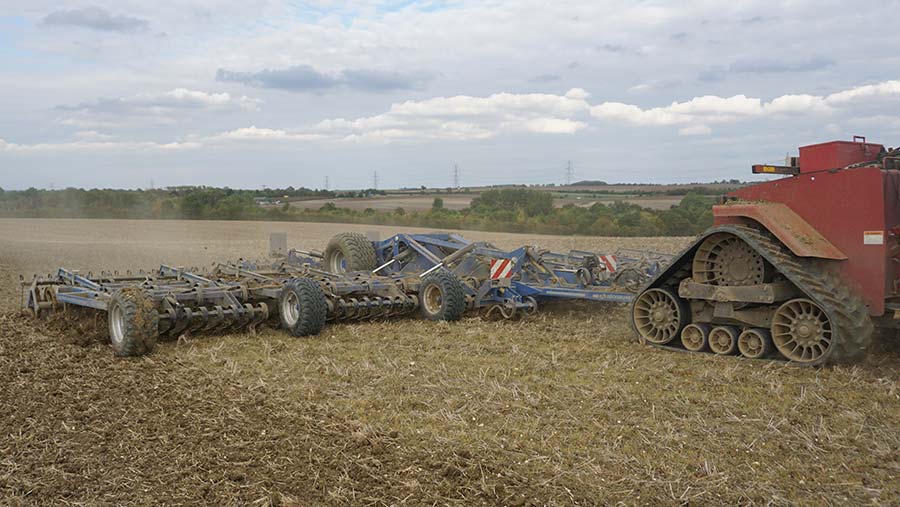 The previous cultivation regime was based on a Gregoire Besson Discordon, but farm manager James Bairstow decided it was time to increase output and improve versatility.

“The old system was fuel hungry, slow and had high rates of wearing parts – not only on the cultivator, but in the tractor’s gearboxes.

“We needed a machine that would go shallower and faster, yet not give up at the first sight of tough clay patches.

The old disc system would often ride over the rough patches and fail to provide a good chit,” says Mr Bairstow. 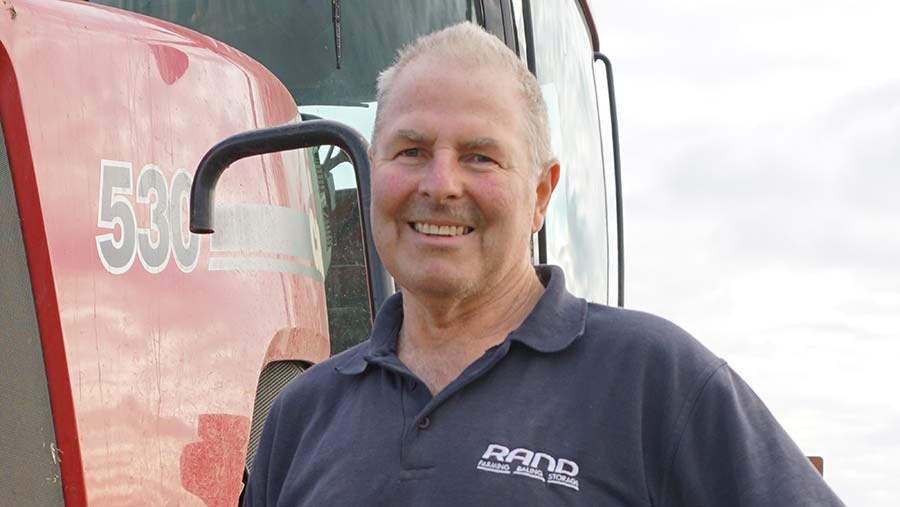 “With blackgrass, we’ are looking for 97% control, so even a few missed areas can end up costing us dearly. We want a more intelligent approach, which also means working deeper across patches of compacted land.”

After a bit of shopping around, the Allrounder arrived in April to catch the tail end of sugar beet preparation and has since completed a heavy autumn workload.

“We used to move huge quantities of soil, but now we want to move as little as possible – often just the top 10-15cm,” says Mr Bairstow.

“Output is pretty impressive – when chitting to a depth of 10cm we can cover up to 16ha/hour – and it does a good job of loosening the soil.

The depth of the two outside sections is set using the wheels and, for the central section, it will do a couple of rounds to calibrate and then lock the hydraulic valves.”

Grunt is supplied by an 11-year-old Quadtrac 530 – an early import from the USA – and the move to a lighter cultivation regime has allowed Rand Brothers to keep the machine on for longer than planned. 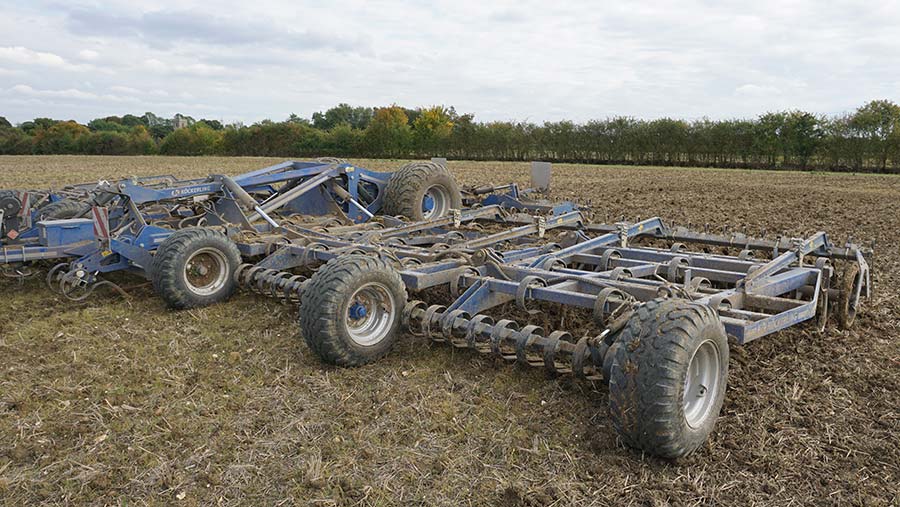 It drinks about 80 litres/hour and high working speeds of up to 15kph help break up the clods as it works across a range of soil types, from powdery chalk land near Royston to heavy river valley clays nearer Cambridge.

The high clearance and tine spacing means the machine almost never gets clogged up, either.

The cultivator comes in fives sizes from 6m to 14.5m wide and ranges in price from £30,210 to £81,590 for a basic machine with standard points, hydraulic brakes, lights and a KAT linkage. Options include levelling boards and rear tines.

Although Koeckerling has been producing the Allrounder for almost 10 years, it’s the first time that the widest 1450 model has been sold in the UK – a long way from its natural home in the monster fields of eastern Europe.

Rand Brothers’s version has a set of flat-faced levelling tines at the front – an option taken up by almost all of the machines sold in the UK. 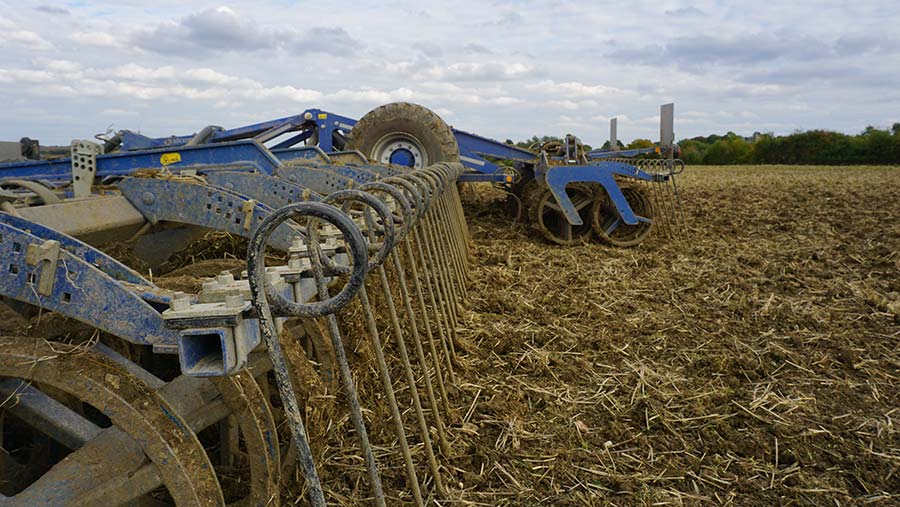 The 86 tines are set across four rows spaced at 16.6cm and are fitted with 60mm tungsten points. Consolidation is achieved by two rows of rimmed STS press wheels with a diameter of 530mm that also work to manage the working depth, and at the back is a set of 13mm diameter pigtail tines.

Other details to note include an underframe clearance of 60cm and total weight of 12t, all carried on a set of 600/55 R22.5 tyres.

On lighter land, Rand Brothers uses the cultivator on stubble to encourage weed seeds to chit and then makes a second pass before drilling.

“It leaves a good finish and all the soil stays within the frame of the machine, so it doesn’t leave ridges either side,”  says Mr Bairstow. 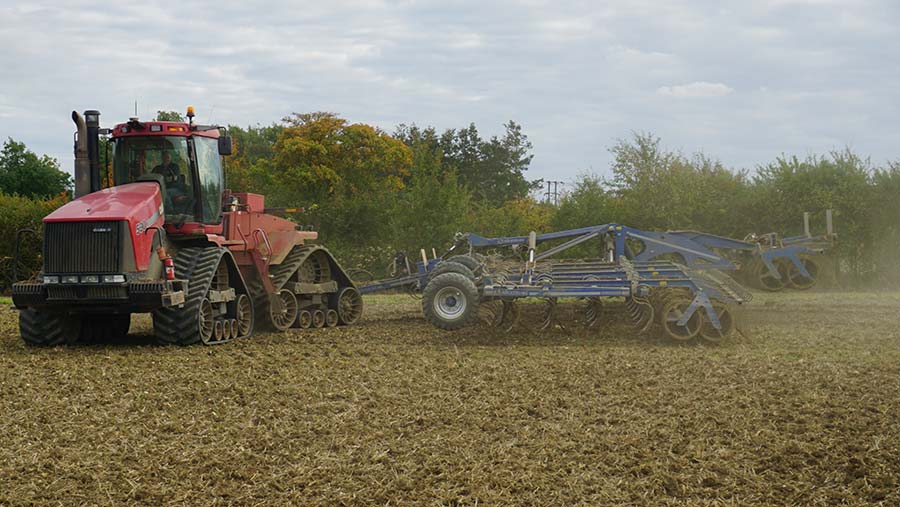 On heavier land a 7.5m-wide Koeckerling Vario carrying 57 individual 100mm tines is run at a depth of 18cm and is followed by the Allrounder a couple of weeks later.

Minimising soil compaction points towards early-season land work, but the countervailing pressure is to give blackgrass as long as possible to germinate.

This pressure towards the end of autumn has forced Rand Brothers to increase its drilling capacity – the company now runs three 8m Vaderstad Rapids.

The plough also comes out after oat crops – where it is followed by a pass with the Allrounder – and for sugar beet land that has been left over winter. Beet acreages have increased significantly due to difficulties of establishing OSR and the attraction of the new British Sugar contract.

Rand Brothers isn’t afraid to invest in frontline kit. A pair of Claas Lexion 770 combines with 35ft headers is served by a chaser bin loading into a fleet of articulated and rigid DAF lorries, and a mixed fleet of sprayers is headed by a Horsch Leeb PT 280.

“We feel it is important to offer a range of machinery to suit different conditions and demands of customers. The Allrounder’s versatility fits into our system well, but we still use the plough and have also invested in a John Deere 750A direct drill, which  gives us options at either end of the tillage spectrum,” says Mr Bairstow.