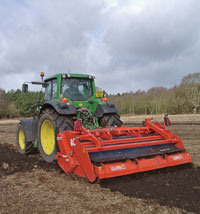 Spading machines and rotavators have done the rounds over the years, but have never really taken off as mainstream cultivation tools. A couple of years ago, however, machines that combined the two concepts started to appear from Holland.

First off was the Imants rotary spader and more recently Farmax units brought into the UK by Richard Larrington.

Both companies say these machines do the work of a plough and secondary cultivator in one, so have the potential as one-pass tillage tools. For Nottinghamshire contractor George Roworth, the concept has paid off in a slightly different application.

He and his brother Henry first spotted the Farmax “rotary plough” at the LAMMA show last year. Taken with the idea, they trialled it with various customers last spring, using it to incorporate the thick layers of straw used to insulate carrot crops from winter frosts.

This is a much more difficult task than simply mixing the crop residue left behind by a combine because of the sheer quantity on the ground. Straw for covering carrots is spread at a rate of 40 Hesston bales an acre compared to a typical four bales an acre coming out the back of a combine.

So getting down through the thick mat of straw is a challenge, and usually takes a pass from a deep-leg soil loosener such as a Bomford Superflow, followed by three or four passes from a rotavator.

“We had been doing the autumn spreading job for a number of years and every year watched in the spring as our customers struggled to incorporate the straw,” says George. “It seemed like such an inefficient system and I was convinced we could improve it.”

By buying the rotary tiller, the Roworth brothers hoped to slash the costs of straw incorporation and offer their customers the complete service from spreading right through to seed-bed preparation. 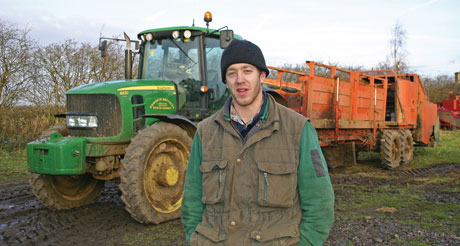 George Roworth says there is still some ploughing involved, but it makes it easy work

The problem is that carrots are generally lifted through the winter when the soil can be at its wettest. Consequently, trailers and harvesting rigs have a tendency to leave deep ruts which makes it difficult to return the ground – which is usually rented land – to a decently level finish. By running the Farmax at a slight angle to the ruts they are easily eliminated.

This is critical because landowners are often champing at the bit to get a spring crop in the ground after the carrots. To do so, most plough down to about 12in after the straw has been mixed in to bring up a fresh layer of soil from below the heavily strawed surface.

“It’s not a complete one-pass operation because there is still some ploughing involved, but it makes it easy work,” says George.

“By knocking out the Superflow pass and three swipes from the rotavator we’re offering a big saving to our growers.”

This is especially important because it is down to the customers to supply the diesel, so they stand to benefit doubly with reduced fuel and contractor bills.

“Three passes with the rotavator costs about £90/acre. Add in the cultivator and it takes the total to over £100/acre,” he says. “One pass with the Farmax is about 60% of the cost.”

While rotavating will use about 40 litres/hour, the firm’s 200hp John Deere 7920 and 180hp 7530 consume between 27 and 30 litres/hour with the Farmax machine. Multiply that up to two or three passes and it comes to a total saving of between £20 and £30/hour in diesel alone.

But wearing metal usage has been high this year. With the rotor running at 72rpm at forward speeds of 3-4kph, a set of wing-points lasts just 40ha (100 acres) in the sandy soils that carrots tend to be grown on.

Because the legs and points are one-piece items, renewing them all costs between £2000 and £3000 a time. Knock-on digger-bucket teeth provided the answer at a cost of just £360. They have considerably extended the life of the legs. “Our next step is to find replaceable wings,” says George.