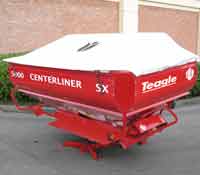 Truro firm Teagle (01872 560592 www.teagle.co.uk) has moved into cultivation and larger fertiliser spreaders for the first time with the news that it is to bring in several pieces of well-known machinery from Dutch firm Tulip Products.

These include the popular Centerliner twin-rotor fertiliser spreader, orginally made by Lely, but sold to Peeters Agricultural Machinery (which makes Tulip products) in 2002. Machines with capacities from three to five bags will be offered and prices start at £4765 for a 1900-litre capacity SX3000 model. Bout widths are adjustable from 6m to 36m.

Teagle does already make its own smaller spreaders for livestock and smaller arable farmers, but the Centerliner gives it a strong presence in the mainstream spreader market, says marketing director Geoff Osborne.

Teagle will also offer the Roterra power harrow, also sold to Tulip by Lely in 2002. Teagle will offer 3-6m versions with prices starting at £8475 for a 3m model. Optional extras like packer rolls, levelling boards and linkages for mounting drills on top will also be offered.

Other products from Tulip being sold by Teagle include the ex-Lely Polymat pneumatic drill, which is available in 3m and 4m working widths and can be fitted to the Roterra to give a good combi unit. There’s also a range of 2-6m wide disc harrows.

A Centerliner (and maybe a Roterra) will be at the Cereals Event next week.