If you thought the UK plough market was limited to a handful of well-known brands, think again. We suss out six-furrow offerings from 11 makers.

For an implement that took such a kicking during the rise in min-till cultivation, it’s impressive that there are still almost a dozen plough-makers selling in the UK.

Now that the technique is back in vogue, these manufacturers are enjoying a resurgence in sales. But there have been a few casualties and shake-ups along the way.

Austrian maker Vogel & Noot was a recent sufferer, ending production last year and passing its plough designs and factory to Amazone, which had only returned to the plough market itself in 2011.

There’s a new name on the scene, too, in the form of Italian-built Nardi ploughs, now available through importer Amia.

Below we take a quick look at 11 of these makers’ higher-spec six-furrow offerings. We’ve included retail prices to give you a rough idea of cost, but it is important to remember that the final deal will be a good bit keener.

Also, ploughs come with a mind-boggling number of specs and options, which vary considerably between the machines listed. Therefore you’ll need to get a quote to get a truly accurate idea of price. 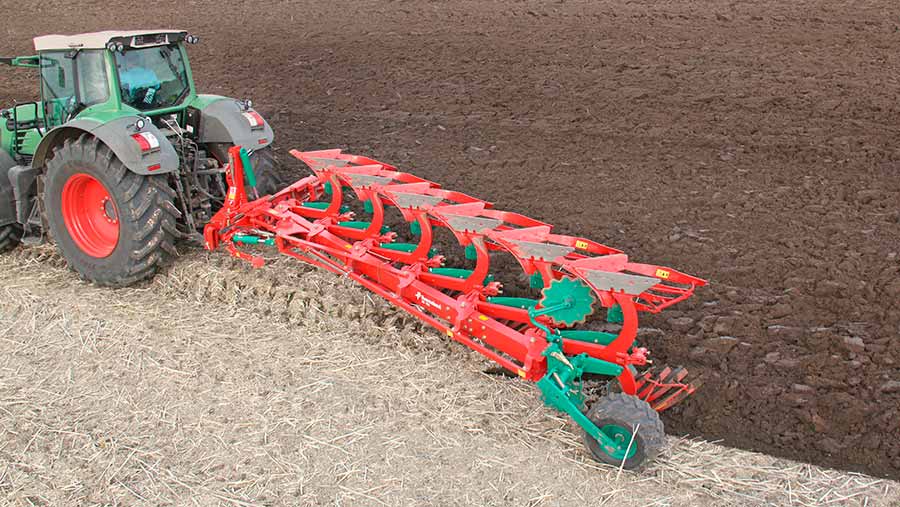 The high spec EG is one of Kverneland’s more popular mounted plough ranges.

It’s available in three- to six-furrow format and comes with full vari-width from 30cm to 52cm with a turnover memory function.

All EG models feature Keverneland’s leaf-spring auto-reset legs, which allow each body to break back over obstacles individually.

Inter-body spacing is either 85cm or 100cm, with under-beam clearance sitting at 70cm, or 75cm with riser blocks fitted. There’s also the option of a 200hp or 300hp headstock.

Common options on five and six-furrow ploughs include number 28 bodies, designed for tyres up to 710mm wide, an 18-inch rear disc and a combi depth wheel.

For those who want a techier alternative, there’s the i-Plough. This has an Isobus system and can adjust furrow width automatically to ensure arrow-straight ploughing every time. 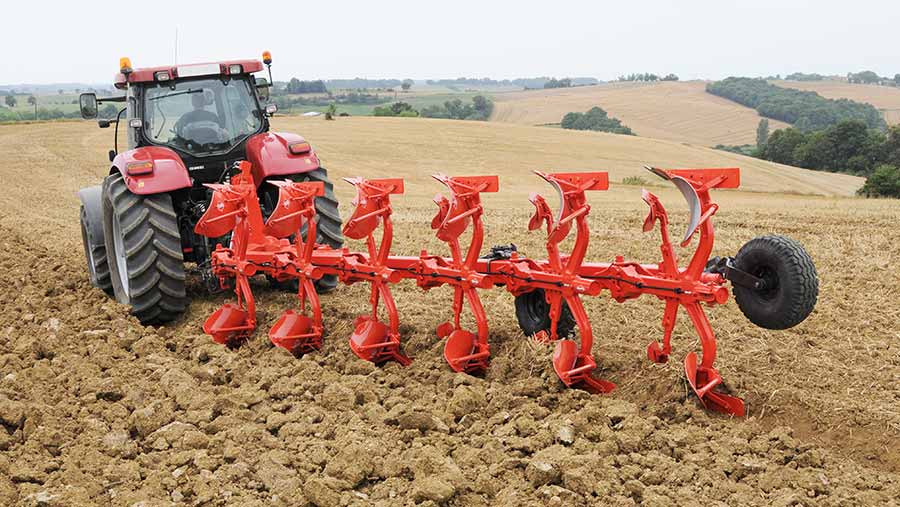 The Varimaster 183 is the flagship in Kuhn’s mounted plough fleet, offering variable width adjustment and the option of auto-reset legs.

There’s the choice of five-, six- or seven-furrow models, all of which have an under-beam clearance of 80cm and a point-to-point measurement of 96cm.

The vari-width system allows working widths to be adjusted from 30cm to 48cm, and it has a memory function for maintaining the width after turning over.

At the front end, Kuhn has fitted its Optidrive headstock that’s rated to 275hp on the five furrow, going up to 330hp on the six furrow and 385hp on the seven furrow.

The headstock also includes a suspension system that’s locked during ploughing, but automatically activates when tuning on the headland.

The Varimaster is available with shearbolt or non-stop hydraulic, auto-reset leg protection. 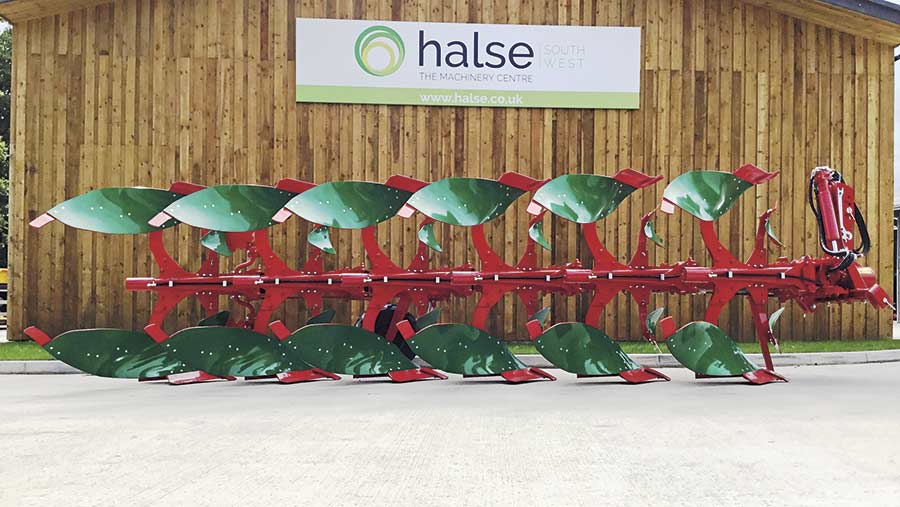 For those in the market for a top-spec, fully mounted reversible, the maker’s HV300 is the one to eye up. This comes in either five- or six-furrow guises and features hydraulic vari-width from 30cm to 51cm, with turnover memory as standard.

Up front, Ovlac has also fitted a self-aligning headstock, which is rated to 300hp on the six-furrow machine. Point-to-point spacing is 95cm, under beam clearance of 78cm and it has a 150mm x150mm main beam.

The popular number 56 mouldboards can accommodate tyres up to 710mm wide, but there are several others on offer including plastic and slatted versions. 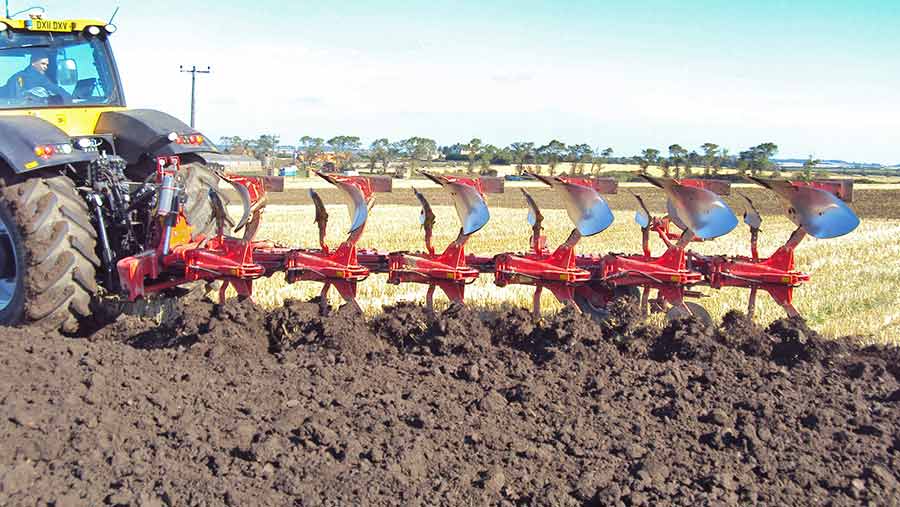 Standard models come with mechanical furrow width adjustment, but there’s the option to upgrade to the maker’s Servo Plus hydraulic vari-width system.

Hydraulic overload protection is also on the options list. The so-called Nova add-on uses a pressure-release system with a gauge on the headstock for setting the break-back point according to the conditions.

Servo 45S ploughs also benefit from traction control, which transfers weight from the plough to the tractor to reduce wheel slip.

The ploughs have a point-to-point spacing of 95cm and under-beam clearance of 80cm. 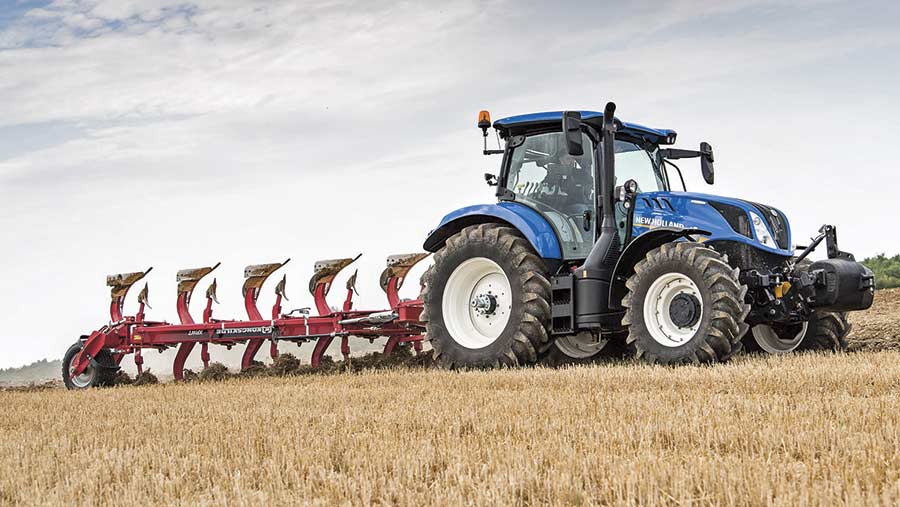 The burliest ploughs in Kongskilde’s mounted range are the XRWS and T models, which can handle up to 300hp on the front.

These come with hydraulic furrow width adjustment from 30cm to 55cm and are available with four to six furrows.

To help the plough turn over smoothly, Kongskilde has fitted a 180mm pivot axle with needle bearings and a double cylinder. One side of the cylinder manages the plough’s automatic alignment, while the other controls furrow width adjustment.

The maker’s XLD bodies are now a popular choice, working at depths of up to 35cm and accommodating tyres up to 710mm wide. 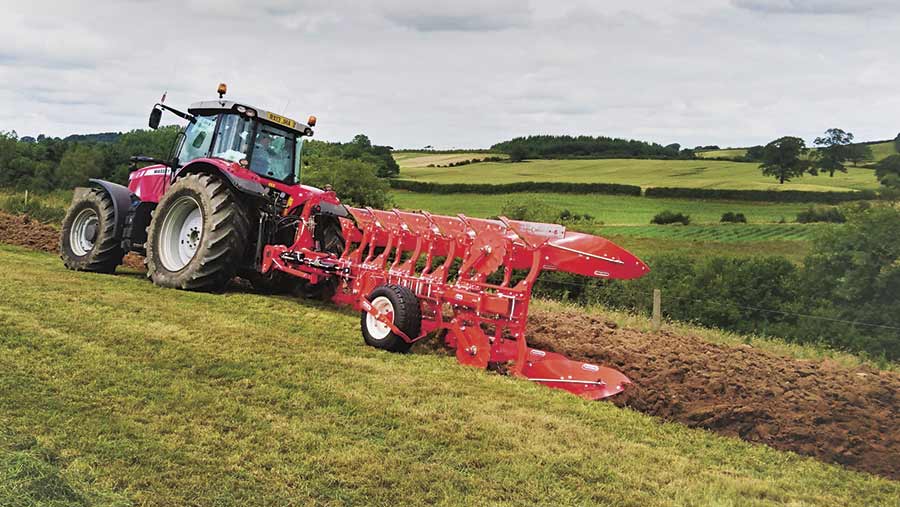 M-spec machines are the simpler of the maker’s two offerings, leaving L-spec for those seeking all the bells and whistles.

These ploughs have a choice of manual or hydraulic width adjustment and shearbolt or hydraulic auto-reset safety system.

Hydraulic plough alignment is standard on four furrows and up, with an automatic memory closing down ram to help smooth the lifting and turnover process. 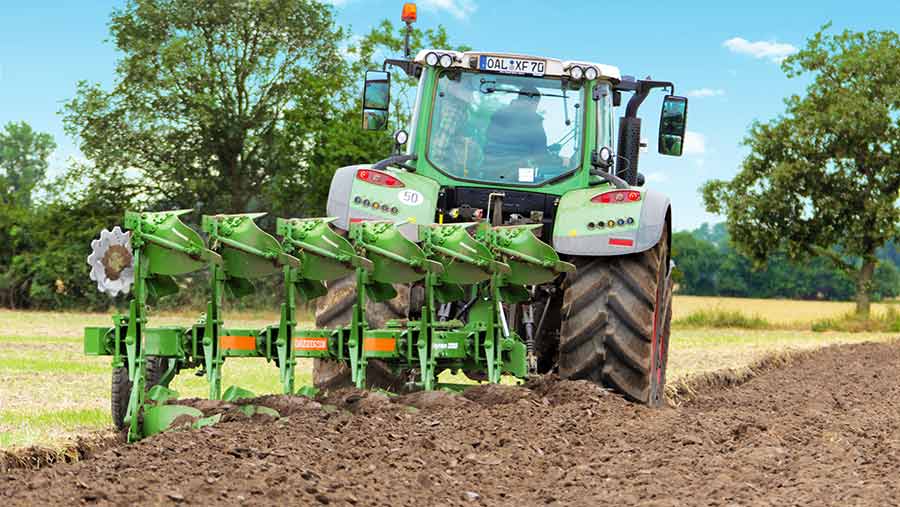 Despite Amazone taking on Vogel & Noot’s plough range, the highest-spec plough in its line-up is its in-house-built Cayron 200.

This mounted reversible plough is available in five and six furrows for tractors of up to 240hp and on manual versions the furrow width is adjustable in three steps from 40 cm to 50 cm.

The Cayron 200V also offers hydraulic furrow width with adjustment from 30cm to 55cm, plus hydraulic front furrow width as standard. Body clearance is 100cm and the main beam sits 83cm above the ground.

The Cayron’s hefty headstock is fitted with a one-piece sprung cross-shaft which helps dampen the plough’s movement when turning on the headland.

Amazone has also fitted the Cayron with a larger front shin to prevent the mouldboard wearing prematurely. 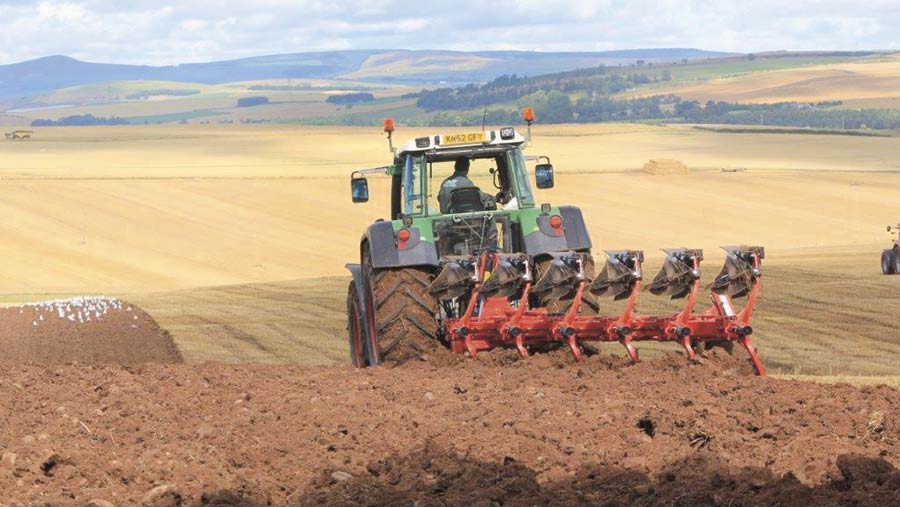 The RW6, RW8 and RW9 are the highest specced mounted reversible ploughs in Gregoire Besson’s line-up.

At the smaller end, the RW6 comes with four or five furrows and copes with tractors up to 210hp, while the RW9 tops out with seven furrows and can handle 340hp or more.

The RW8 sits between the two, comes in five- or six- or seven-furrow format and is designed for tractors with between 160hp and 300hp.

Its headstock shaft diameter is 130mm, the main beam section measures 160mm x 160mm and it has 90cm point-to-point clearance, which can be upgraded to 100cm.

As standard the ploughs come with shearbolt protection, but they can be upgraded to hydraulic auto reset. This adds a ‘Y’ into the ploughs name making it a RWY8.

Guide price: From £31,230 for a shearbolt protected RW8 with rear disc, skimmers and combi depth/transport wheel. Upgrading to a hydraulic auto-reset RWY8 adds £5,960. 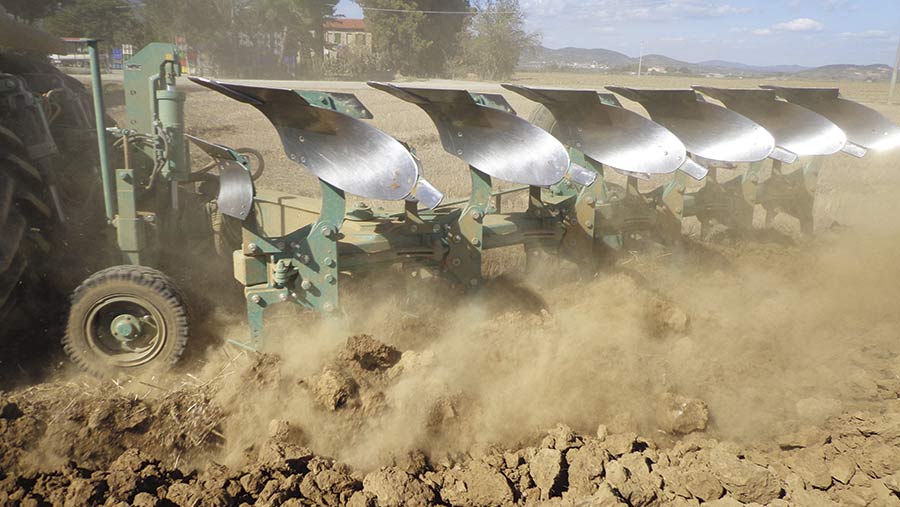 Nardi might be a new name to us Brits, but it’s part of the furniture in its home country of Italy.

The NX35X/6T is the heaviest of the maker’s NX-series ploughs with a 400hp headstock that’s suitable for both in-furrow and on-land ploughing.

This six-furrower has hydraulic width adjustment from 186cm to 318cm and works from 25cm to 35cm deep when fitted with EL6R bodies.

To cope with the strains of deep ploughing – which is popular in its home country – the plough has a reinforced webbed main beam. This measures 160mm x 160mm and can cope with 50cm deep ploughing if fitted with the correct bodies.

Under beam clearance is 82cm, inter-body clearance is 105cm and it tips the scales at 2.98t. It also has the option of shearbolt or hydraulic auto-reset legs. 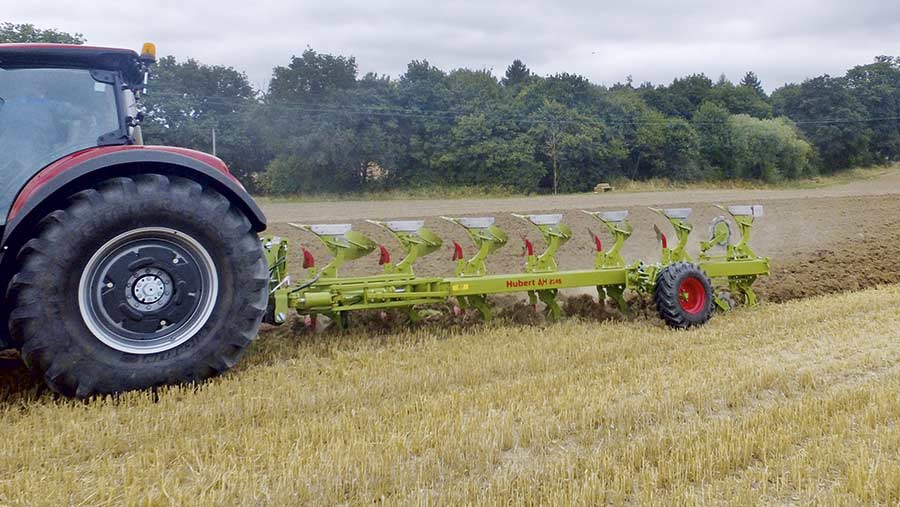 For all the Dowdeswell die-hards out there, Agri-Hire’s range of Hubert ploughs is the obvious starting point for a quote.

Since the Warwickshire maker’s demise in 2015, Tim Hubert has been building a series of similarly specced ploughs that use many Dowdeswell parts.

The Suffolk-built Hubert AH 2141 and 2145 models cover the five- to seven-furrow range, with the 2141 suitable for in-furrow ploughing only and the 2145 able to work on land too.

Point-to-point clearance is 91cm, under-beam clearance is 76cm and furrow widths can be varied from 30cm to 45cm.

Guide price: £27,600 for a six-furrow on-land, in-furrow 2145, which comes with a flange to upgrade to seven furrows if needed. 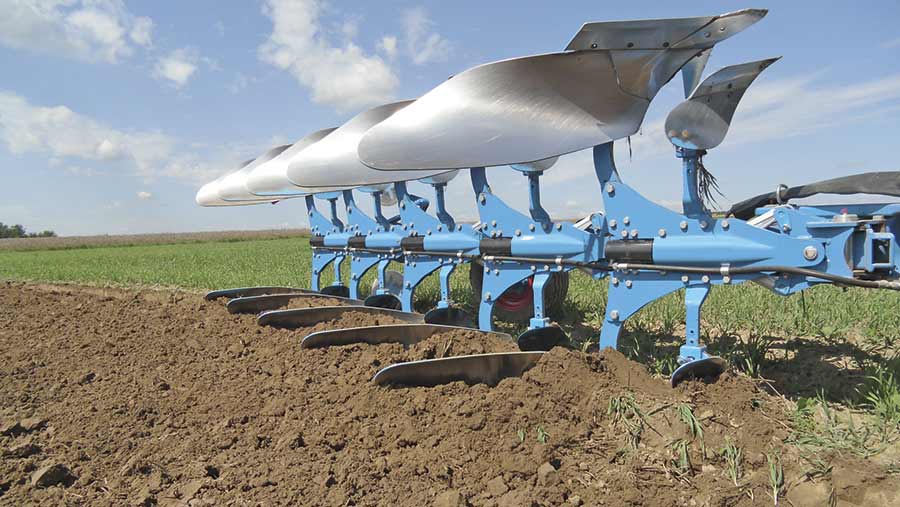 If you really want to push the boat out you can go for a top-spec six-furrow Lemken 8VT L100.

The 8VT line-up is available from three to seven furrows and comes with hydraulic vari-width adjustment as standard, as well as hydraulic auto-reset legs.

Under-frame clearance is 80cm, inter-body spacing is 100cm and the beam measures 140mm x 140mm. The five-plus-one model pictured is suitable for tractors up to 240hp and weighs in at 2,026kg.