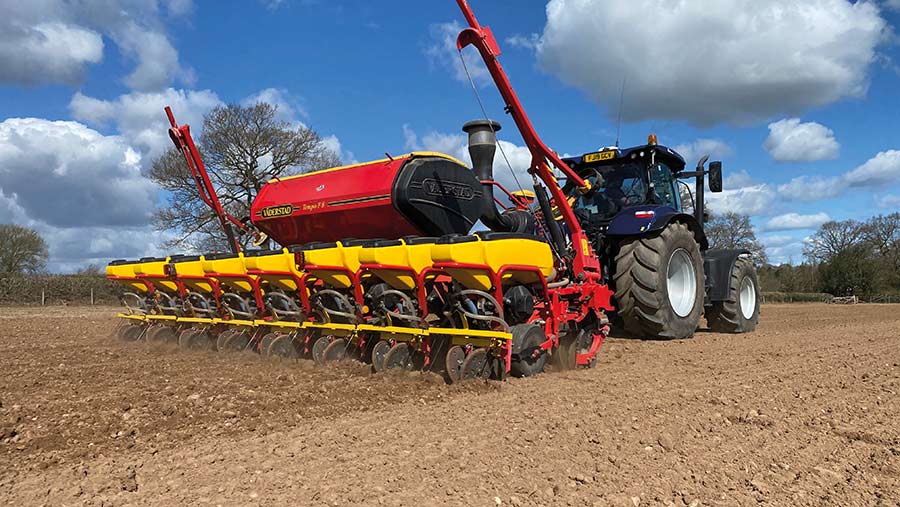 Maize and grass are now common bedfellows, but getting them growing together usually involves making a mid-season drilling pass that risks clattering maize plants and disturbing soil.

Not so for Staffordshire-based farmers and contractors Andrew and Rob Moore.

Together with South Staffs Water and Agrovista, they have come up with a means of getting both in the ground at the same time using a relatively simple combination of off-the-shelf ingredients.

The one-pass system is based on their modified Vaderstad Tempo F8, which has been kitted out with a home-made applicator to spread a fescue mix in bands between the rows.

It means they can get a green cover established without having to invest in an inter-row seeder for a second visit to the field at the four- to eight-leaf stage – provided the farms they work on have no major grassweed problems. 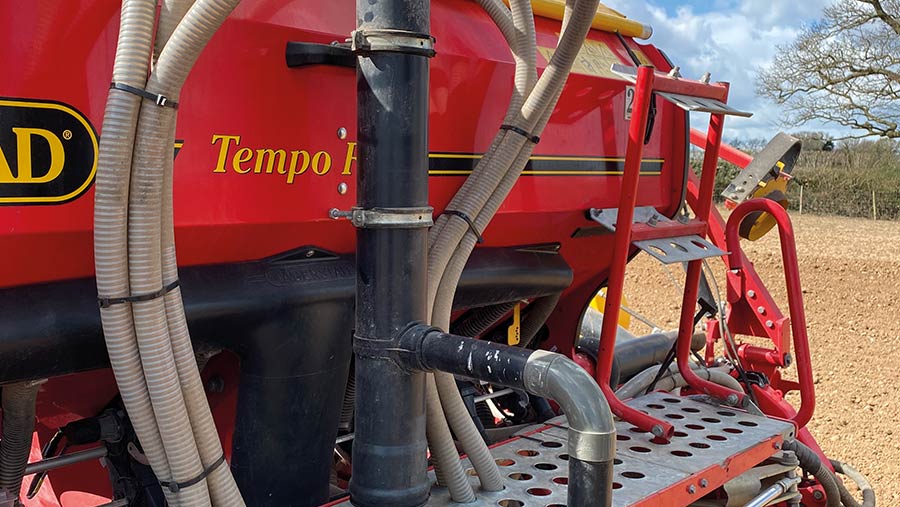 Last year, the Moores, who sow roughly 400ha of maize annually, set about adapting their Vaderstad Tempo F8 to offer grass under maize in one hit and to section-control accuracy.

Conveniently, their eight-row model uses the same fan assembly as a 12-row Tempo, which meant they could siphon off a portion of the airflow to run the grass seed element without harming the drill’s performance.

Working on the basis that the F8’s oversized fan provided 33% excess capacity – and they only needed enough of a breeze to shift lightweight grass seed – they opted for a 30mm-diameter pipe.

This was plumbed in using standard water pipe fittings, with a T-junction on the arterial 120mm air tube that runs parallel to the drawbar and feeds the main system.

It directs wind to an Accord distribution head and then via flexible pipes to the base of each metering unit (one a row).

These are mounted under eight microgranular hoppers, which Vaderstad offers as an option – either from factory or retrofitted.

However, this element wasn’t entirely straightforward, as the husky and dusty nature of fescue seed – the predominant grass species in the mix – caused bridging in the tanks.

To overcome the problem, they worked with a local fabricator to build a batch of electrically powered agitators that encourage the seed to flow.

From the metering system, each pipe splits to distribute seed in bands through 16 steel chutes (two a row).

The pitch and position of the outlets can be tweaked via slotted mounting brackets to make sure grass seed doesn’t stray into the prohibited 150mm zone either side of the maize crop.

Small ridges formed by the angled, slot-closing press wheels of the Tempo’s main seeding unit also help to restrict the spread of seed outside of its target area.

There’s no press-type element on the drill, but the Moores aim to Cambridge roll afterwards, if soil conditions allow, to ensure decent seed-to-soil contact of both maize and grass for fast and even emergence.

Inter-row sowing or undersowing – which to pick? 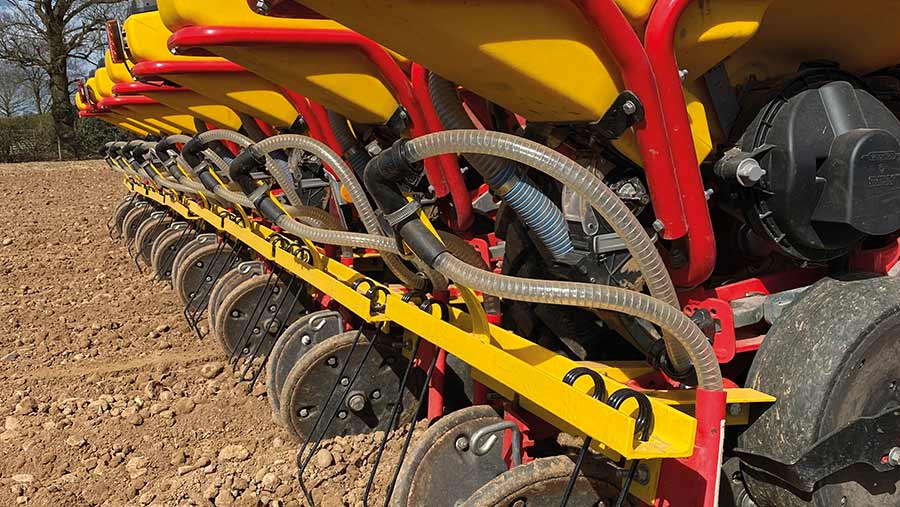 Picking the right grass species and sowing it in the right place are essential to avoid a battle for water and nutrition that will be detrimental to maize performance.

This is particularly true for the Moores’ system, which gives the sward an extra five weeks of root ball development compared with one sown part-way through the season.

“We don’t want the grass to reach above 8in [200mm] and that means avoiding ryegrass – it’s better suited to oversowing where the grass is playing catch-up. It is far too aggressive for our system and will just take over,” says Rob.

Instead, they’ve opted for Agrovista’s Soil Max – a slow-growing, prostrate grass mix made up of tall fescue and advanced tall fescue.

These root deeply, with the channels they form encouraging lazy maize roots to venture further down to access nutrients and moisture – something that has been shown to benefit yield and quality.

“Last year, we sowed grass at 4-5kg/acre [10-12kg/ha] depending on soil type and seed-bed quality, but in good conditions we’re looking to wind that back to 3kg/acre [7kg/ha] – which is at the bottom end of what Agrovista would recommend,” says Rob. 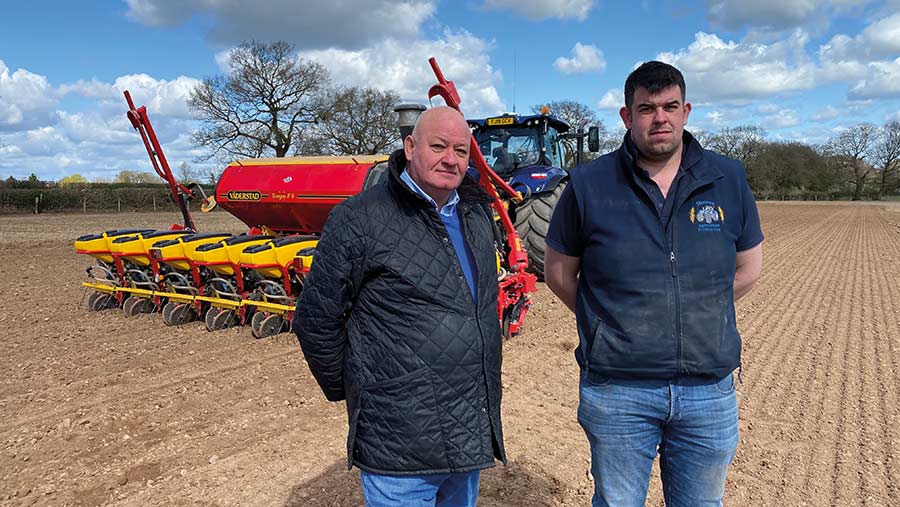 According to Luke Hardy from Agrovista, those costs can quickly be recouped through fertiliser savings on subsequent crops.

Their trials last year showed that grass will capture an average of 40kg/ha of nitrogen – rising to more than 60kg/ha in some instances – which is recycled to the following crop once it has broken down.

However, it’s essential that a 150mm sterile strip is maintained either side of the maize row to minimise competition and ensure there’s enough UV radiation reaching the undersides of the leaves.

Seed-bed quality is also an important factor. Good seed-to-soil contact encourages rapid, even emergence, with the Moores’ favoured approach combining at least one pass with a McConnel Shakeaerator, plus ploughing and power-harrowing.

“We want a fine tilth and the Shakeaerator lifts the wheelings and improves drainage, giving the maize and grass no excuses for getting well rooted,” says Andrew.

Most perennial grassweeds, such as couch and creeping bent, can be dealt with through a glyphosate application prior to drilling, and post-emergence broad-leafed weeds are relatively easily managed, too.

However, sowing grass and maize simultaneously will cause headaches for farmers with severe grassweeds.

Blackgrass, ryegrass and bromes will need several herbicide hits and holding off on grass establishment opens the door to a far most robust range of herbicides.

In this instance, sowing grass at the four- to eight-leaf stage is a safer bet, using an inter-row drill or small seeder combined with a harrow or hoe. 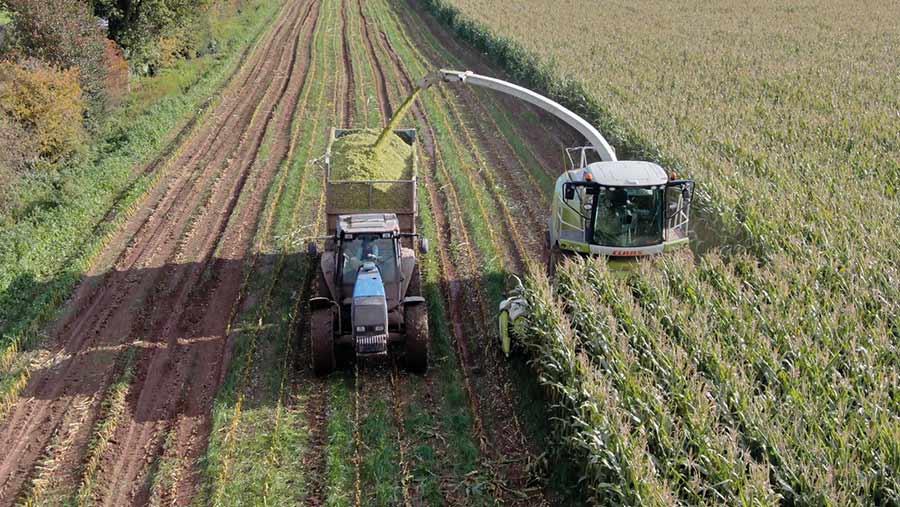 Although South Staffs Water only offers a £150/ha grant to those in its high-risk Blithe water catchment area, neighbouring farmers are also taking an interest.

In particular, it is the ability to travel on the ground at harvest without leaving huge ruts, wrecked soils and mud on the road that is proving most attractive.

“Some growers in the area have had to wait for a hard frost and resort to harvesting their crops with a combine in particularly wet years.

“Avoiding those problems is a massive selling point, and it makes our life easier as a contractor as well,” says Rob.

“One customer also found he was bringing soil into the clamp on the wheels of the trailers during wet years which, in turn, caused mycotoxin contamination in the silage. In that instance, they were more than happy to sacrifice 6in [150mm] of maize stubble at harvest to get a clean crop in the clamp.”

The advantages of growing grass in maize have been well publicised – see Undersowing maize: Trials, tips and all you need to know (also in the 26 March issue of Farmers Weekly) for the results of our trials comparing different methods for establishing it between rows. 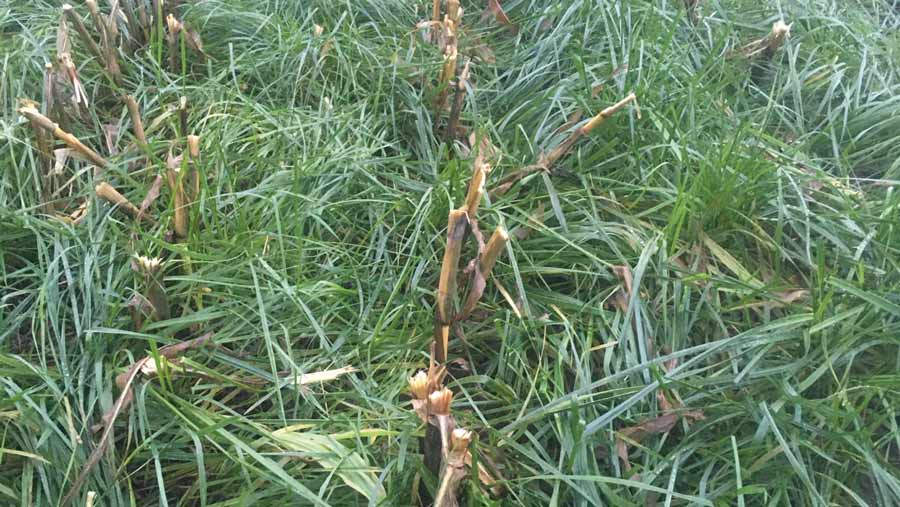 The aim is to keep grass growth below 200mm © Andrew Moore

In a nutshell, the benefits are: