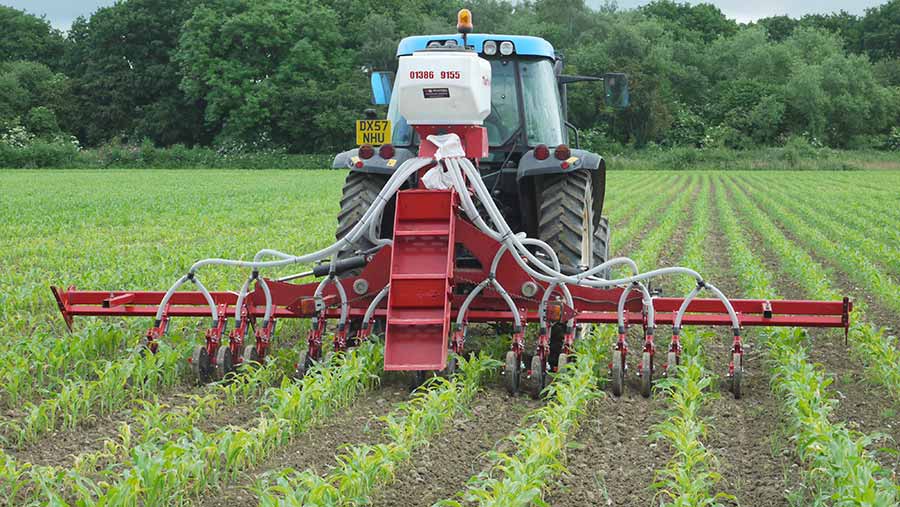 Overwintered maize stubbles can be a serious trouble spot for soil erosion and nutrient leaching into watercourses.

A popular method for sorting them out is to rip up the ground with a cultivator, allowing rain to pass though rather than run off the surface. This might reduce the soil erosion problem, but it doesn’t really help prevent nutrients going where they shouldn’t.

As a result, undersowing these crops with some sort of grass or cover crop is becoming increasingly important. The theory is that the roots of these crops help bind the soil together and lock up precious nutrients where they should be – in the field.

This cover can then be grazed in the spring or incorporated to add a bit of extra organic matter into the mix.

However, getting grass established in a maize crop isn’t that straightforward. Drill it with the maize and there is a good chance it will smother the crop and dent yields.

But try to plant it later and you either have to broadcast it into the growing crop or find some sort of specialist seeder that can sow the grass between the maize rows.

As part of a trial lead by river conservation charity the Wye and Usk Foundation, Presteigne-based contractor Roy Price and seed specialist Francis Dunne of Field Options worked out that the latter approach was the only reliable option. 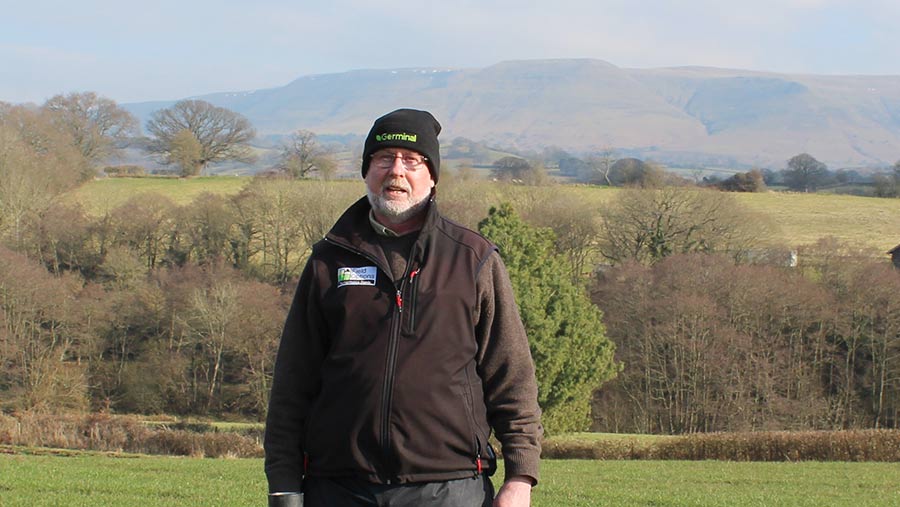 For a couple of years they had been investigating ways of reducing soil erosion and limiting the quantity of nutrients leaching into the local rivers.

They started by broadcasting grass seed and scratching it in with tine harrows, but this gave inconsistent results, particularly when there was little rainfall after planting. 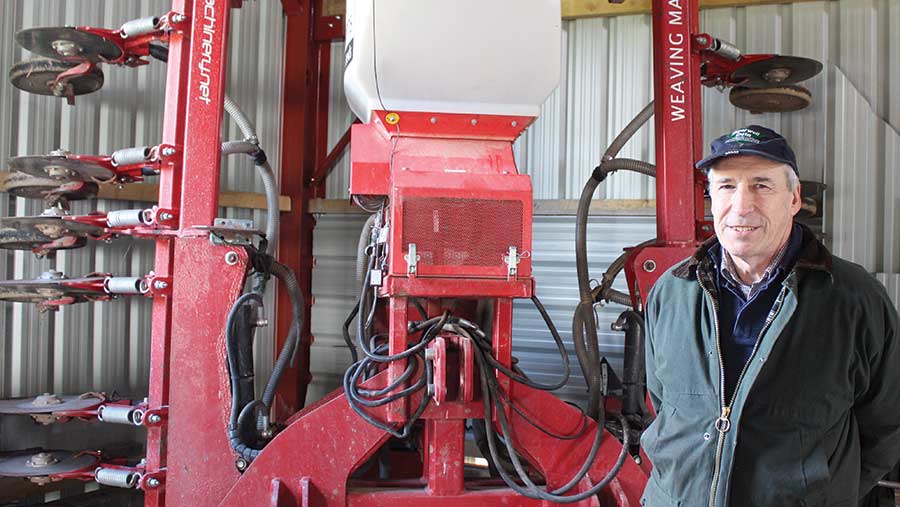 That is when Mr Dunne looked to Denmark, where farmers are not permitted to have any overwintered stubbles.

Over there, the solution for reliable establishment is to plant the seed into the growing crop with some form of disc coulter and press wheel.

The idea is that these have enough bite to penetrate dry and capped soils – so that the seed isn’t just dribbled on the surface – and the rear press wheel helps consolidate the seed-bed and conserve moisture.

With the principle established, it was up to Mr Price to fabricate a machine that could do the job.

Firstly, he went in search of a suitable coulter, which he ended up sourcing though Worcestershire-based Weaving Machinery.

These simple units have a double disc with adjustable spring tensioner and the all-important press wheel behind. They came in at about £180 apiece and he bought 16 units in total.

Initially, he planned to build his own frame, but at the time of ordering Weaving had a spare 6m hydraulic-folding unit available from another project, which it was selling for a reasonable price.

Once back at Mr Price’s workshop near Presteigne, Powys, the frame was modified by adding a new box-section toolbar at the back.

The coulters were then bolted to this and arranged so they would plant in the inter-rows between maize crops sown with either a six- or 12-row planter on 75cm spacings. 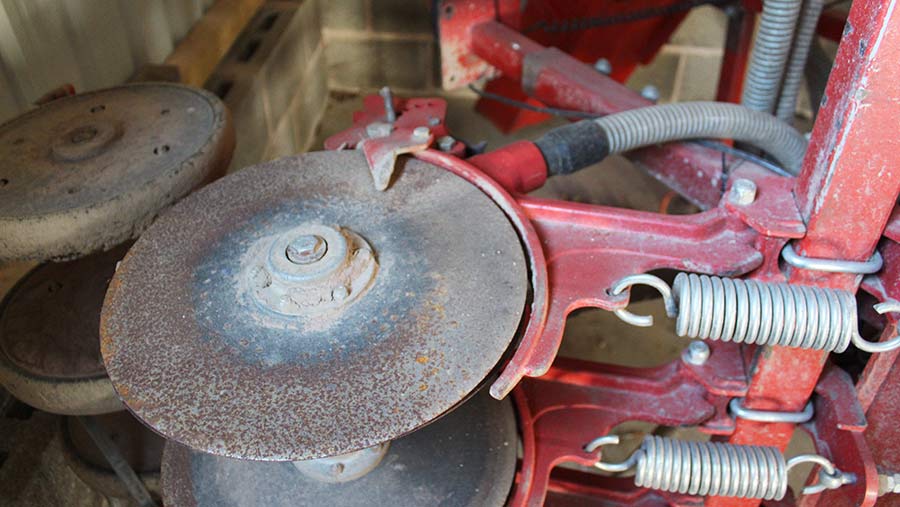 The result is that it sows either two or three rows of grass between each maize row.

As for the seeder, Mr Price got hold of a Stocks Ag pneumatic unit with electric fan and 10 outlets. He used eight of these to pipe the seed down to the toolbar, before fitting splitters so they would feed the 16 coulters.

Originally, the seeder came with a radar metering unit, but Mr Price found the leafy maize plants interfered with it. Therefore he swapped it for a GPS version that has been much more reliable.

Finishing touches included adding a set of steps from an old Massey Ferguson 825 combine to make filling a little easier.

As the drill is so light, Mr Price carries it on the rear linkage of his 115hp Landini Mythos tractor.

“You can get them down the rows OK, but they’re a bit tighter than I would like.”

He guides the machine by eye, rather than GPS, and has settled on 8kph as the best speed. This makes it easier to steer accurately and the spring coulters jiggle along, giving better penetration than a slow drag. 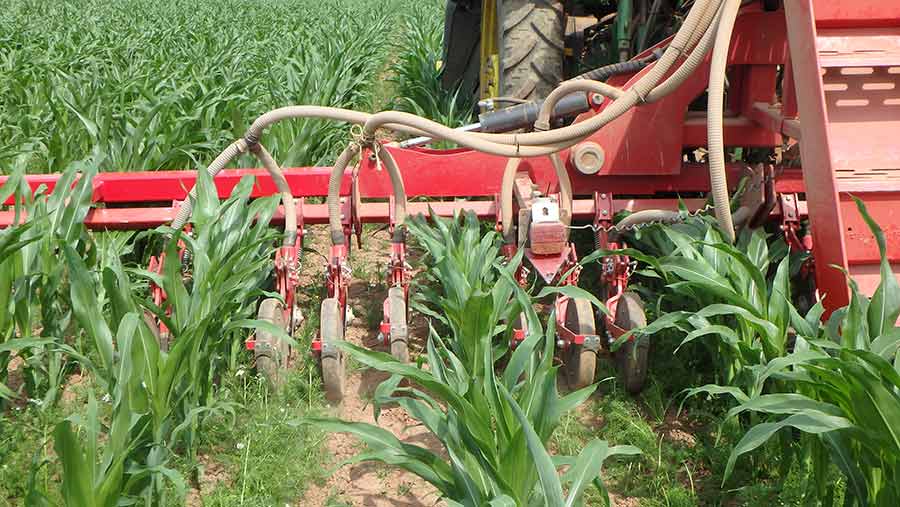 To improve coulter pressure further, he added a spacer on the spring, meaning he could crank them up a little tighter.

Since starting out in 2015, Mr Price hasn’t come across any conditions where the drill won’t work and there is usually very little seed left uncovered on the surface.

As well as working in crops drilled by six- and 12-row machines, they have established some in fields planted by an eight-row precision planter and a Mzuri strip-till drill.

Mr Price and Mr Dunne have found the ideal drilling time is from late May to early July, when the crop is between the three- and 10-leaf stages.

The earliest they will go in is one week after the last herbicide treatment – so that it doesn’t interfere with the germinating grass – and they can run until the crop is about knee-high.

Any time after that and it becomes hard to drive down the rows and the drill can potentially damage the crop.

As for varieties, they have been using various combinations of perennial and Italian ryegrasses. As the Italian strain is the more vigorous of the two, this should produce more dry matter yield over the following winter and spring. 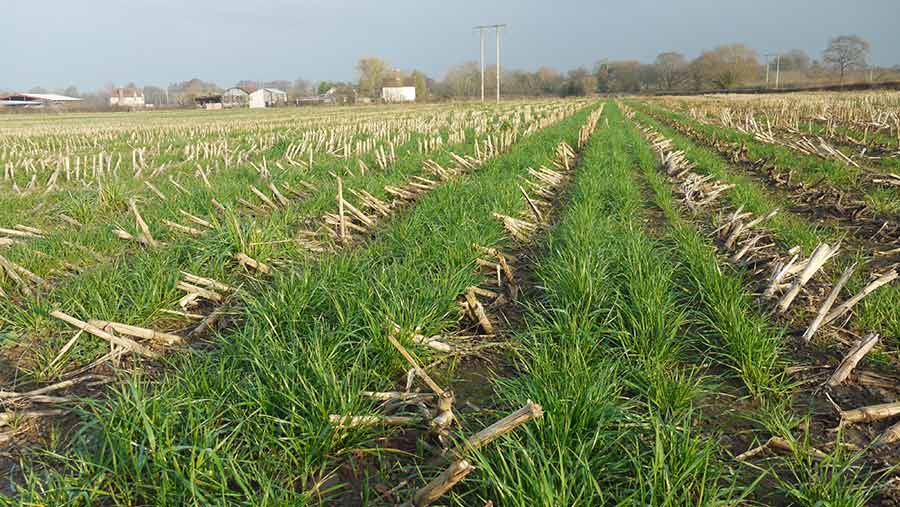 But according to Mr Dunne, the fact that there is some cover on the ground is more important than the quality of it. For this reason he usually suggests putting in a low-cost mix at a seed rate of about 18kg/ha. This accounts for 90% of what they have planted.

Some farmers have experimented with more complex mixes, including annual clovers or vetches to help build some fertility. However, it’s still a little early to see if these have any significant extra benefits.

One would assume a wet maize harvest would severely damage any grass that had been in the ground just a few months.

But stubbles that have been undersown with grass seem to hold together significantly better than those without, says Mr Dunne. “Even though there is not always a lot of cover on the top, the roots seem to help bind the soil together and reduce the amount of damage.”

That said, fields will often be too rough to get a decent silage cut, leaving grazing as the only real use for the ground before it is cultivated again. In an average year, this should offer up to 1,500 ewe grazing days/ha or up to 300 for heifers.

In the UK, any undersown areas also qualify as an ecological focus area (EFA) under the latest greening rules. However, it’s not recognised under the Welsh GAEC system.

The undersowing service is available through the Wye and Usk Foundation and Francis Dunne’s company, Field Options, and includes seed costs of £74/ha.

Currently the Wye and Usk Foundation offers a £5/acre subsidy, which brings this down to 62/ha. Costs can be higher for small areas or if the farm is a long distance away.

At the moment the team are establishing more than 80ha/year – split between 10 growers – and the area is increasing slowly. “Farmers are just starting to come to terms with the fact that something needs to done about overwintered maize stubbles,” says Mr Dunne.

“It’s not a cheap fix, but we know undersowing helps significantly.”

With the help of another contractor, Will Sayce at St Weonards, near Hereford, they can cover most of Herefordshire, south Shropshire and south-east Powys.