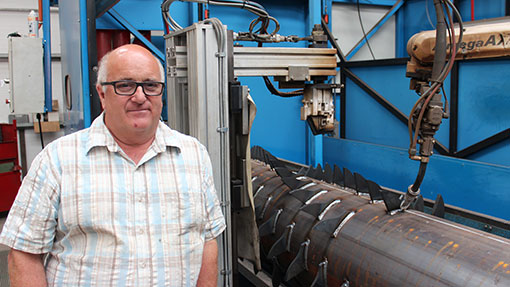 Got an old Kuhn power harrow sat out among the stingers? Oliver Mark knows a man that can get it running sweetly and looking smart again, and it’ll cost less than you might think

Power harrows are the trusty servants of all arable farms. Disused and abandoned in favour of more fashionable cultivation methods, you can always rely on them to stir up a half-decent tilth when the going gets tough (or wet).

If you decide you want to give your tin-worm-ravaged machine the kiss of life, or if you want a cheapish replacement, the man to speak to is Andy Guest.

He specialises in Kuhn power harrows, each of which he strips to bits, rebuilds, shot blasts and paints in two days at his base in Cotham, near Newark, Nottinghamshire.

See also: A guide to buying a used forager

The waiting list is about six weeks, but he claims to be able to resuscitate 98% of the neglected or worn-out machines he comes across.

“They’ve never scrimped on the quality of the metal, so hardly any of the machines we bring in have to be broken for spares.”

It’s no surprise that most of the machines that arrive on site have seen better days. Rust is a real problem where silty soils are concerned, and owners that aren’t keen on greasy fingers and oil changes will find the gears and bearings running a bit rough too.

Mr Guest takes no risks and strips each machine to the bare bones in an older section of his Cotham workshop thick with the smell of iron filings and old oil.

Grease is hoovered from the trough using an industrial vacuum – steam cleaning doesn’t get all the gunk and iron filings out – before it is filled with a gallon of diesel to help strip the muck from the metalwork.

Wearing parts are replaced as standard to guarantee that all the machines leave the workshop to the same quality. Heavy presses force off the old taper roller bearings before a new set is fitted and the lot is resealed.

All the worn parts are binned, and the scrap bucket weighs 50t by the end of the year. There’s another 6t of used grease and oil, which is sent to local power stations.

Harrows that need a little bit more TLC might also get new shafts or gears depending on the condition of the old ones.

“Shafts and gears tend to be pretty reliable in Kuhn machines, but that depends on the consistency of servicing,” says Mr Guest.

“If they’re shot we replace them with genuine Kuhn parts – last year we spent over £200,000 on Kuhn  metalwork – as well as the parts we make or have fabricated to suit particular machines.”

Any trouble is usually because the oil has never been drained and replaced, which should be an annual job if you want the machine to last. All the power is directed straight through the ‘box, so condensation can be a problem too, says Mr Guest.

New Kuhn-made tines and Guest-made blade holders are also part of the basic rebuild package. The whole lot is then bolted back together before being battered in the shot blaster to remove any manky rust pockets.

It then gets a recoat with primer, a lick of high-gloss paint and a set of new stickers. Once they’ve been fitted with a new pto and cam clutch all machines are also fired up for five minutes using a John Deere 7710 to make sure everything is hunky-dory.

The last piece of the power harrow jigsaw is a new packer roller which, along with the blade holders, is usually the first thing to wear out.

In fact, demand for new packers saw Mr Guest install a £150,000 robot welder to keep up with the work and bring production into the 21st century. It can weld all the long, shark’s fin teeth to a roller in just three-and-a-half hours and can churn out 200 rollers each year using 6t of welding wire.

If you’re after a quick fix, then there are also second-hand versions with plenty of acres left in the metalwork stored on site.

Alongside the power harrows, Mr Guest also deals with Accord drill refurbs. Most head out of the workshop piggy-backing the Kuhn harrows, and it’s clear that buying a reconditioned machine can offer serious cost savings over a new one.

Aside from the hopper, toolbar and coulter arms, most of the metalwork is dumped and replaced.

The popularity of power harrows has ebbed and flowed since Mr Guest first set up his fixing business 34 years ago.

Although they’re still considered a pretty archaic form of clod bashing, the soaking autumn of 2012 has seen lots of farmers  keep hold of their power harrows and ploughs for when days when it’s too wet for the Vaderstads and such like.

Japan is the biggest export market and takes about 12 refurbished machines each year, although the poor yen exchange rate has slowed things slightly.

Packs of spares also head to New Zealand, but the biggest market is the UK, where Mr Guest says demand is as high as ever.