Getting ground prepared for drilling can be an eye-wateringly expensive exercise if you are in a traditional heavy-tillage system, but there are plenty of innovative items out there that reduce passes, burn less diesel, wear less steel and ultimately save cold, hard cash.

Yorkshire-based firm Cultivating Solutions produces the RapidLift and linkage mounted RLM toolbars, both soil loosening implements that slot between the tractor and a trailed drill or cultivator.

The RLM can also be used as a standalone pan-busting machine.

Both are designed with cost saving in mind and also aim to improve accuracy and performance of the kit they are partnered with.

Farmers Weekly paid a visit to two users to see how they have integrated each into their respective establishment systems and how they are performing in the field. 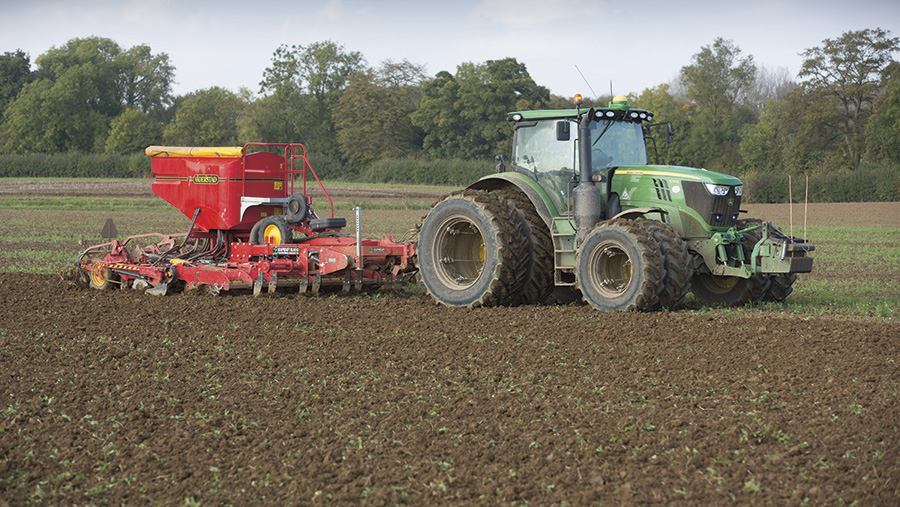 Cutting cost and compaction in Lincolnshire

Martin Reams, farm manager at GH Bowser, has seen a sharp fall in establishment costs and reduced soil compaction since purchasing an 4m RL400 for the Boston-based business last year.

Spread across 810ha of grade 1 silts near the coast to heavy clays at the foot of the Lincolnshire Wolds, there isn’t a one-size-fits-all cultivation system for the farm’s land.

The slump-prone silts require restructuring each year and in the past those soils have been sub-soiled, ploughed and pressed ahead of drilling wheat or vining peas.

Heading inland onto heavier dirt, land was prepared using a Simba Solo, flat lift and press, before being sprayed off and drilled with a Vaderstad RDA 400S Rapid, with each cultivation pass costing between £40-£50/ha.

In addition, a 300hp tractor was required to carry out much of the groundwork, so kit was heavy, ponderous and posed a high compaction risk.

“My thinking was that we should take the weight off the land. If you don’t have the weight on there in the first place, you shouldn’t have to pull compaction out again.

“With the previous system, you were also looking at more than £120/ha cost before drilling,” says Mr Reams. 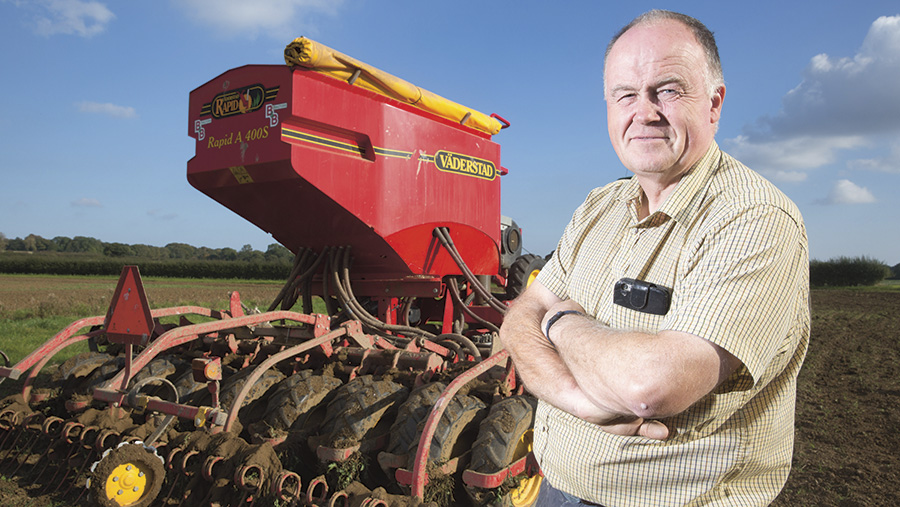 The toolbar fits neatly in front of the Vaderstad Rapid and its eight low-disturbance soil-loosening legs can work up to a depth of 300mm, effectively turning the drill into a one-pass machine.

Mr Reams says wheat seed-beds on the clay now have one or two passes with the Catros, followed by the RL400 plus Vaderstad, pulled by a John Deere 6215R on dual-wheels inflated to just 9psi for a lighter footprint.

The RL 400 also enables wheat drilling straight into the farm’s silts that have been turned over using a one-pass plough-press combination, saving a pass of the trailed press at a cost of £28/ha.

“Another of the big benefits is that it’s freed up a tractor to get to our better land earlier, so we can flatlift and plough when its dry – making the system more weatherproof.

“Last year, we were drilled up and all winter ploughing was finished on 22 October, whereas before it would have been end of October or into November,” says Mr Reams.

In addition, about £35/ha is saved during spring crop establishment, with the only extra cultivation required a Superflow chisel plough to level headlands.

“The investment in the RL400 was a combination of cost saving, improving efficiency and on our harder soils, the ability to use less horsepower.

Mr Reams singled out the RL400’s points for praise, as they are designed so wings protect the fixing nut and bolt, resulting in no half-worn nuts to grind or break off with hammer and chisel.

“You can change the whole set of eight in 10-15 minutes, so there isn’t much downtime.

“The only issue we’ve had is a few more slugs last year [on heavy land], but worked out that the Catros wasn’t set deep enough to incorporate the residue adequately, so we are running it deeper this season.” 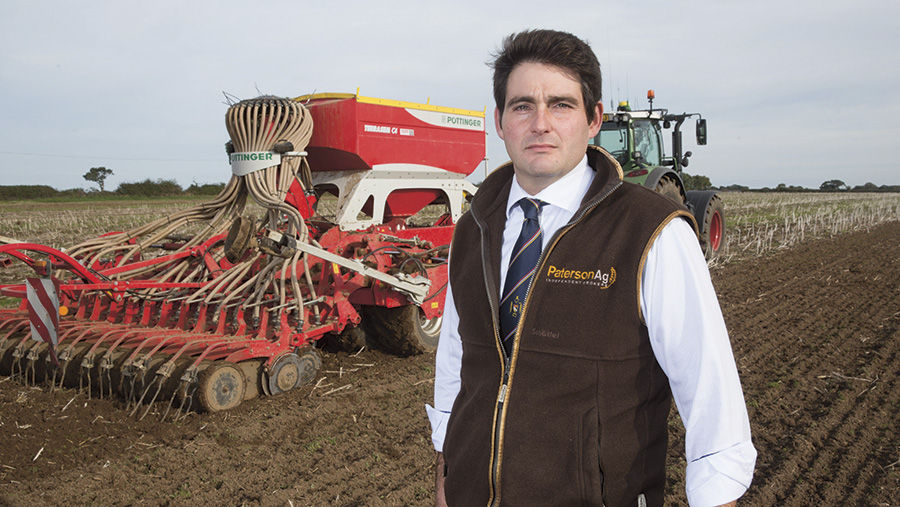 Reducing working depth and unnecessary cultivation have been the main drivers behind an overhaul of Luke Paterson’s crop establishment system over the past two seasons.

Mr Paterson was concerned the Knight Raven deep tine-disc cultivator he was using to work his medium sandy loam soils was causing compaction at depth, with the machine routinely working at 16-17in.

In turn, this leads to a sedimentation layer developing as finer soil particles are washed through the profile to settle on the tighter subsoil, providing a barrier that deep roots struggle to penetrate.

Looking for a solution, he had a mounted RapidLift (RLM) on demo in 2014 and used it ahead of his Pottinger Terrasem 4000T cultivator drill to establish some part fields of winter wheat.

Mr Paterson says there was little difference between crops established after the Raven or the RLM working at just 8in and this convinced him that he was working too deep for too little benefit. 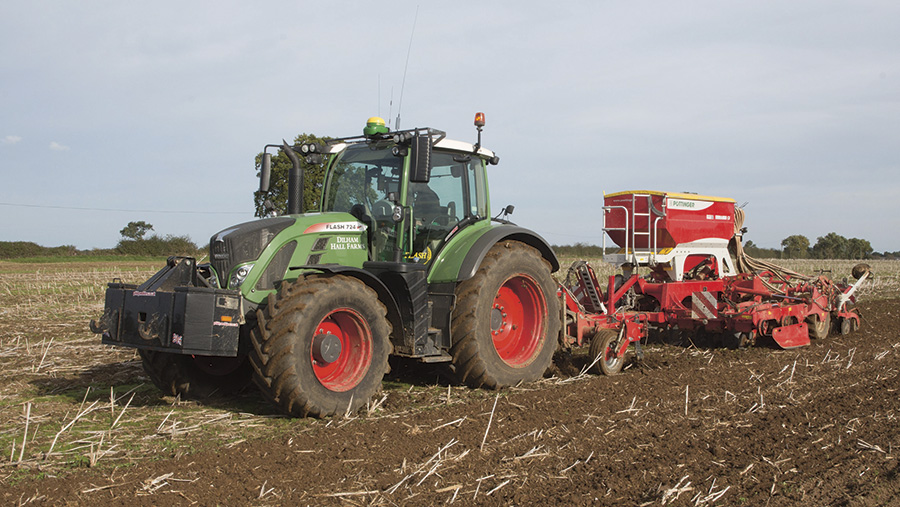 Subsequently, he has switched to the one-pass RLM-Pottinger combination to establish the majority of cereal crops across the 800ha of arable land he manages.

From pulling the Raven with a 260hp tractor burning about 45 litres/hr, the farm now has a 240hp Fendt 724 that requires just 7 litres/hr extra fuel to pull the RLM ahead of the drill.

“You are saving about 35 litres/hr, plus a man and tractor to carry out the extra cultivation.

“I think the main thing is how much cash we have saved. We still have the Raven to use when needed, but we are weaning ourselves off deep tillage and moving soil for the sake of moving soil,” says Mr Paterson.

Mr Paterson has a diverse rotation across the two farm units that includes roots, vining peas and some veg and salad crops and has been impressed with the RLM’s flexibility.

He says true direct drilling isn’t possible after potatoes, maize, sugar beet or vining peas, but the RLM has enabled him to drill cereals after these crops in just one pass.

The plough is used between winter wheat and winter barley, where the RLM is lifted out the ground for land work and dropped back in to freshen up trafficked headlands.

The toolbar has also enabled the Terrasem to be used as a strip-till oilseed rape drill, with liquid fert system dropping nutrients down the back its legs and the drill working with two coulters on and two off.

“What used to take three passes with the Raven, drill and fert spinner is now taking one.

“It is also helping with timeliness and all our rape was in between the 12 and 23 August this year.

“We can get it drilled early, despite the fact we are still combining.

“Before buying the RLM, it was a struggle,” explains Mr Paterson.

Slugs have been a bit of a battle when drilling wheat straight into oilseed rape stubble, so Mr Paterson’s agronomist advised him to work the land ahead of drilling.

To do this, he has invested in a second-hand set of light discs to chop up the trash ahead of first wheats this year. Mr Paterson is still not convinced this will help, however.

“The only other negative is the fact we need a weight block. The Fendt is a relatively light tractor anyway, so hanging the toolbar and the weight of the drill that far back makes the steering light, so we’ve put 2t at the front,” he explains.

The machine cost the farm in the region of £13,000, including depth wheels and tungsten points as extras and Mr Paterson has been impressed with the value and build quality.

“The legs are still going after two-and-a-half seasons, which is amazing really.

“We haven’t quite had payback in two years, but we will certainly have it within three. It isn’t often you can buy kit and get your money back so quickly,” he adds.