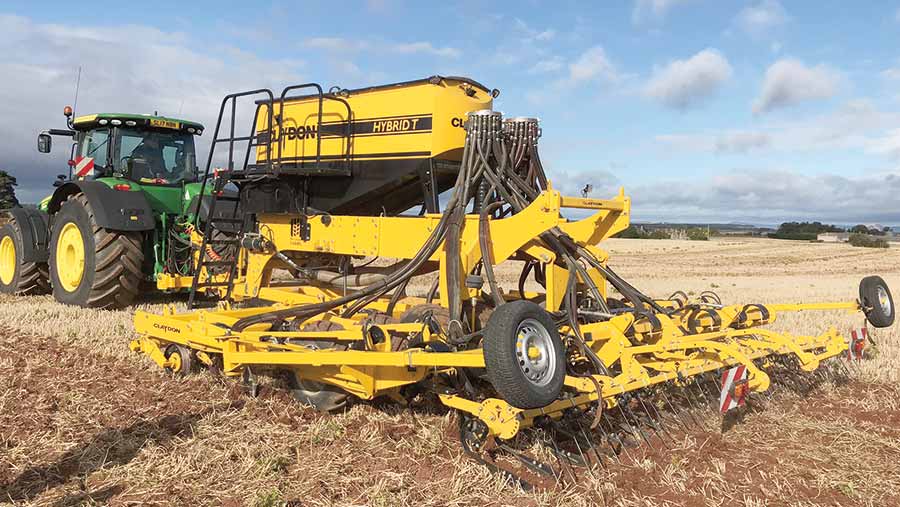 How best to get seed into blackgrass-ridden soils remains a topic of much debate, with Claydon continuing to champion the benefits of band sowing and intermediate tillage.

The Suffolk maker was giving a run-out to its 6m Hybrid T, which was towed by a John Deere 8400R at the event.

Soil-engaging components start with a front disc to slice through trash before a lead tine tears a drainage channel below each row, to a typical depth of about 15cm for oilseed rape crops or 10cm for wheat.

This also helps alleviate any deeper compaction ahead of the duck-foot share.

The version on show was fitted with an 18cm-wide point – there are other options down to about 7cm wide – which stirs up a shallow tilth to provide a decent growing medium for the crop. This should give the plants the strongest possible start, says Claydon, and helps them compete with any germinating weed seeds.

Row centres are spaced at between 30 and 33cm and seed is dropped in an 18cm band, so it leaves a gap of roughly 12cm between each row.

The 6m trailed version carries a 5,000-litre hopper (split 60/40 for seed and fertiliser) that runs through two KV Accord metering units. The whole unit weighs about 9t and costs the thick end of £100,000.

The company suggests encouraging weed seeds to chit using several passes of a straw harrow before  drilling. And this year has been particularly successful for growers geared up for straw harrowing – the early harvest has allowed plenty of passes that Claydon reckons are up to four times cheaper than an application of glyphosate.

It says 25ha/hour is possible and the lightweight nature of the work means the tractor should burn very little diesel, too. 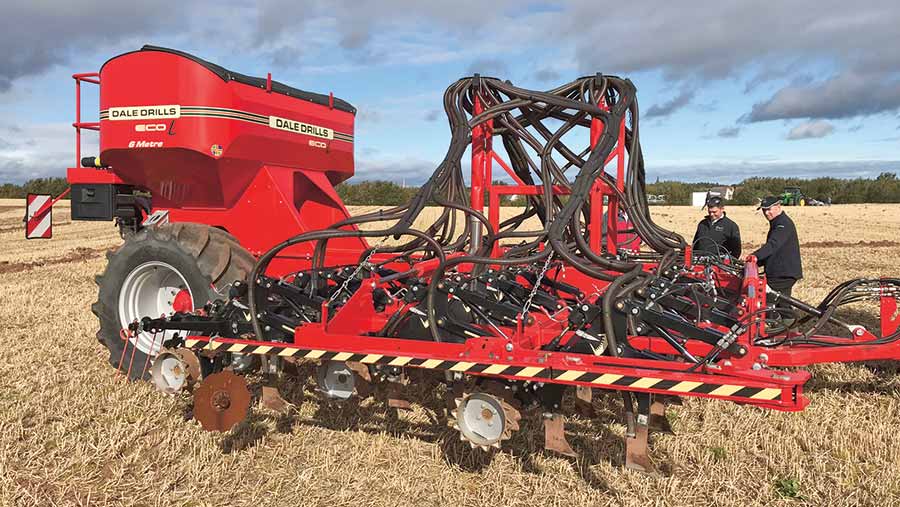 Dale opts for a tine-type leg on its drills, but differs from the likes of Claydon in its approach to getting seed into the ground.

The company’s James Dale says the Eco Drill can provide the perfect stepping stone for Scottish growers who are keen to gradually trim down on cultivation work.

Short post-harvest working windows north of the border mean lots of farmers remain reluctant to commit fully to a non-inversion system that may mean having to run a direct drill in the wet.

However, Dale says its machine will work in prepared seed beds, which gives owners the chance to make a gradual shift towards eliminating tillage. This starts by leaving organic matter on the surface and building more resilient soils that better handle rain and remain fairly friable in the wet, he says.

The system uses a 12mm-wide tungsten-tipped tine that runs at drilling depth and works only in the topsoil. This means it shouldn’t haul up any big clods, it provides better seed-to-soil contact and doesn’t mix weed seeds through the soil profile.

The position of the tines is adjustable – they are typically spaced about 130mm apart – and working depth is set on the wide press wheels behind each coulter, which also work to firm the soil around the seed.

One of the big perks of a fairly low-disturbance system is the power demand – Dale suggests gearing up with about 25hp/m, so the 6m model on show needs about 150hp to hit the 10kph target speed.

The 6m Eco L, pulled at the show by a John Deere 6175R, runs with the wheels and 4,200-litre hopper at the back. That’s good for about 3t of wheat seed and is split 50/50 to lay fertiliser at the same time, running through an Accord metering system and RDS controller. 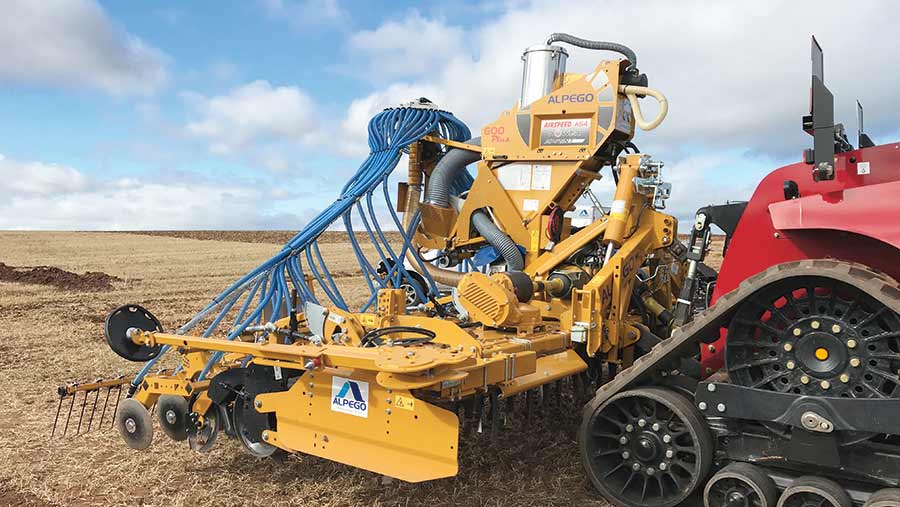 Alpego caught the eye of passing punters with its 6m Air Speed AS4 combi air drill – a set-up that remains popular in Scotland.

Sitting on the back of a Case-IH Quadtrac 620, the rig comes with the option of running the Italian company’s lighter DKS power-harrow with a maximum power capacity of 350hp, or the heavier Dmax that can handle more like 500hp.

The drill’s stand-out feature is in the distribution of seed. For a start, it runs a separate 1,400-litre hopper but, unusually, it requires no hydraulic or electrical services to pump grain through to the external stainless-steel distribution head.

Instead, it uses a second 150-litre intermediate hopper that looks something like a tea urn and stores a small amount of seed ready to be sent to the coulters.

This has a sensor inside it, so when it gets near to being empty it sucks more seed from the hopper through a single length of flexi-pipe. This usually takes about 30 seconds.

According to Alpego, this set-up prevents overseeding at headlands as the metered seed has to travel only a short distance to the coulters.

The 355mm angled disc coulters mount on rubber blocks and provide downward pressure of up to 60kg.

The company offers the system in 4m, 5m and 6m widths and, because the hopper is carried separately, it can comfortably fold to 2.5m for the road. This layout also helps balance the tractor.

On-farm prices start at about £70,000 when kitted out with the higher-spec power-harrow, and the company also offers a seed and fertiliser option called the AS Max. 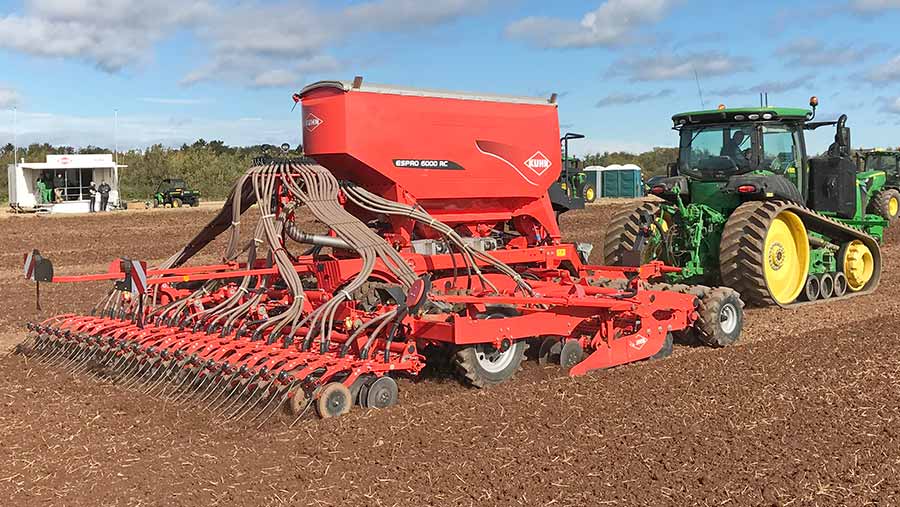 An ideal contractor’s drill was on show on the Kuhn stand in the form of the 6m Espro, which has an optional split hopper allowing it to lay two products at once through two metering units.

The 5,500-litre hopper is split 60/40 and will keep you going for a decent chunk of the day. The arrangement is especially handy when switching between various farms and seed varieties.

Pulled by a JD 8370RT at the show, the Espro 6000 may not be as wide as some other disc drills on the market but, Kuhn says, it is a bit handier in smaller fields.

There are two smaller models in the Espro range – 3m and 4m – and, unlike some other competitors where the coulter bar sits under the drill’s main frame, the Espro keeps the bank of coulters to the rear, so operators don’t have to climb over the back to clear blocked pipes.

A double-disc coulter system uses two 350mm discs set at 41mm offset to slice through the soil and trash to lay the seed in the terrace created by the disc, with a following press wheel and harrow to close the slot.

The Espro 6000RC needs about 300hp of tractor and can reach speeds of 17kph when in work. 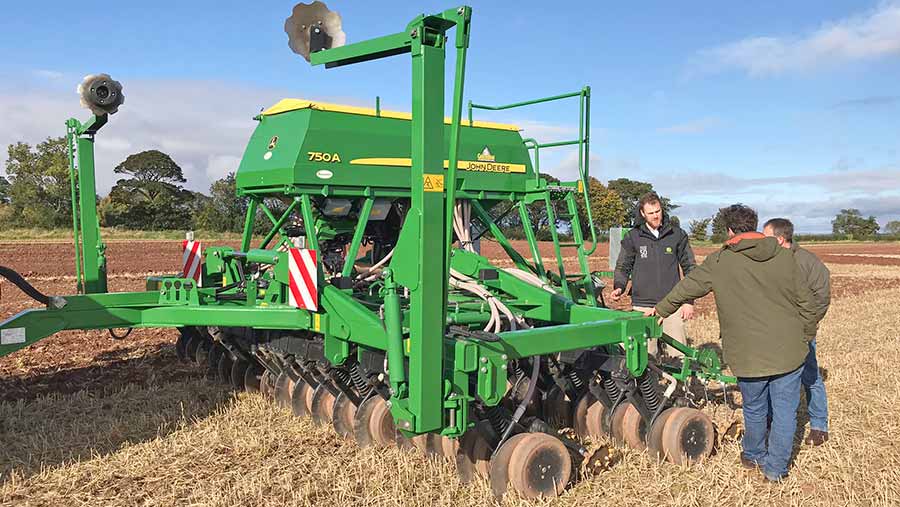 The popularity of Deere’s 750A all-till drill is still on the up thanks to the direct drilling craze sweeping across UK agriculture.

With this in mind, the American giant has popped back home and brought over the Pro Series opener that is available on its drills across the pond. This will replace the old-style coulter setup seen over here.

Key differences include a narrower sprung seed boot that sits alongside the 18in disc and places the seed into the terrace. A following seed tab attaches to the rear of the boot and holds the seed in place to prevent any bouncing around in the groove.

To press the seed further into the soil, a narrow rubber closing wheel runs behind the tab and has three manually adjustable pressure settings, depending on how deep and heavily pressed you require the seed.

There’s now only one grease point on the whole coulter unit – down from three on the previous UK models – and an optional spoked depth wheel will help limit the wheels bunging up in wet conditions and allow soil to escape easily.

A spiked closing wheel is similar to the one used in the US and, handily, Deere has made all the parts retrofitable. This means that if you need to replace some of your coulter parts on an older 750A, you can upgrade to the new designs, which should slot straight into the holes vacated by the old parts.

The coulter can be ordered now for delivery in time for next spring. 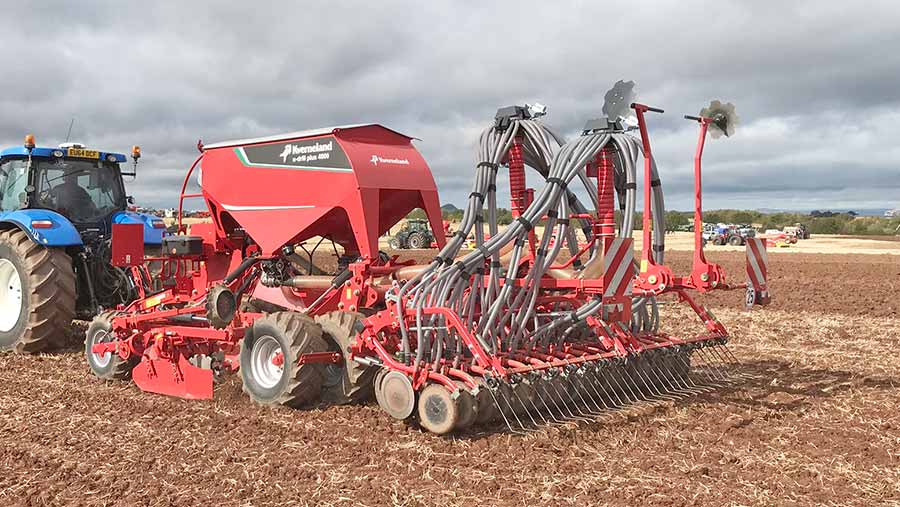 On the packed Kverneland stand was a new U-drill Plus 4000 model that fills the gap between the current 3m and 6m options.

The hydraulically folding machine is almost identical to its siblings and has a row of wheels followed by discs, with coulters to the rear.

Typical of many combination drills on the market, the 3,000-litre split 60/40 tank can deliver two types of seed or fertiliser from separate metering units and distribution heads.

Adjustments for depth control are done electrically from the cab by altering the disc height. The drill is fully compatible with Isobus and can be set up to lift out and lower into work on one button.

There’s also the option to drill at half widths and a tug of around 180hp should be sufficient. However, you’ll have to part with about £112,000 for the split-tank model, which will be available next spring. 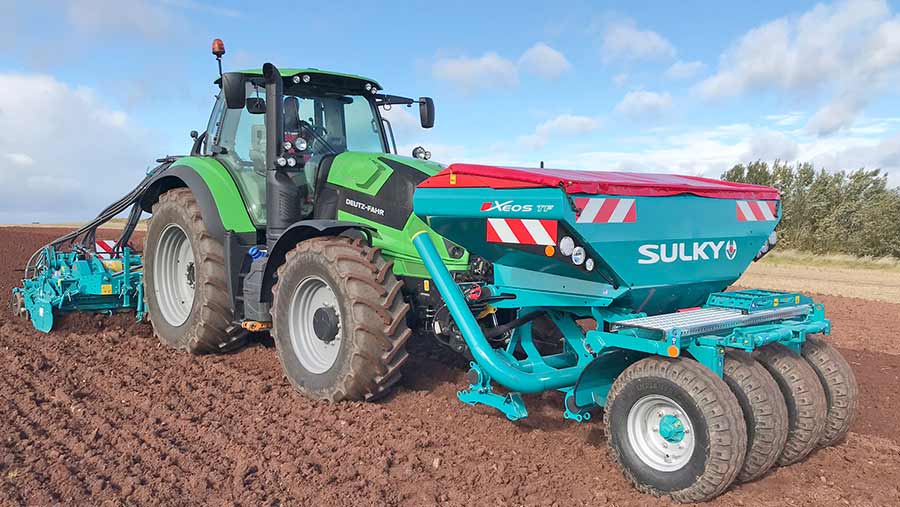 The Xeos front tank can hold 1,800 litres and provides extra weight on the tractor’s front linkage. It can also be specced with a set of four wheels to take the weight, which then works as a press to break up the ground before the following combination setup.

Options to the rear include the Cultiline power-harrow – ideal for seeding into ploughed ground – or a set of discs to chop up the stubbles before the coulters.

The drill has a redesigned distribution head, so the seed is now dispersed at an even rate across the full width of the drill. The pipe network has also had a rejig and instead of narrowing the passage, it allows seed to pass through with minimal interruption. This is ideal when drilling at low seed rates, Sulky says.

The new drill is available now, with an optional split front hopper for seed and fertiliser application coming next year.