There was plenty of feeding, bedding and livestock handling equipment on show at this year’s Dairy Event and Livestock show, as David Cousins and Emily Padfield report.

This year’s event featured a new handler demo area, where telehandlers and front loaders from makers as diverse as Ausa, Merlo, Deere, New Holland, Claas, MF, Redrock, Kramer and Alo were put through their paces shifting bales on and off a trailer, loading muck and moving fertiliser bags and wrapped round bales.

This compact T204H telehandler from Spanish firm Ausa (below) got its first showing at an agricultural event. It will lift 2t to a height of 4.2m and its compact dimensions – just 1.6m wide and 2m tall – means it’s ideal for those with cramped yards and buildings. It has a 54hp Kubota engine and retails at £30,800.

Dutch firm Lely, like a number of other big equipment firms, is putting a lot of investment into robotic livestock equipment. It has sold 5000 robot milkers around the world on the basis of their labour-saving and cow welfare-friendly qualities. Its Discovery robot muckscraper (below) designed to work on slatted floors, is gradually building up a UK customer base with nearly 20 sold.

This unmanned £10,000 self-recharging unit works round the clock, using sonar to avoid obstacles. It also scores on the welfare front compared with mechanical and tractor-mounted scrapers, as it does its work almost unnoticed by cows.

Lely’s Commodus cubicle (below), announced this time last year, has finally gone on sale. Its plastic cubicle dividers, lack of side rails and rubber-mounted top rail all help cow welfare. The top rail can also be removed completely if a cow needs to be shifted. Cost is £200 a cow, including the mounting frame that bolts into the concrete floor. 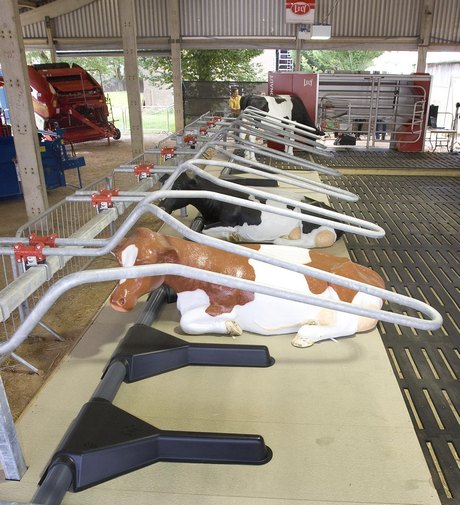 Thomas and Fontaine, which has offered an Environment Agency-approved tyre-baling service (below) for the past two years, reports that it has just baled its millionth tyre. Impressive, but with an estimated 50m-150m redundant car tyres still knocking about on UK livestock farms, there is some way to go before the national tyre surplus is dealt with.

Most popular uses for the 120-tyre wired bales are for reinforcing otherwise-boggy gateways (four bales plus 50-150mm of aggregate on top) or around ring feeders (4-6 bales plus woodchips) or water troughs. Baling cost is 50-70p a tyre. 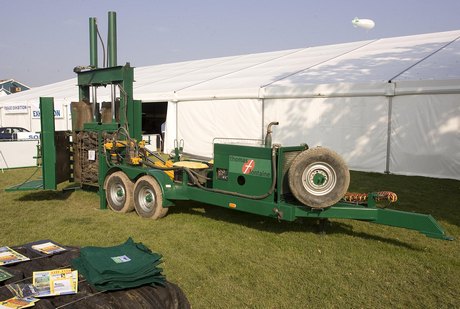 JF-Stoll was showing this Brick 2008DE (below) new straw plus silage feeder/bedder from French maker Belair. It has a 2.5cu m capacity and can be trailed or linkage mounted. It can chop and feed out silage or straw and is aimed at beef and dairy farmers alike. Cost is £13,250 for the linkage-mounted version.

JF-Stoll’s Martin Holden also reported that 2008 was proving to be its best year for trailed forager sales for five years, as contractors traded in smaller self-propelleds for the extra flexibility of a big trailed machine like its FC1355. A metal detector will be available soon, too. 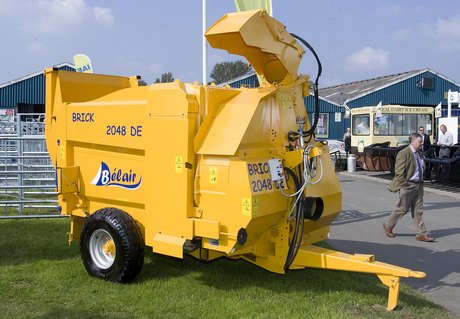 French firm Lucas G is best known in the UK for its straw bedders, but this Qualimix 200M feeder (below) shows it makes bigger kit, too. This £36,000 20cu m feeder has two contra-rotating rotors on one side of the machine, the top one with knives for cutting and the lower one for mixing. On the other side, there’s also a large mixing paddle. It claims to be able to cut and mix a load in less than three minutes. 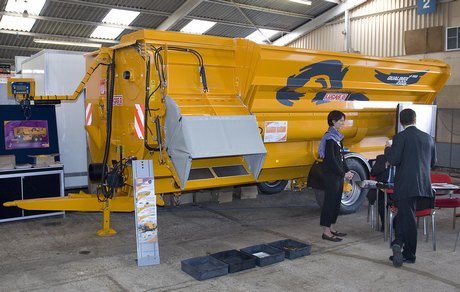 Leicester firm Capital Seating and Vision had a range of camera and monitor systems for keeping an eye on otherwise-unseen parts of combines, potato harvesters, tractor hitches and seed drill hoppers. The cheapest system on offer has a black-and-white camera with infra-red for night-time viewing and microphone, plus a 4.5in monitor for £165 + VAT.

At the other end of the scale you can opt for a 9in split-screen system (below) that can show images from up to four colour cameras simultaneously for £580. These are all wired systems. The firm plans to introduce a wireless version, but says it first needs to sort out the interference problems that can plague wirelss technology. 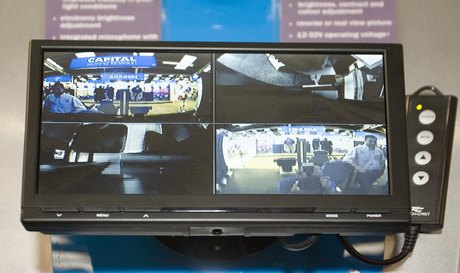 As regulations on slurry storage and odour toughen, closed storage systems like this Eco-Bag from Dutch firm Wiefferink start to look attractive. Capable of holding 200-5000cu m of slurry, the 0.8mm-thick green pvc material lasts for 20 years. It requires an earth bund around it and slurry is pumped in via a valve underneath.

Visually unintrusive and odour-free, it costs £20-£25/cu m – cheaper, it says, than concrete equivalents. It can also be dismantled, moved and set up again in another location. Wiefferink says it sells about £150 units a year in its home market.

UK sales will be through Biogas Nord at Templecombe, Somerset.

Want to know more about the Dairy Event and Livestock Show?