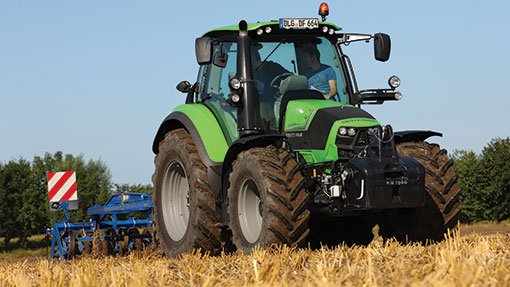 Deutz-Fahr has been on a mission to update its higher horsepower tractors. They now have plenty of and radical styling, but the DLG results suggest there’s still room for improvement under the apple green tinwork. Base price: £98,033

Deutz’s bubble-shaped cab sits high above the rear wheels. It’s cosier than some of its test rivals and the light grey and cream colour scheme doesn’t lend itself to mucky hands and oily boiler suits.

Access through the left-hand door is OK with the second seat folded up, but the curve of the cab frame and limited lift of the spring-loaded steering wheel means clambering in won’t be so easy for bigger-boned operators.

The seat is decked out in light-coloured rhino hide leather and doesn’t swivel, which might be a disadvantage for those spending long hours looking backwards. It also sits a long way forward of the rear window and can mean the handbrake automatically applies itself when you peer over at the lower link arms.

The cab pillars can interfere with the view rearwards and to the side and the seat feels a long distance from the back window. This arrangement also wastes space and makes it harder to get a good look at the links, but the high seating position benefits the view over the dash and bonnet.

The biggest change inside the cabin is the new armrest. It’s well marked with colours and symbols, so even tractor-driving dinosaurs should be able to work out what’s what. Buttons are backlit and appear green when engaged, which also helped bump up its ergonomics score.

Most of the magic happens through the main joystick. It’s plastered in rubber buttons for the key controls including forwards/backwards, cruise speeds, spools and the linkage. Add that to the touchscreen iMonitor 2 (built by TopCon but dressed by Deutz) and the Agrotron looks like a pretty sophisticated tractor.

There’s a second monitor on the A-pillar, which requires less in the digital dexterity department. It displays most tractor settings and can be used as an adequate alternative if you don’t have the bigger iMonitor screen.

Bringing in external controls is less convenient, though. The iMonitor already hogs a fair chunk of the right-hand window space, although rubber bungs conceal a couple of potential mounting points.

The road team reported a sensitive throttle pedal but good mirror arrangement with wide angle mirrors either side.

The pneumatic cab suspension and axle suspension provided good comfort, but at just under 77dBa the Agrotron was the loudest tractor tested.

Agrotron engines are sourced from the Deutz engine division. It pushed out a maximum of 144hp (boosted) at the pto in the DLG tests, with a specific consumption of 245g/kWh to leave it a nose ahead of the AdBlue-free Deere.

But catering for AdBlue use took total consumption to 253g/kWh and left the Deutz trailing the pack. The high speed of the fan and large hydraulic pump fitted to our test machine didn’t help the tractor’s considerable thirst for cherryade.

However, Deutz claims the tractor’s engine software was not programmed correctly and has sent the 6-series back to the DLG for further testing.

In the six-point measurement, which always proves a good indicator of all-round fuel efficiency, the Deutz tallied 277g/kWh (boosted) to leave it a distant last. Once AdBlue had been taken into account total consumption came in at a comparatively bad 289g/kWh – 20g/kWh behind the group average. However, the 36% constant power range provided a welcome light at the end of a pretty dark tunnel.

Engine functions include two memory speeds, which are positioned on the main armrest rather than the joystick. The usual press-and-hold system is a quick way of setting the speed, but it can also be programmed from the terminal.

Gearbox specialist ZF supplies the Agrotron’s stepless transmission. The tractor’s driving speed is limited to an adjustable value at start-up, but nudging the handstick releases the transmission up to its maximum 50kph.

Pedal mode is the default driving style – it sees engine revs adjusted to match the driving requirements – although manual or pto mode can also be selected by thumbing an armrest button. If you want to drive it Fendt-style on the drivestick you must activate one of the two cruise speeds in each direction. Then you can use the stick to slow down and speed up.

However, this also changes the recorded cruise speed and there’s no quick way of returning to the set speed. It seems an unusual way to do things, particularly because there is already a scroller on the handstick to fine-tune the cruise speed.

During work we also found that switching from the cruise speed to the foot throttle at headlands came with a bit of a thud.

Despite that, there are plenty of opportunities to adjust transmission settings. Swivelling a dial labelled ‘ACC’ adjusts the acceleration, for instance. There’s another similar button under the armrest that has a looping label with ‘eco’ at one end and ‘power’ at the other, which sets the engine rev range in which you’d like to work.

The severity of the orange shuttle stick can be adjusted in five stages, but these are pretty indistinguishable. Directional changes can also be made on the handstick by holding a hidden button on its back.

The DLG recorded the Agrotron’s maximum tractive power as 118hp. In the draft test the Deutz recorded a specific consumption of 293g/kWh, or 303g/kWh including AdBlue – both above average.

Orange coloured buttons on the armrest engage four-wheel drive and diff-lock. There’s also an ASM button, which controls the automatic engagement/disengagement of both. The trigger points for the ASM – steering angle or driving speed – are adjusted in the monitor.

However, turning circle was a slightly clumsy 12m – 1.4m larger than the test best – and three-and-a-quarter turns took the wheels from lock-to-lock.

At almost 7.4t, the Deutz was also the heaviest tractor tested. Gross vehicle weight was 10.5t, which left just a 3.1t payload – well under the test average.

The Deutz had some decent rear hardware and, at 8.1t, had the best lift capacity of the test gang.

All of the linkage controls are coloured green and, although Deutz sticks with its locking linkage and hydraulics system, it’s pretty simple to use once you know it’s there. Quick lift buttons are mounted on the joystick and there’s a rocker switch for controlling the linkage when coupling to implements.

The rest of the dials and knobs are simple. There’s no need to delve into the depths of the screen – most functions have quick adjustments by dials under the armrest cover.

Outside, there are fender controls both sides and the Agrotron’s hydraulic pump will push 164 litres/min at two valves, leaving it second only to the Valtra. Our well-specced test tractor had five double-acting spools, two of which were controlled through small rollers on the armrest, three by fingertip paddles and there’s also a cross lever.

The test team felt the labelling of hydraulic connections could be improved. This included the spool re-assignment, which might be difficult to decipher if you don’t know your way around the screen.

Flow and time adjustments can be made on the iMonitor screen for each valve. The system is almost idiot-proof and you can also make changes on the smaller pillar-mounted screen.

A two-speed mechanical lever swings between 540 and 1,000 and a second lever selects eco or normal mode.

A yellow flick switch starts and stops the pto spinning and there’s an auto button neighbouring it on the armrest. You can set the automatic switching points for the pto on the monitor, too.